Skip to main content
Player of the Day: Dylan Remick
Find out more about #15 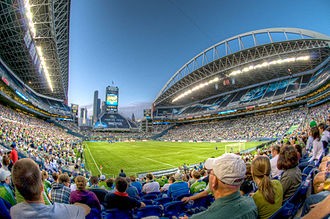 As a youth, Remick played for Loyola Academy, where he earned a letter each of the four years he played. Remick’s junior career began in 2009. He played for FC United. Later, he joined the Brown Bears and stayed with the team from 2009 to 2012. He helped the team qualify for the NCAA tournament for three years in a row. In his junior year, he even won the Ivy League title. He tied several records at Brown as well, including the record for shutouts during those same three seasons. His senior career began in 2012 when he played for the Worcester Hydra. He made four appearances and scored one goal for the team.

The Sounders acquired Remick in 2013 and he’s been with the team ever since. He was the 35th pick during the 2013 MLS SuperDraft, and Seattle’s second choice. He has made 33 appearances with the team, scoring no goals. He went on loan to the Sounders FC 2 team in 2015 for a single appearance.

Sounders FC head coach Sigi Schmid says that he’s always been happy with Remick’s work, praising his athletic abilities and calling Remick a versatile backline player. He also says that Remick is always improving, a quality that any coach could hope for in a player.

Remick receives inspiration from a variety of famous athletes. He says that his all-time favorite athlete is Michael Jordan. Other favorite athletes include David Villa and Gareth Bale, with Tottenham Hotspur in EPL and Rayo Vallecano in La Liga as his favorite teams. His secret to getting into the zone? Listening to Taylor Swift’s songs before he plays! Athleticism runs in Remick’s family. He has a sister and a brother. The former is on the Princeton University swim team. The latter, Remick’s twin, is a runner at USC.

Fans can check in with Remick on his Twitter page, @dylanremick15. His profile simply reads, “Professional Soccer player for the Seattle Sounders. Brown Alum.” He joined the social network in May 2011 and shares photos, videos, the latest news and other content with his fans. On the page, he says, “Always hungry for more, but proud of this team and happy to be a part of it this year!”

He is pretty versatile and

He is pretty versatile and you need that out of a lot of players really.