Skip to main content
NFL
Why Sunday's game is going to be way different
New weapons more Seattle, a new attitude for Carolina 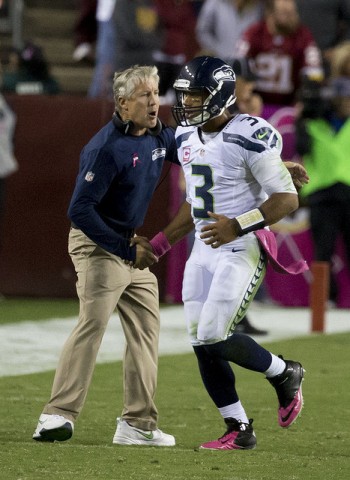 For what seems like the 22nd time since Russell Wilson took over as quarterback in Seattle, the Carolina Panthers and Seattle Seahawks will face either for the second time this season, and for the second year in a row they will play each other in the playoffs.

They play each other almost as much as they do their divisional opponents, and it looks like Cam Newton-Russell Wilson is the rivalry Wilson was supposed to have with Colin Kaepernick. Although Newton-Wilson looks to be much more exciting than that one would have been.

This time around however, much has changed. Not just from when they played at Century Link Field in the NFC Divisional round last year, but from when the two played in Seattle back in Week 6.

“They’re a completely different team,” said Panthers quarterback Cam Newton about the Seahawks. That they are, the Seahawks seem to have their swagger back, and after last Sunday’s (lucky) win in a frozen over Minneapolis, they probably feel invincible.

Carolina is most definitely different than when the two played in the playoffs last year. Carolina lost that game 31-17 with Kam Chancellor being the hero with a key interception.

Let’s start with the Seahawks, as Carolina can basically throw out the film from the Week 6 game.

There’s the obvious, as Jimmy Graham is out and Marshawn Lynch may not be in the lineup either. But without either player in the lineup in the Seahawks’ late season surge, they’ve been able to uncover a very efficient offense. Doug Baldwin has suddenly become a handful for opposing secondary’s, but he’s not the only weapon to emerge out of Seattle’s receiving corps.

Tyler Lockett was not much of a factor for the offense when the two teams first played each other. In fact he had zero receptions. Since then however, Lockett has become key to the Seahawks passing attack.

Since the Carolina game, Lockett has recorded 39 catches for 526 yards, and all six of his touchdowns. Of course, he is an All-Pro returner, but his new role on offense will cause problems for Carolina. Josh Norman can’t cover him and Doug Baldwin at the same time after all.

The Seahawks secondary has undergone much change as well. Cam Newton will no longer be able to pick on the departed Cary Williams again and again as he did previously.

Deshawn Shead has taken his place and done so wonderfully. He’s defended eight passes this season, and paired with Richard Sherman Carolina’s receivers are at a huge skill disadvantage.

For the Panthers, a few things have changed, although not so much in the form of personnel. Cam Newton is still under center, but he has matured into the likely MVP, all without a headlining cast of receivers to throw to.

There’s also the intangible advantages the Panthers have now too. After pulling out their win in Seattle, and a 15-1 season, Seattle no longer has the mental edge over Carolina, after beating them repeatedly the past three years.

Couple that with their home field advantage, where the Panthers have won 11 straight at Bank of America Stadium, and the Panthers are coming into Sunday’s game supremely confident.

Expect another physical, blow-for-blow battle in Charlotte. Neither team has scored more than 16 points the last three times the two have played on Carolina’s home turf. Each of those three times the Seahawks came away with the victory.