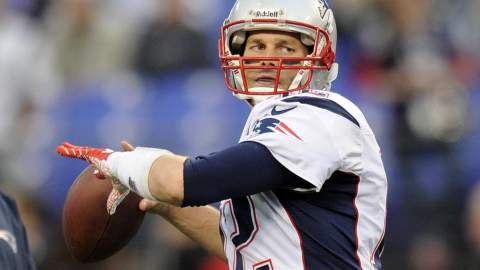 As a Pats fan, I'm excited.

I'm not here to gloat, because I know what it feels like to lose a Super Bowl in the heart-wrenching, soul-gutting fashion Hawks fans just did. I thought last night was to be a third such occurrence. I even muttered, "it's not fair" to myself when that juggling catch was made. If not for the worst play call in football history, you'd be celebrating instead of me.

But I do have to ask… given that the old-timer Brady threw perfectly inflated balls to the tune of 328 yards and 4 TD's (including 2 into the violent, gnashing steel teeth of admittedly the best defense in the game today... in the 4th quarter down by 14, with his very career hanging in the balance…) do you acquiesce that he is, in fact, inarguably the greatest quarterback ever to live?

Or at the very least, that he is the greatest one to live so far?

No walking on eggs required here, bro'.  We're grownups.  You should be excited - Tom Brady's legacy went from "One of the best ever" to "The best ever."  There was never a quarterback who accomplished what he has accomplished.

Other camera angles will ask about passer rating, or yards per attempt, or supporting cast, or what have you.  But SSI's camera angle focuses on the finish line, the object of the game.  Tom Brady has real cause to have made good his fans' claims that he is the most valuable football player who ever lived.

Maybe he and Bill Russell can argue about who is the most valuable NFL / NBA / MLB athlete ever.

You have probably seen this pre-2014 season article, Dave -- Tom Brady Looks Better than Ever -- but some of our SSI readers have not.  The short summary:  Brady micromanages his schedule like the POTUS, every minute accounted for, and it's mapped until his mid-40's.  True, Manning and Wilson live in the film room, but Brady takes his life management to another level.

The contrast against Peyton Manning is telling.  According to Pro Football Reference, Manning has the highest "approximate value" of any player ever.  You can make any number of arguments you want, that Peyton Manning is nature's perfect quarterback - the 6'5", 230" golden boy who (according to Rams' coaches who let him goof off on the practice field) was better at age 19 than Jim Everett was in the prime of his career.

But going up against exactly the same team, in exactly the same situation, Peyton Manning assumed the fetal position whereas Tom Brady grabbed the bear by its chin hairs and shiv'ved it between the ribs.

Again this winter, there is a big discussion going on whether there is such a thing as "clutch performance."  It continues to boggle Dr. D's mind that baseball sabes fight tooth-and-nail to insist that no such thing exists.  Some of them acknowledge it in the NBA and NFL, but believe it disappears when we're talking about sports involving 4 bases.

At BJOL they are beginning to (grudgingly) acknowledge that some baseball players try too hard in the clutch, so the "clutch" players are those who don't decline under pressure.

First of all, that is an inherently sour way to view the world:  we'll blame the failed people, but won't credit the successful ones.  But second of all, if it were true, that would only be a type of clutch performance:  extreme pressure doesn't affect you.

GEN George Washington's career is worthy of careful study.  When his commanding officer Edward Braddock led his forces into a massacre in 1755, Braddock being gunned down by Native American ambushers in a terrifying forest, young 23-year-old Colonel Washington rallied the troops and saved many of them.  Two horses were shot out from under him.  He received four (4) bullet holes in his coat.  GEN Washington's hat was shot off.

We would be flying a British flag if not for George Washington.  Questioned constantly by Congress for his strategic retreats and rallies, he quietly argued his career to them.  "I shall not be deprived of a comfort, in the worst event, if I retain a consciousness of having acted in my best judgment."

If I'm killed, if we all become slaves, I will die content, provided I've been true to myself and fought manfully.

He later wrote to his brother, "I heard the bullets whistling, and believe me, there is something charming in the sound."  Friend, have you ever been on a rifle range when somebody accidentally fired in your direction, twenty yards to your left?  I have.  You wouldn't like it.

But George Washington heard how many bullets whistle right by him?  He demonstrably enjoyed being in the middle of a firefight.  It is a real shame that the NEA wishes to downplay the heroism of the Founding Fathers.  Truth is stranger than fiction.

Sports isn't war, of course, but men are men.

The real key to "the zone," which continues to be lost on sabes, is ENJOYMENT.  This has been demonstrated by scientists.  This is not Dr. D's opinion, nor his preference.  It's the key to the idea of hyperfocus.  The clutch performer is the one who enjoys playing for the highest stakes possible.  You'll recall Michael Jordan's gambling problems.

Peyton Manning (it seems to me) relishes an unfair fight, one in which he has the advantage, one in which he can display his training routinely, and then accept the adoration of the minions in the stands.  Tom Brady relishes a hot fight, against the toughest opponent possible, with the stakes as high as possible.

In this personality characteristic, his fearlessness in the face of a terrifying foe, even his enjoyment of a war that he could easily lose, Tom Brady is heir to the Founding Fathers.  He's heir to the strongest version of America, the one that took down Hitler.  He waged war against, and took down, the ultimate enemy.  Brady is a quintessential American, one of whom we can all be proud.

And he can throw a football a little bit, too.