Skip to main content
"Moshing" off of Sullivan
How is Trevor Plouffe so Lame??

This won't be a long thread. I get to make "money" off of Jeff Sullivan, who is awesome at stuff like this and did all of my work for me.

But I thought the good Doctor might appreciate reading the original piece and my befuddled "huhhhh???" reaction.

So here's the initial piece, discussing just who Mitch Haniger is similar to so far in about 50 games:

http://www.fangraphs.com/blogs/mitch-hanigers-six-great-comps-and-one-bo... (I'd hyperlink it, but the link button is grayed out and I don't understand why)

Just trust me, this is a fun one. Copy it into the address bar and enjoy.

1) Mitch Haniger is most similar to Bryce Harper, Paul Goldschmidt, Edwin Encarnacion, Jose Bautista, Manny Machado, Mark Teixeira... (WOW...and all of these guys except Machado are minus speed (most are also minus fielders)

How is that even possible that a hitter could be the same as seven MVP candidates (including Haniger as one because he's muh boy!) in all of the ways that statistically matter and over a long career...and be so...lame.

So while we wait for the Maniger to heal up, I decided to try to figure out why I can throw out Plouffe as a comp *angelic grin*

That's almost everything that could encapsulate a hitter's make-up and control his results at the plate. I had a few thoughts as to how it is even remotely possible that Plouffe could have the same core metrics as Encarnacion or Harper or Bautista and yet be a below average hitter and I checked them all.

Is he more pull happy than those guys...less pull happy? Does he get most of his high-velocity hits on the ground? The surface indicators show nothing that would explain the difference.

It turns out there are several pieces of the hitting template that Sullivan missed and that should probably be studied further generally as a means of sharpening our player similarity systems.

This difference sounds small, but it's enormous over that many PAs. It says Plouffe may not swing at balls any more than Encar, but Encar is swinging at better strikes to hit, and is probably better at fouling off tough pitches when he has to protect the plate.

The means are almost identical, but Encar is getting more velo out of his flies than Plouffe and hard hit grounders more commonly turn into outs than hard hit flies.

3) Look beyond pull% to pull% on grounders vs. pull% on flies 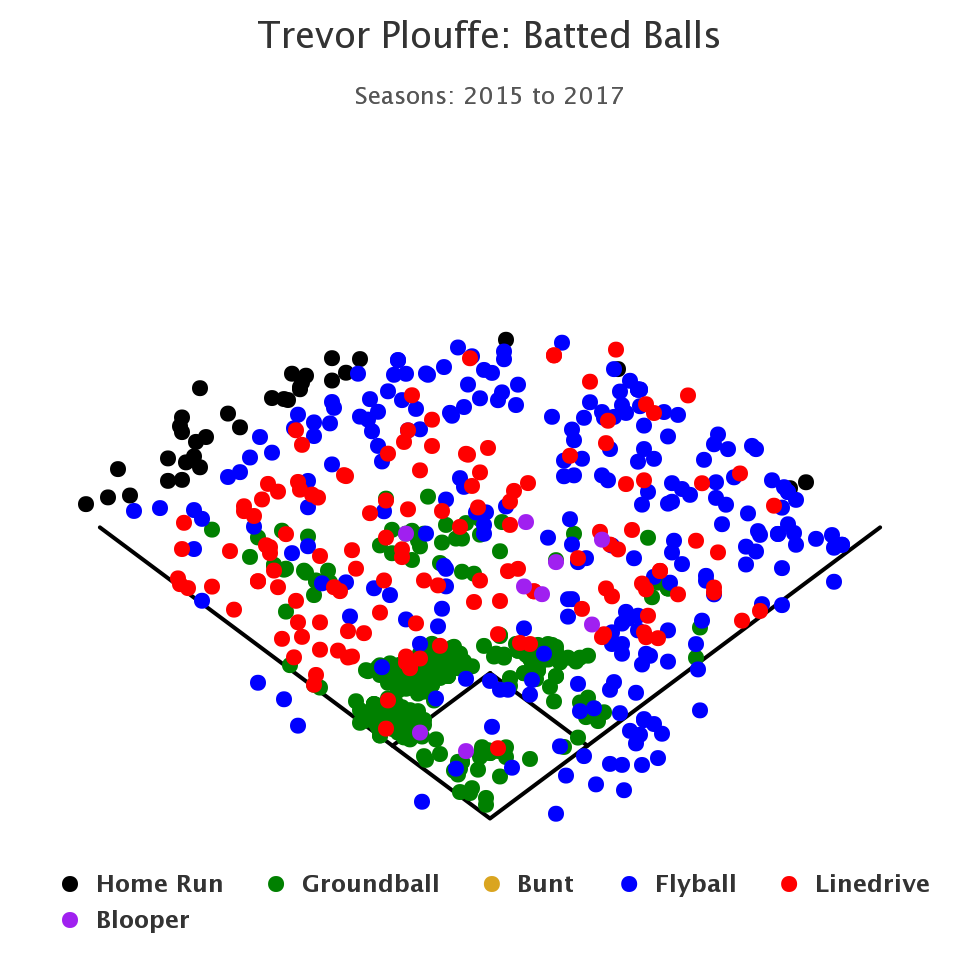 This is less than ideal 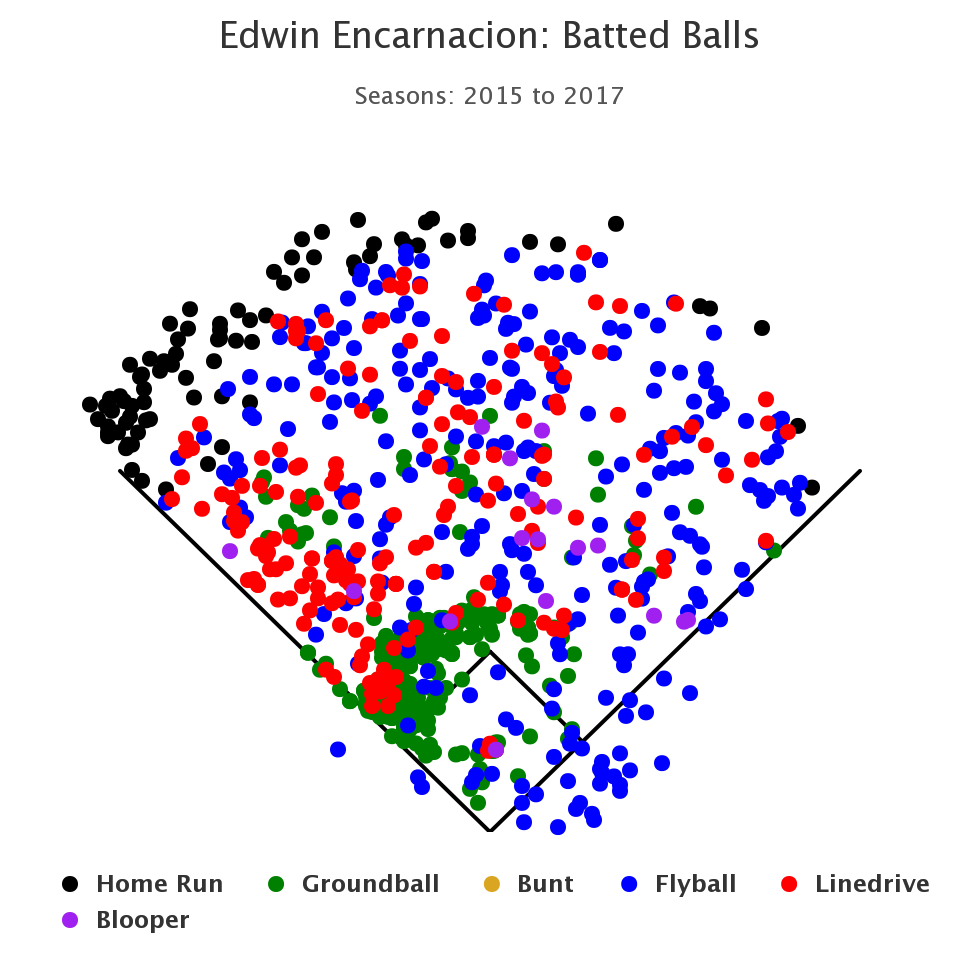 The difference here couldn't be more apparent. Plouffe is hitting too many of his flies to the opposite field and pulling most of his grounders and liners. You won't hit for as much power that way and your BABIP will be much lower. Encar has a few more flies on the off-field side than the pull side, but the difference is less and he's bunching his liners down on the left field side.

To sum up...Encar grinds an at bat somewhat better than Plouffe, and he is better at getting a cripple pitch and yanking it to the pull side in the air than Plouffe.

So where is Mitch Haniger on this?

Velo in the air vs. the ground: 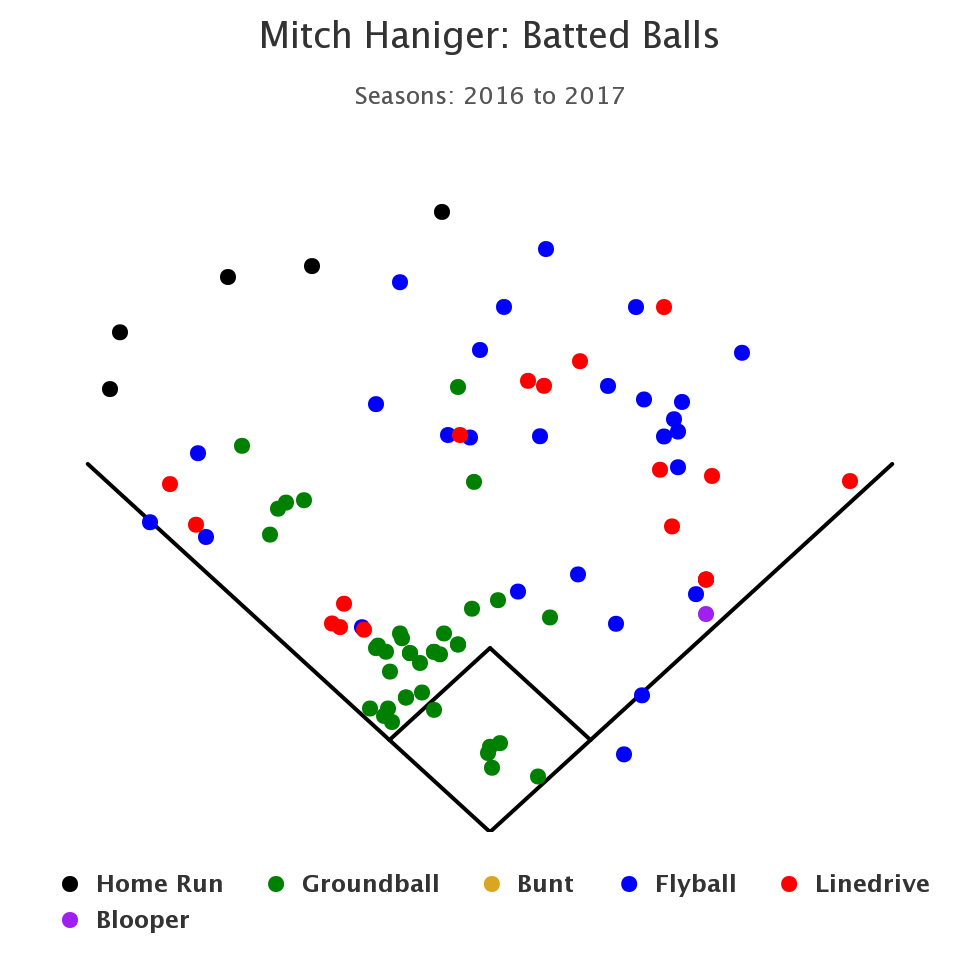 Too soon to tell?

Perhaps it's too soon to judge, but it looks a bit more Plouffian than Encarish.

No two batters are alike, but I think if we start including stats like the ones I've outlined along with things like SwStr%...I think our comps will get better. I am fairly confident that Haniger is no Plouffe and that he should get taken off the list.

But thanks Sully...I haven't gotten to flex my stat nerd muscles much lately and that encouraged me to research.

I see in the Plouffe/ Encarnacion spray charts is in liners pulled between 3b/SS and into shallow LF.  They both have green blobs on the left side, Edwins is covered by big red blobs though.  Well, the most obvious difference is in the Plouffe lack of black.

Too soon to tell for Haniger I think.

I do think that Encar is pulling more flies than Plouffe, but the LD spray is VERY different.

Haniger has 9 LDs to RF, 6 more that are pulled and 1 other dead up the middle.  That is more right field oriented on LD's that either Encarnacion or Plouffe.  But 4 of Haniger's homers are pulls, one other just to the pull side of CF.  Thinking about it, that isn't a bad system: Line the pitches away to RF and cream the stuff middle and in.

I'm not convinced that Haniger is Encarnacion or Machado, over the long haul.  But he's better than Plouffe.

And Motter not looking far behind! Couple moves that earn Dipoto a pass for some of the millions of dollars guys he's brought in.

Felt good to break out the analytical hat again..I don't generally have the time anymore, but this is a big part of why I love the game. The mission of discovery, as it were.

Thanks for the props...lessee what the good Doc thinks. :D

Looking around...it looks like Cruz is #1 in average exit velocity since statcast began and #2 in flyball exit velocity?

If Plouffe is the floor

I've always had a soft spot for drafting Plouffe in a 20-team fantasy league I belong to. He puts up sneaky production and can generally be found pretty late in the draft.

If Trevor Plouffe is the floor, Haniger's still a league average bat who can play CF in a pinch.

I just don't think Plouffe is the floor. :D

But you are correct...Plouffe is a slightly below average hitter whose main problem is failing to get on base. If Haniger is even Plouffe plus a few more walks, plus speed, plus outstanding outfield D and CF capability...that's still a 3 WAR player minimum.

I admit not doing my research before asking this question, but in what format does the batted ball data come from, and how do you plot it? Is it stored as X,Y coordinates with a Z value for outcome?

I ask because I think there is an opportunity to describe what is going on in the batted ball data that uses more than visual interpretation. Overlplotting, weights (outcomes) that are more luck than skill, and color-impacted cluster identification are probably diminishing the conclusions we can get from those plots. If it has X, Y and some Z, then I'd love to help you interface with spatial stats to look at that data quantitatively.

The plots are just a quick little glance. What is needed is an overlay of hit probability based on the trajectory data with the result marked, at the very least.  But the data itself comes in the form of fielded spot (which is why you see ground ball singles usually marked in the outfield) for grounders and landing spot for flies/liners. And then descriptive info...the result of it, the type of batted ball it was, the hangtime, the trajectory data from contact, etc. And then you can attach things like StatCast fielder info to judge defenses.

The last couple years but I haven't hunted it down yet.  I've seen entire 3d trajectories but I'm not even sure if that is available to us.

I saw those just starting to come out...

...while with the Yankees...they were using TrackMan (the software platform that runs StatCast) a couple of years before it went live.  It recorded RPMs on pitches and contact, the full three-D position arc of any batted ball, etc.

But I don't think the fans will get ahold of that data in full without a lot of hacking, at least not for a while

It's what we're talking about needing.  Not that we could ever even compare to guys like Gwynn, Griffey or prime Ichiro, Pujols and such because there will never be data.  1st plan for time machines, implement electricity, lighting, computers and setup for Statcast for parks around 1900.

It would be interesting to see those plots against Paxton and other pitchers to get a better idea of how certain pitches are hit.

But yeah...I wish we had even PBP data all the way back, and we get it pretty far back now...much further than I thought possible (1932!), but the statcast data will give us context going forward...which...I'll take what I can get. :D

Mine would be the original Johnson

And bring a gun to see how fast Walter was.

Yeah, collecting PBP was a long process that I respect all the people who worked so hard to combine old score cards and such.  There's still games missing here and there but it's remarkably close to complete even further back.

It would be awesome to see how the old greats stack agains the new greats.  You're lucky if you get a 24 fps black and white reel of one of Johnson's pitches.  As stat cast is part of the baseball fabric going forward, baseball will always have pages missing from the complete annals from 1800 to 2005.  At least we get to see Johnson's funky side arm wind up.