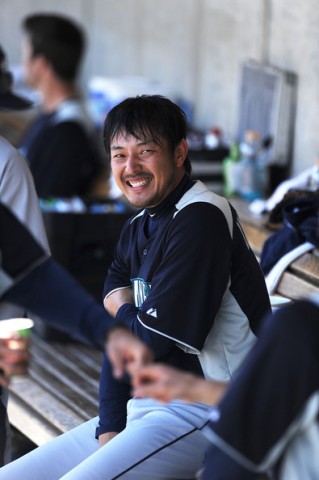 Jason Churchill has a real sharp article rat cheer.  In it, he accuses Taylor of a "hitchy swing."  He's right.

Batters who have an inside-out swing, you don't expect them to load too much, but ... it's not impossible.  And even if you can't see a hand bob up-and-down, that doesn't mean his muscles aren't imperceptibly moving that way, in an aiki "moving without motion" sense.  The irony is, this (if true, which it probably is) represents good news for Chris Taylor, since he would have lots of room to get crisper to the zone.

As Jason also points out, Taylor in 2014 already outhit the average American League shortstop.  He has also leveled "power-hitter level strikeouts" at his own statline ... which could in theory be due to his experience, or could be due to the fact that he needs to get shorter to the ball.  In either case, I'll take Chris Taylor in my talent pyramid.  Any Old Time, b'wana.

Tyler Carmont turns to the left hand with this opinion that the M's could probably do better, and so should avoid 1 year, $10M.  (?!)  To say nothing of what that would imply about a 1/$15M qualifying offer.  But Shannon Drayer turns off to the right hand and has a delightful article here, and in it she relays the org opinion that their re-signing Iwakuma "is when, not if."

Slap me silly, we can only hope.  In SSI's world, the qualifying offer is a given, and a steep hometown discount would look like 3/$40M.  If Iwakuma hits the market, there's no telling what the top two evaluations would be.  His c-a-r-e-e-r xFIP is 3.25, exactly the same as David Price's and Madison Bumgarner's.  Let's not even bring up the fact that 20% of those career innings, Iwakuma-san has been out of rhythm -- pitching out of the 'pen, or regaining his form, or whatever.

Hisashi Iwakuma, when healthy, is a Grade A starter.  It's a subject that should not be confusing, but it is.  The reason it's confusing, is that people lean their faces too close to the stats page.

WBC-san is a regional treasure.  I'm looking at him and Ichiro for the Mariners Hall of Fame.  Call it the Goodwill Wing if you must.  There have been few Mariners that deserved the uniform more, going all the way back to when he responded so graciously to their first misinterpretation of him.

And that, by the way, is more important to the Mariners than to any MLB franchise.   The intersection of performance and fan goodwill.  But that's not to say Iwakuma isn't an Opening Day starter, because he is.

He ain't the first lefthander to ever get wasted in Fenway Park.  He threw 45 strikes and 19 balls, just like they demand he do, and the Red Sox turned around about 10 of those strikes.  You can't have it both ways:  if you're going to forbid walks from rookies, then you're going to see crunchballs.

They will ALWAYS tell you that an extra-base hit was a mistake, every. single. time.  But the homer in the first to Castillo, just to throw out a f'r instance ... 1 curve IN.  2 Change DOWN.  3 Fastball on the BLACK, RIGHT! on the edge, and set up in sequence neatly -- Castillo went out and got it, hit it over the fence.  Boy, when you throw the ball over the plate isn't that what the umpires call a "strike"?  Isn't there such a thing as a major league hitter, hitting major league?

Monty's got some growing pains, but he remains an intriguing young lefty.  Gotta smooth out the decel, that's for sure.

Now, suddenly, at this time and place, in this context, over this temporal coordinate...

... when it no longer matters, he's back to looking like a 3+ WAR center fielder.  It won't surprise an inch if he gets four, next year in the National League.  And that'll be fine with me; turn the page and go to Brad Miller or Ketel Marte or Jesus Montero for all I care any more.

Do you QO him?  I'd hate to see him take it, but like Matty says you can probably be 97% confident that he will not.

I absolutely QO him. No question.

You absolutely QO him.

When your worst case scenario is an above replacement level centerfielder on a very tradeable 1 year deal - you are talking all risk and no reward.

Worrying about him accepting is the offer is losing the forrest for the tree. Nobody has ever accepted a QO, and the first to accept certainly won't be a 28 year old Scott Boras client coming of a 2.5 WAR season. Much more likely that he'll do a Kendrys Morales or Stephen Drew and sit out till June than accept the QO.

Didn't realize that Jackson is a Boras client

For your ROI on this "wager," you've got .97 times a comp pick coming IN, against .03 times the "overpay margin" on Jackson going OUT.  The "overpay" fee is pretty negligible.  The bet is lopsided by an order of magnitude (10x) or two.

Time for Mather to prove he wants to be a winner

The M's HAVE to give him a QO. This organization just can not afford to throw away talent now-a-days without getting something back. Despite what Nelson is doing, I highly doubt hitters will all of a sudden want to come to Seattle.

Further, do we really want to keep making the same mistake over and over again? I mean how many times are we going to trust and give a starting position to an unproven player?

While I am not excited about having Jackson back, there are worse things than having league average hitter and above average fielder in CF...even if you have to platoon for him 30+ games a year.