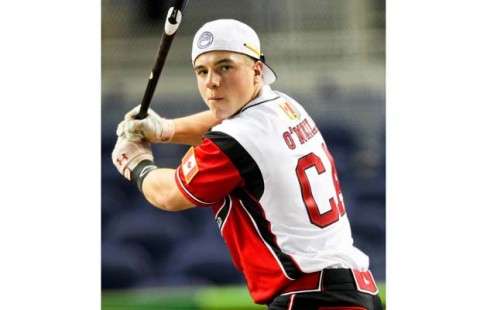 Gutsy call, putting O'Neill first.  Good on yer, selling long on yer own judgment rather than re-boxing the consensus for us.

Here is a site that lists historic California League stats.  Other 19-22 year-olds who slugged .500-and-plenty with ghastly EYE ratios there:

You can click around yerself for a while and let me know.  At a first go-round it doesn't look to me like a whole lot of 19-year-olds had Cali League slugging averages of .566.  So, that's kewl.  On the other hand, few of the above players had EYE ratios as bad as O'Neill did.  You've got a young air conditioner here with special PWR talent and a fair number of days on which he was overmatched.

Here's a vid of O'Neill's batting practice.  Indeed the dude has got Popeye forearms and a quiet lower body.  And here's his 28th homer last year.  Have to grant Jason's assertion that it starts with his hands, wrists and forearms.

O'Neill slugged .733 in 30 AB's at the Arizona Fall League.  No matter what they tell ya, that's better than slugging .161 with 0 walks and 12 whiffs like some a' those guys did.  When DiPoto speaks of buy-in on plate discipline, Tyler O'Neill's name has to go top of the list.  He goes first, and the other minor leaguers' names, behind his.  Remind us to check O'Neill's EYE at midseason, wouldja.

The funny thing is that he's so short to the ball so he SHOULD be able to survive by taking a long look at the pitch.  It would be interesting to know if his    K-rate was fueled by wild swipes at every kind of pitch, or if he mostly whiffed at the bendy stuff.

I will admit that I almost completely discount Slugging stats in the Cal League.  But he also hit 13 homeruns in Clinton in 57 '14 games.  There he was a true 19 year old (as he was 20 for much of the summer in HD).

That is a pretty impressive homer video.  Short and easy and "Boom!"

I'm not crazy about the floppy bat waggle load. How many guys have been successful with something like that? (Other than Vlad).

I'm with you did,

I don't like that kind of waggle as part of an actual swing.  But I think our kid uses it more as a pre-swing thing, sometimes WAY before the swing, than as part of the actual cut.  He certainly does that in the homer video and in many of the BP swings he doesn't use it at all.

In this clip from HS it was a major part of his actual cut, he started the bat from the waggled position.  https://www.youtube.com/watch?v=MT0jNxLVot0

It looks (to me) like he's reduced the waggle and uses it more as a pre-swing key now.

It looks like his upper body is moving as the pitch is being delivered. That's got to have an impact on his EYE, wouldn't you think?