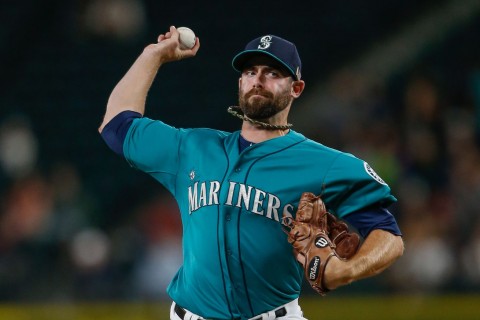 In the Karns vs Paxton thread, Billy Zoom pulls back the hammers on his side-by-side shotgun and blows Paxton off at the ankles.  Heh!  Good on him.  We'll just link you to his comment without feeling any need to rebut.

Other than to say, if Billy is absolutely right about everything with Paxton, then still (1) yes.  He is an unfinished product.  Your point being?  (2) As an embryonic lefty who fights his control, Paxton has BEEN perhaps a little better than your garden-variety Anthony Vasquez. He's got 30 starts with a 7.5 strikeout ratio, a skimpy 0.7 homer rate and a 3.16 career ERA.  He has won 12 games and lost 8 (a .600 record) for a team that has been slightly below .600.

Billy's always- interesting position aside, it is (globally) a funny thing how COMPELLING are the sights of spring training.  Nobody REALLY flies by their instruments; the covers come down over the cockpit windows and they start relying on their sheer vertigo.  Scott Servais and Dave Valle and Mike Blowers and EVERYbody talk about:

Honestly, if there are 300 people here, then Dr. D is #300 on the list, absolutely #300, as to his worry index on James Paxton.  Or any mega-talent who has bad mid-March stats, such as Nelson Cruz.  But speaking as pals here, it is SOOOOooooo hard to resist the sight of a player's last outing, isn't it?

DiPoto sez it's Cishek, Benoit and Zych and then "roll the dice."  Question for you.  Which of those first three are NOT dice rolls?

Dr. D is not panickin'.  He's just amused at the idea "we've got Steve Cishek but then we're gambling after that."  :: chuckles heartily ::  But!  The cool takeaway is that Tony Zych will benefit from a real application of "we go by track records, not by March."  Power to you, buddy.

Friday, the KKKKarnivore feasted on several "lockup" strikeouts on 3-2 curveballs.  When a pitcher :: coughcliffleecough:: has that much faith in his yakker, it makes the hitter's life SO much more complicated.  I love, love, LOVE watching a pitcher crack off a 3-2 slow curve.  LOVE IT!

And that's a starter's pitch, by the way, the full-count curve ball.  Not declaring victory on "Karns 5SP."  Just chatting.

There is a lot of talk this March, at BJOL and at Fangraphs.  "How much can you tell from spring training performance?"  Dr. D could link you up to all the articles, but most of you wouldn't click them.  You trust Dr. D's exec sums ... as well you should.  So, the state of the art on Spring Training correlations:

This makes sense.  If a player just leaped a plateau and can now hit 40 homers a year, he'll probably reflect that in March as well as he will in June.

Stats aside, there are some players who have turned heads for us a little bit.  Luis Sardinas, Boog Powell, Stefen Romero, maybe Shawn O'Malley have us thinkin'.  Did you know Dae-Ho Lee is hitting .285/.350/.500 in his first week's worth (24 AB's)?  He must be playing in SS games?  I still think that Dae-Ho Lee should make the 25-man and indeed start Opening Day against Cole Hamels.  Keep Romero in your hip pocket.  If Romero really is Jermaine Dye now, he'll still be that in May or June.

On the mound, Dr. D has thoroughly enjoyed Taijuan's offspeed game.  Joel Peralta is fighting hammer-and-tongs for one more season in the sun.

I would prefer we give him the ball. Could live with the pen.

Yes it is mid March... and most of us are just pissed we didn't pick Gonzaga. I mean, we all knew better.

Now that the bracket is ruined though, time to get back to Servais's and John Q's biggest worry.... the M's bullpen.

I fully agree with you Doc, that Cishek, Benoit and Zych..as well as Nuno and Montgomery are rolls of the dice as well as everyone else trying to find their way into this bullpen. HOWEVER, those 5 guys are going to be there. Servais and Dipoto are depending on those 5 guys to carry this bullpen. If anyone of those 5 guys sucks the rest of the way in Spring training, and blows every game... chances are still good that they are on the team. Remember that history matters.

Thus, then we are looking for 2 guys for this bullpen. It would be nice if these 2 pitchers were perfect for the last 3 weeks of Spring training, but that human nature thing pops up again. The guys who are in the running for these last 2 spots are:

Paxton - But we have 2 other lefties in pen... Servais has said a few times he wants two and only two lefties in the pen. Further, there are other lefties out pitching Paxton right now. Do you realize that Rollins has not walked anyone this spring? Yes it's only 7 innings, but wildman ROLLINS given up 5 hits and ZERO walks. But history matters. Or if you really want to talk crazy, they could go with Horstman. Do you realize he has never given up an earned run while he has worn a uniform in the M's farm system? Yeah he has been injured each and every year since he was drafted but... he is PERFECT.

Karns - Just in case Paxton makes the rotation, and we want our best 12 pitchers in Seattle. Again, there are players doing better than Karns though, who have a history of being in the bullpen - Like journeyman Blake Parker. 5 innings 2 hits 1 W done one inning at a time in 5 games. Or as you mentioned Peralta... or other than one bad outing Weiland or Sampson or Martin.

My point is... there are options other than Paxton or Karns. And yes Paxton and Karns are true talents with devastating stuff. And yes it is a shame that they both can not make the rotation. And yes it might make Dipoto or the M's look bad if one of these guys starts in Tacoma... but it is not the end of the world if that happens.

I know that Dipoto brought in all these guys / pitchers / scrubs with experience of failure at the MLB level that he likes for one reason or another but...

Why is there no rookie getting multiple innings to see if he can make the squad?

Altavilla, Moore, Morales and Pagan have all not given up an earned run this spring. Yeah I know they all only pitched 1 inning... but why only one inning?

The farm has some guys who are being bred as relievers - like Pagan and Altavilla. Why not at least get these guys get their blood pumping at the chance that they may make the team???