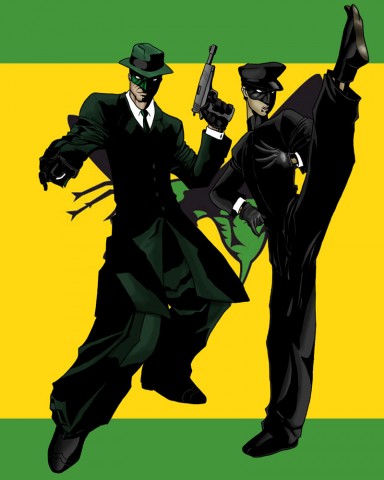 ... according to KATOH, that is.  I hadn't paid much attention to this Fangraphs system, but Grant Bronsdon of Lookout Landing does a nice job of 'splaining it succinctly.  We'll succinct his succintity:

It's kind of like PECOTA for minor leaguers.  Well, okay.  Now that I know that, I care about the fact that last July's KATOH list had six Mariners on it:

So, obviously, nobody else pays attention to KATOH either.  None of them guys* are on anybody's top 100 prospects list.  I smell Moneyball tactics!  Actually Jerry Dipoto seems to smell market inefficiency here, because he traded for 5 of those guys just last year.  I guess Jerry always admired the Green Hornet's ability to deploy a secret weapon and then take all the bows for him.  :: hands tied behind back as sidekick tears through hapless enemies :: Good job Kato!  Good job!  Get 'em!

Position Scarcity.  Dipoto acquired all 4 of his KATOH hotshots in LF, RF and 1B.  This is 1990's-era rotisserie strategy:  get Robinson Cano at second base, Kyle Seager at third base, and then throw yourself bellyflopped into the plastic ball pit of non-glove players.

TANK.  Interesting that he, and Mitch Haniger for that matter, were sky-high on KATOH's list even before their late 2016 exploits.

Three to make one.  Only one out of the group Haniger - Powell - Gamel needs to become a good ML regular, and they're all glam prospects in saberdweebs' eyes.  Known as the anti-Smoak strategem.  Also known as a Best Case Scenario.  ... if I were a GM and I ever made this happen one time, three ML-ready players I was high on, competing for one slot, I'd call my career a win.

This is the most fascinating

This is the most fascinating M's team entering spring training since 2012. Back then I though we were assembling a can't miss group of young MOTO hitters (Smoak, Ackley, Seager, Montero), we still had Ichiro, and we had assembled a cast of role players ready to take the hill by storm (Michael Saunder, John Jaso, Mike Carp, Casper Wells). So I thought, anyway.

Of course our, excuse me, their core now is veteran and proven.

Interesting rankings:  Of course, Gary Sanchez was ranked #41 before he clubbed 20 MLB homers in about a week and a half.

Ditto, Dansby Swanson, before he hit .302 in the bigs.

But it illustrates that the MiLB numbers suggest that O'Neill and Haniger are high ceiling guys.

The White Sox drooled over Moncada, getting him in the Sale deal, yet he's rated at the same level as Haniger and O'Neill.

Vogs and Gamel were rated above Aaron Judge, and The Big Apple is expecting big-time bashing from him.  Sometimes it is easy to forget that, warts and all, the young guys you have still look pretty dang good to other folks.

And Vogs/Gamel don't look to be sliced liver, either.

Is KATOH infallable?  Surely not.

But we have 4 bats and and a Booger that it quite likes.  A couple of them, or more, will bear fruit.