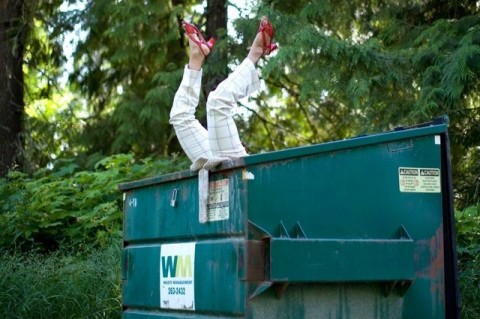 Keith-O gave us a rundown of young, ML-ready center fielders that we fans might keep our longing eyes on.  He said Dalton Pompey was the pick of his litter:

This is a guy to try to get. He's a switch hitter without much split difference who has a bit of tater pop.

Baseball-America had him as the #30 prospect pre '15.  Nothing he did this year would scar that.

What does Toronto need?  The interesting nexus here is that the Blue Jays also have Pillar and Revere on the big league roster.  Pillar has had a tremendous defensive year and Revere (now playing LF) has been serviceable for years in CF.  You would have to trade something pretty for Pompey, but you might be able to make it happen.  ... - See more at: http://seattlesportsinsider.com/blogs/available-prom-dates#sthash.5Py6dl...

A quick surf 'round the net shows Jays fans wondering about where Pompey would fit into the Jays' OF the next couple of years.  His audition as a 22-year-old Opening Day center fielder seemed to produce a bit of shellshock, as a few ugly Pompey AB's seemed to turn themselves into a few ugly Pompey defensive lapses.  Or so the word is.  Now everybody's talking about easing him in more slowly.

That doesn't mean too much to Dr. D; if the Jays have gotten his first couple of stumbles out of the way, great.

BaseballHQ had him as their #14 outfield prospect going into 2015.  They said, before the season started:

HQ gives him 4/4 stars for speed, 3/4 stars for power even, and then 4/4 stars for contact and batting average.  So, pretty much what you're looking for in a young ML-ready center fielder, if you want to "get athletic" without sacrificing the strike zone.  The rap on him would be that he's not a Brad Miller-esque shot at The Great White Whale 5-WAR youngster, but if his "high floor" leads to 2+ WAR, then that solves the problemo.

Fangraphs said in March that Pompey's performance in AA/AAA and the Florida State League --- > looked good but not great, and this is the kind of young player for whom you project a "muted" major league line.  Theirs was .235/.290/.350 if he played 150 games in Toronto, and that's right where he wound up (adjusting BABIP a bit).

You know who would be better than any of the center fielders that Moe listed?  Ketel Marte.  We'd be thrilled if a Dalton Pompey came in and hit a Safeco .280/.350/.405 -- in fact, to deal for a rookie CF who did that well in his 2015 audition, you might have to give up Taijuan or K-Pax.  So we climb back over the edge, after our dumpster dive, and find Mo' Dawg's Ketel Marte idea sitting there all along.

At this point, I'm really warming to the idea of Marte CF, Miller LF, and Journeyman SS + Chris Taylor in the infield.  You give nothing up in trade, you keep your salary powder dry for other slots, and you don't waste / give up on a young ML-ready shortstop with a 2+ WAR projection.  Wonder if DiPoto will give this any consideration.

I always liked this idead a lot.  It solves a bunch of problems, too.  MIller and Taylor have both been decent MLB SS's, in case anybody forgot.

The Mariners need, above all,

The Mariners need, above all, a couple of OBP guys to hit in front of Cano, Cruz and Seager (which should be the 3-4-5 batting order if Cano can, ahem, overcome the I-can't-hit-batting-third syndrom that plagued him this year. If you look at those three's RBI totals they are shy of 95-110-90 RBI's as a direct result of the lack of top of the order OBP.

I LOVE seeing Marte at shortstop so far, and I'd hate to disrupt the immediately obvious chemistry with Cano. With Marte you get a sense of COMMAND of the position. Every move of his shouts, "I got this." (This by the way is a trait that Cano has in spades.) Taylor has the skills but not the command. Miller has the athleticism but not the skills and definitely not the command.

I get that Marte to CF looks to solve the CF problem, and that position scarcity makes this position hard to fill, but why move him off the position he already looks able to lock down? And if he indeed continues what he started late this season, he could be one of the two top of the order OBP guys. Taylor would be perfectly suitable as your bench SS. Then you prioritize a .330-.340 OBP CF'er. Honestly, if the M's can do whatever it takes to get that piece, and if Marte doesn't fall prey to Mariner-player-development-disease, they can make do at 1B and then they are left with what in the world to do at catcher (leaving pitching aside for the moment). They would have an offense. Two OBP guys in front of the Big Three amplifies the value of the Big Three. It's the classic force multiplier.

Miller in CF to me has the same problem as he has at SS, the needed athleticism, he can develop the skills, but my gut tells me he will never command the position. In fact, my gut tells me Miller should not be entrusted with an up-the-middle position for this very reason. Thus his value is more limited, because that makes him a corner OF'er.

Is sum, I get the logic behind the suggestions, but personally I believe the particulars in this case mitigate against them.

You crushed it.  Now my head is turning back at both ideas like watching a tennis match :- )

Re: DiPoto and Marte.

Re: DiPoto and Marte.

No doubt. You'd have to sit down and dig deep with your staff about whether to gamble on Marte at SS going into spring training and then react at that time if you start to have doubts, or to get a reliable veteran stopgap earlier this offseason as insurance. There would probably be slim pickings by the end of spring training and a starting shortstop wouldn't come cheap. And after the results of the last few seasons of gambling on a spring shootout between young, unproven players, it's clearly a big risk. Do you want to risk your season on it? Glad I'm a two-bit blog commenter and not the GM. But my goodness Marte made such  huge impression on me that I had to generate a defensive term new to me to describe it, command. Once I thought of it things clicked for me. "I belong. I got this. You can move on to other problems." That's what Marte's play both in the field and at the plate said to me. And I'm the skeptic about young Mariners players.

Clearly DiPoto has more at stake in that assessment than I do.

Also in total agreement with DaddyO

Marte has 'claimed' the SS job--even though he'll continue to make silly errors until he fully matures in the role.

What we have learned is that center field experiments (at least for us) don't seem to work--Ichiro, Ackley, Miller and many more I can't remember off the top of my head.  Can't see how Ketel would break that streak.

I don't know what we've really got to trade for a center fielder.

How about resigning Austin?

So...I don't think that'll work.  There are options...but DiPoto will have to get creative.

I like the idea of Marte in CF, but he's staying at SS.  At least if we don't make a managerial change.  McClendon has clearly shown that he believes the kid is our SS of the future.  There are CF options out there, as I pointed out.  Were I DiPoto, I would be all over Pompey and Jay as soon as the Jays and Cards end their seasons, which may be after the World Series.

marte has to do what to show he belongs at SS?

Hard to imagine a better (extended) audition than he has had. I felt for Miller when they called Marte up because I think he's been shuffled too much but Marte is clearly better at the position, and hit some, too. I keep him there. And while I'm not a huge Lloyd fan I think his call on Miller as a super ultility is perfect. I let Miller platoon with Guti in left, back up Martel at SS, Cano at 2b, Seager at 3b and trade Taylor for a relief arm.

Dipoto seems to like making trades - he's almost gleeful about it - so let him find a CF there or in free agency.

Miller is what then???

Has anyone actually heard Dipoto say that he wants a super sub? How many GM's actually value a super sub, more than starting left fielder?

I like Miller, but I doubt he has that valuable of a role here, especially based on the core people and the up & coming hot prospects.

I wonder if Toronto would trade Pompey for Miller... and who actually wins the trade if both ended up at 75% of their potential?

What makes Miller an

What makes Miller an interesting situation is that DiPoto included himi one time he listed players he thought were keepers.

3-4 a couple of nights ago, with a 2B and a BB.  1-1 last night with a 2B.  In doing a bit of snooping there is a bit of a problem here:  Bautista (age 34) and Encanacion (age 32) are both coming into their final contract year in '16, a $14M team option for Bautista and a $10M option for Encarnacion.  Assuming you sign them both at that discount rate, then you lose at least one of them the following year, likely both (their deals will,not be team friendly)  Figuing that it is Bautista, you would like to have a young, athletic, guy to plug into RF.  Revere-Pillar-Pompey would be pretty impressive roaming around out there.

Both Bautista and Encarnacion are 10-5 guys, so they have control over possible trades.

I'm betting the Jay's will be very reluctant to trade Pompey.  You would have to go real big.

I would certainly sniff it out.  But I think Jon Jay is the more available guy and the cost is likely less.

And as I think about it, Toronto would like young arms, I bet.  Is a Pompey worth a Paxton or Walker?

I think there's a LOT of options out there for CF

I think there's a LOT of options out there for CF, so I'm excited to see how Dipoto approaches this offseason. If we expand the list to guys with MLB experience, I'd talk to the Rays, Marlins, Mets, Yankees, and Padres in that order: