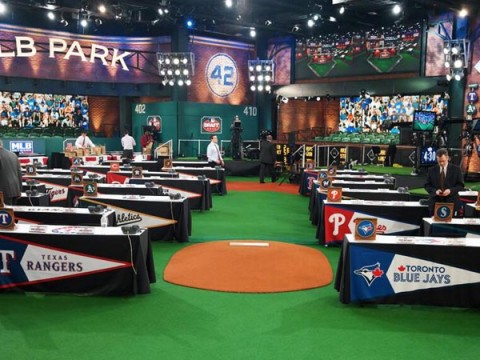 RockiesJeff sends updates to a few of us back-channel.  He certainly does not do it for the purpose of our re-posting it on SSI; Jeff has bigger fish to fry than a smidge of pub here.  But we also hope he doesn't mind if we copy-and-paste a bit of his own summary.

On March 17th, we posted "Juggernaut In Junior College" when Jeff's son went to 45:3 (!) on the control ratio after five starts.

Last weekend Jeremy had another 9 K's and Jeff provided a bit of a summary:

I had to give you a quick summary of game this last weekend. It was billed as a ‘marquee matchup’ as Jeremy (#4 nationally in Ks) was going against Seward’s left handed ace who is #1.

Our son in the Marines got home late the night before so all of us were actually able to make the drive to Kansas to watch. It was a bit surreal as behind home there were 5 scouts, I believe from the M’s, Yankees, Royals, Rangers and Giants.

Long story short not to bore you but, for a day, Jeremy was the dominate pitcher getting a complete game….5 hits, 9ks and I think 3 walks (funny as different box scores have 2 walks and 2 vs 3 earned runs). Anyway, he had good velocity hitting at least 94 that I saw.

Things can change so fast with these guys if you are not the 1st round stud, but will let you know the next steps....

Jeff was selling his son short, compared to Seward's recap of the game.  :- )  Here is Jeremy's stats page - he has 73 K and 13 BB with 5 HR in 52 innings pitched.  Your son, don't.  Here is a profile for him a couple of years ago when he entered JC; he said his goal was to get up to 96 and go to a 4-year school.  Nowadays he may be pointed more towards a direct route into the MLB draft?

The Rainiers opened their season Thursday night by beating the junior Rockies, 6-5.

Joe Wieland got the Opening Day nod over Paxton and Roach, LOL, and those three have been identified as equal* options as soon as the M's first rotation injury strikes.  You think DiPoto isn't pressing K-Pax a little bit?!  Wieland pitched mediocre, being as he's a mediocre pitcher.  4 innings, 0 strikeouts, 7 hits.  We're sure that Paxton realizes his fate is in his own hands .... until Roach goes into June with an 0.79 ERA, that is.

"Mariners B" combined for 9 hits and 6 walks against the Isotopes' #1 starter, a 94-MPH righty who has half of a cruddy season in the National League.  Like we sez, 90% of PCL innings are pitched by guys who either just came out of the majors, or who will shortly be in the majors.

Boog with two base hits and a walk.  Shawn O'Malley with a hit and 2 walks.  Stefen Romero with three hits including a double.  Chris Taylor with an 0-fer and an error.

Mike Zunino utterly failed to strike out.  Dan Robertson and Ed Lucas were in the starting lineup, providing a straight flush of Crash Davises thirty miles down the highway.  I'm not sure I've ever seen a AAA team configured quite so much toward providing a safety net for this year's major league team.

Not that SSI has anything against win-now agendas.  I'm ready to start talking about our July 31 blockbuster to rent Jose Bautista.

Edwin Diaz gets some love at the D-O-V Mainframe.

Has right arm. Will travel.

Holy schnikies!  I posted over on the D-O-V, but may as well do it here.....he's riding that right arm rocket right out of Jackson and into Tacoma (or beyond) in a hurry.   22 AA starts, counting last year.  He's not making it to 32.

Deej with 2 singles for his AA day.

Doc, betcha that Bautista rental starts with Tank O'Neill (he being the best blooming RH bomber we have)!!! And then we pile on goodies from there.

Not sure I like the Tacoma Wieland headgame start.  If that is what it was.  Looks like it, anyway.

Not taking the other side of that one Moe

Was the same thing I was thinking, was, what is he even doing in AA.  Answer probably is, get a bit of the warmer weather, have a coupla games' worth of success, then on up to AAA.

They talk about wanting him to hit both sides of the plate better, and to throw the change more consistently.  They've watched him more than we have, but that sounds a bit FKey7'ish to me.  Diaz' command is inferior to Paxton's or Montgomery's?

Either JD or Servais said earlier this week that Paxton was being slotted to pitch the same day as Karns in the big show, so that if Karns faltered for any reason Paxton would be on his natural start day if called up.

Yep, that would explain it

Which from my angle is amusing, though.  Their depth chart is what it is, no complaints, but ... I'd consider it a lot less likely for (1) Nate Karns to get run out of the league than (2) Some random injury to occur.

Diaz is rocketing into SP6 position

Paxton better get it together quick or he's gonna get lapped and end up in the bullpen. Even more impressive than the pitching line is that Ediwn did it against a Montgomery team with 3 Top 150 or so hitting prospects.

Thanks Jeff....the baseball grind is great but very real mentally working through the whole process. Long seasons ahead at every level. It is fun and a special time getting to watch your own son enjoy a taste of the success for all of the hard work he puts in daily....but can't take anything for granted. Your encouragement and kindness means a lot.

As usual, you all are right on with Diaz. A stud. 98! I can't even hit a golf ball 98! It is funny, I will have send Jeremy his stats as he is always on himself to put on weight (currently 6'5/200) while Diaz is listed at a mere 6'3"/165. I have to assume those are old/small numbers on Diaz. There is not a team in existence that has too much pitching. Love watching the younger ones work their way up!

If they're blue-chippers they most certainly are quick on fastballs.  Scouts don't rate young hitters unless they can turn around any fastball.

"Can't hit good velocity" is their favorite "dismissal" -- though plenty of major leaguers have to cheat on 96 MPH -- and a top rating always tells you *that* much about a batter.  So, obviously Diaz wasn't hucking the ball 96 down the middle.

Well said...the studs can hit the fastballs. That is the beauty of baseball that it isn't just fastballer stud against bat speed stud. Thus the room for the Andrew Moores who started the season with a great game. Obviously he did well in the Conference of Champions (sorry but when you are not on the west coast you tend to have greater appreciation for Walton) but I was surprised he went so fast in the draft. I hope he continues to develop his craft and shows up in Seattle!

"The only reason I have a career is because major league hitters don't want to have a fastball thrown by them."  :- )

Will enjoy following along from the sidelines. I can only imagine how much fun it is to watch your son excel at such a high level. We are having more than enough fun simply watching our own sons play pee-wee basketball and flag football the past year. Sending happy vibes and prayers your way for continued good health for your boy!

Those top Montgomery hitters Diaz faced are three different types. Casey Gillaspie is a hulking Mark Trumbo type dude. Willy Adames is the young projectable do it all SS prospect. Jake Bauers is my favorite of the three, great eye and only 19 in AA last season. Starting off again in AA at age 20 now. One of those pure hitters who lack the huge power potential, at least scouts think so. Looke like he can crush the ball when he gets a hold of one so power upside might be undersold at this point. Or he ends up as Mark Kotsay.

At any rate, Diaz was superb. Amazing to have both he and Paxton lurking to crack the rotation. What a fun this season is shaping up to be!

Thank you Blissedj for the kind words. Enjoy every minute of it. Lots of great memories on all kinds of fields and courts here with 5 of them. The pee wee days are a whole lot less stressful! LOL! I appreciate you taking the time to write!

And thanks for your comments and insights. Need to have to guys on the verge of breaking through like Diaz. I look forward to reading more from you!!!