Skip to main content
Mariners Prospect Talk
Jarred Kelenic is the next Junior ...
or so the prospectoids are tellin' us 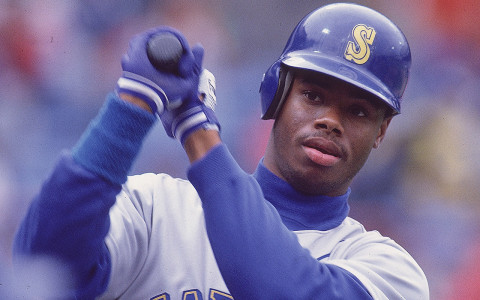 The Corner of Edgar and Dave has an excellent little article up, and an even better .gif of Kelenic swatting a pitch into the bleachers.  What was the pitch?  It was one thrown in his first game after promotion to high-A baseball. Quoting a few of their quotes,

“The general thought was, when he came into professional baseball — by third parties — is that it was effectively average-ish power,” Jerry Dipoto said, with a slight chuckle, on Ep. 051 of The Wheelhouse. “The power is significantlybetter than average. He can hit, he hits the ball hard, he has lift in his swing, he identifies pitches incredibly well.”

Looking at his swing, and at Dipoto's last attribute there, you've got to say he reminds you of Junior.  Griffey always had the ability to track good velocity against offspeed stuff, and when he first came up he had a much shorter swing, though even the young Griffey wasn't as compact to the zone as Kelenic shows in that .gif.

In fact, when he was 19-21, Junior was "only" homering 16-22 times a year; three years he buckled down to stay within himself, even to the point where people started wondering whether he ever would hit for power.  He was just making sure they didn't embarrass him.  At 22 he hit more homers and then at age 23 his power exploded, 45 homers, and didn't stop until karma bit him in Cincinnati .

The Corner of Edgar and Dave points out that 4 teenaged players have hit for OPS+ of 160 or better in the Sally League since 2006:

“We’ve literally never had a conversation about elite prospects because the Mariners haven’t had (any),” [ESPN MLB Insider Jeff] Passan said. “… It’s almost like you guys are getting the internet for the first time because you’re finally seeing what it’s like to have a top 20 prospect, and that’s what Jarred Kelenic is.”

Actually I had the internet when Jesus Montero was the #5 prospect in baseball, and at age 19 Montero was ripping high-minors AA baseball to shreds.  At 21, he was slugging .500 for the Yankees.  With Ackley and Zunino and Jose Cruz Jr. and a couple of others, the Mariners have had some pretty vaunted minor leaguers.  But we get what Passan is saying.  He's saying he thinks that Jarred Kelenic is a true Giancarlo Stanton-level minor leaguer.

So, if Kelenic actually is a Ken Griffey Junior-type of prospect, high-A is well within his ability and --- > so is AA.  We'll see whether all this big talk is worth doodly squat, Gramma.

For Edwin Diaz, who you've got to admit throws 1 inning every other night, the M's received