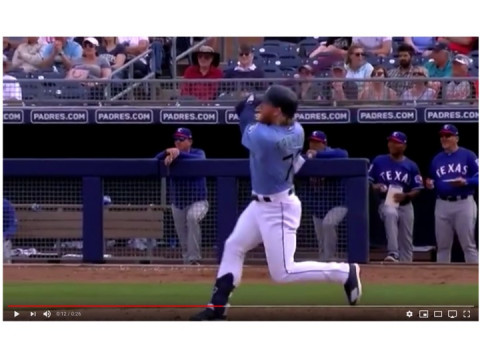 I'm really excited to see Jake Fraley in teal. Two more HRs today; five tools. As someone else suggested- I expect that trade (Zunino, Heredia, Plassmeyer) will be forever remembered as "The Fraley Trade".

Fraley had trouble staying healthy with the Rays, playing just 30 games in his first full season (2017) and 66 more in 2018, though some of his tools were on display during that shortened campaign. In his first year with the Mariners since coming over in the Mike Zunino trade, he’s put it all together in his first taste of Double-A with a .326/.393/.563 line to go along with 11 homers and 14 steals.

Here is a YouTube with a CF camera and a side shot of a Fraley homer.  He's got the Nick Franklin rubber band stretch between hands going backwards and foot going forwards, with lots of supination (bat angle at load) and outstanding explosiveness through the zone.  Nice quickness to the ball and controlled followthrough in balance.  NO worries about power with this lad, gentlemen.

This one is a Rays blog post about Fraley.  Bad:  it's written before 2018, when Fraley began lighting it up for realz.  Good:  it's a comprehensive and detailed op-ed.  They like Kevin Keirmaier as a comp, no big surprise since they were so high on his defense in CF:

The Baseball Draft Report had a scouting report right before, and after, he was drafted in 2016:

JR OF Jake Fraley is an outstanding prospect. I may have actually underrated him despite ranking him twentieth overall in the college class back in October. Here’s what was written then…

... it would be easy to overlook Fraley, a tooled-up center fielder with lightning in his wrists, an unusually balanced swing, and the patient approach of a future leadoff hitter. Do so at your own discretion.

Peers ranked over Fraley this year (according to me back in October) included names like Lewis, Reed, Ray, Boldt, and Reynolds. Banks, Wrenn, Quinn, Abreu, Brooks, and Dawson came next. I think if I had to do it again today with a few more months of research and thought under my belt, I would have Fraley behind only Lewis, Reed, and Ray, and in as close to a tie as humanly possible with Reynolds. He’s really good. In what is surely an unfair thing to say based on the sheer awesomeness of this guy’s numbers last year, I can see some opportunity for a Benintendi-like breakout for Fraley in 2016.

The Dynasty Guru has an opinion for us from just last week:

Fraley is older than I generally like to mention in the prospect highlights, but his performance so far certainly merits it.  Currently, Fraley leads all of Double-A in batting average, and he is doing it while hitting for power as well, sporting an OPS just under 1.000 on the season (.978).  His 2019 performance is also well-aligned with how he performed in High-A ball last year, which bodes well moving forward.

Will he end up being a .330+ hitter in the Major Leagues?  Unlikely.  But he may still end up being a significant boon to your fantasy team.  Not calculated in his already stellar wOBA projection is his 14 stolen bases, which comes on the heels of the 39 bags he stole in 2018. You’d be hard-pressed to find a better overall performer in the minor leagues right now than Jake Fraley.

The last we'd heard from the Mariners -- forgetting where it was -- was that Fraley could get to AAA before too long and if so, a September callup would be standard operating procedure for a 24-year-old like him.  You and I can root for something more aggressive than that.