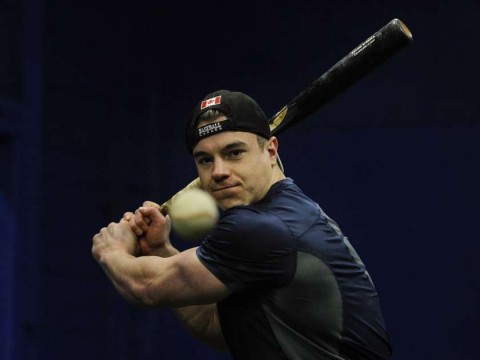 Well, maybe not quite interlocking :- ) but it's not clear to me how you get Babe Ruth style calluses on your palms if you're wrapping your little finger.  LOL.

In the Shout Box during the last Houston game, people asked for a summary of what DiPoto said.  That was one game I missed live on TV, but went back through the game on DVR in order to get DiPoto's half an inning of commentary.  Little did I realize that JeDi would open up the fire hydrant in the 2nd (?) and it was still gushing when I left off in the 4th or so.  Wow.

Six pages of handwritten chicken scratch and no idea how much more there is to come.  Ten subjects so far, of which this is no. 1 ... DiPoto's thoughts on Tyler O'Neill.  Thusly:

1) Sims asks about player development and DiPoto swooons about the year we had (which see upcoming post).  JeDi mentions that Tyler O'Neill was the Baseball America AA Player of the Year.

2) So Sims follows up, When you have a guy with a AA year like that, where is he next March?

3a) DiPoto notes, It's not yet required to put O'Neill on the 40-man roster, and it's not yet necessary to start the clock ticking on his ML service time.  Remarkable admission for a GM.  He explicitly states that is why O'Neill is not in the dugout now and implicitly states that's why they'll hold him in AAA for a bit, at least, next year.

4) "My favorite thing about him ... in the last few games he drew his 62nd walk.  Which equalled his career total before this year."  Had everything you wanted other than being able to identify a strike, and he did that.  Has lots of "controlling the zone" now.

5) Has power, athleticism, runs better than you'd think for a guy built like a fire hydrant and super strong.

Here is a Canadian paper that notes O'Neill's run at the league Triple Crown ... 1 in RBI, 2 in HR, 5 in AVG .. while being +3 years younger than the average league starter.

I'm not in the greatest position to comment on Tyler O'Neill's physical projection; for those who just joined us, Baseball America is all about that, field-level scouting.  They're on one end of the spectrum, opposite Baseball Prospectus' extreme stats-oriented approach on the other end.

However, we do remember arguing about Shin-Soo Choo hitting .310/.380/.480 or whatever in AA at 21, and looking up past AA leaderboards, and finding the stats leaders in AA absolutely packed with future stars who were comparable to Choo.  (Potential power to hit the ball over the Cheney CF backdrop, good OBP, strong throwing arm, etc.)

Mike Hargrove scoffed at Choo when Bill Bavasi wanted him in the lineup, and Bavasi was forced to trade Choo forthwith.  Choo at age 23 proceeded to hit ... hmmm ... .295/.373/.473 his first year in Cleveland.

It's not like O'Neill came out of nowhere; he was a high draft pick, third round.  The Mariners' prospect page has O'Neill second in the org to ... Kyle Lewis, who "did everything to his knee you can do to a knee."  Another post there, I guess... that is pretty blinkin' funny, a kid with 100 pro at-bats and a wrecked knee being more valuable than Tyler O'Neill, but Lewis was a top-50 prospect and DiPoto thinks he'll be fine.  :: shrug ::

Anyway, Tyler O'Neill goes into 2017 as an elite prospect, by definition and according to DiPoto's report.  Good on 'im.

Thanks for the list amigo ... anybody want to rank them?

... I take it you didn't rank them by order in your own view, in two groups?  Unless we need an Altavilla POTD from you, which probably we do ...

Would be interesting to see, though.  How various guys rank the U-25's in our org.

No subjectivity was implied!

But it would be interesting to see if we could come up with a consensus SSI top 10 under 25, or something like that.

Shout box is broken right now...saw a story on the Mariner website about Steve Clevinger supposedly saying offensive things on twitter about Black Lives Matter protests - anyone know what he actually said, because the article studiously avoids telling the readers and I have a strong inkling that what he said is only offensive if you're looking to be offended (as is usually the case in such matters).

This one actually appears to be a legitimate grievance - I've gotten a bit tired of the feather-trigger knee-jerk "BAD!!" reaction every time someone says something that some group might find offensive, but asking all involved to be locked away like animals is too far even for this cultural libertarian.  Not that I would advocate an overreaction.  This seems like something that could be treated with a bit of community outreach.

Yes, thanks for the link on Black Lives / Blue Lives

I agree with DiPoto that the 'language and tone' is a big problem.

Everybody in America ought to be careful about words that inflame emotions on the Black Lives / Blue Lives issue, as opposed to speaking respectfully about their points of view.  The people who agitate the problem with their words either don't know, or don't care, that it's about life and death now ... to say nothing of a 'tipping point' towards civil war or some manifestation thereof.

I wonder if Mojician has any comment on the relevance of 'inciting a riot' language in the year 2016 A.D.  Haven't heard of anybody charged with that since, oh, 1977.

Sigh.  We 'merkins are done gonna hang ourselves with our own tongues if we ain't careful.  Used to think the internet could be the salvation of the country; now am worried that social media will be its undoing ... :- 0

You know...I just read a fantastic article on the history of the notion that Ty Cobb was some sort of inhuman animal/monster with deep racist views and such - the piece made the case that, actually, his whole family was full of avowed abolitionists who'd been run out of town more than once because they supported ending slavery and desegregation, that he, himself favored the inclusion of black ballplayers at the major league level, and that his contemporaries didn't despise him the way the press has us believe they did today.  In fact, most of them had a deep respect for his aggressive style of play and there was no evidence that he ever tried to intentionally spike anyone.  The whole story started when one crooked, drunkard writer fabricated it to sell books.

I wonder what his legacy would look like if he had twitter.  I'm guessing, modern schoolchildren would compare him to Satan disfavorably.

Heh!  I've learned this much from years of reading Spectator, G-Moneyball and Doc:

Those who rip the Southern League limb from limb on their first try at a young 21-22 year old age in Brad Miller, Kyle Seager .3-.4-.5 style are decent major leaguers. The young AA rockstar is the traditional path to the bigs.  Guys who did this who didn't turn out: Jesus Montero .909 at AA Trenton at 19 years old!  Justin Smoak .930 at AA Frisco at age 22.  But, these guys are slllllloooooooowwww first base men but are both useful major leaguers, which is still the one percentile of professional players.  Both of them seem to have a failure to adapt.  Kyle Seager purposefully bulked up to his present state because he saw the downsides of warning track power.  (I read that in an interview somewhere).  Justin Smoak has never gotten any stronger, despite it being worth about $50 million bucks.  Jesus Montero just doesn't like baseball very much.  The exceptions prove the rule.

Even guys who have to repeat AA to have their big year, See Blash, Jabari, end up being major leaguers.

Of course, every baseball scout knows that the AA rockstar is the second hottest commodity in baseball (Behind the generational talent 18 year old types) The trick is predicting the next young AA rockstar before he does it.

Didn't know we had a guy like that.  O'Neil will be fun to look forward to.  Its super fun hearing that JeDi is being as precous about O'Neil's service time as if O'Neil was Byron Buxton.

Hadn't thought of it that way ... next best thing to #1-pick-in-draft teenagers ... hey, you amp'ed me up about my own shtick!  Does your bag of tricks have no bottom!

Have seen a few guys on TV who used it.  Beltre comes to mind....maybe not.  Not unheard of.   But Tank's looks to be more of an overlapping grip.  it looks as if his right pinky sits slightly on his left index finger...but not quite on top of it.  I wouldn't be surprised if it gives the sensation of greter bat speed (not sure of the reality of that sensation).  Basically he's creating a lever that is an inch (or so) longer.

Think back on the old  split hand grip that Honus Somebody-or-other used.....you never see it anymore.  Indeed it would give greater bat control but your lever just got shorter, too.

Matt may know, do teams measure swing spped of young players?  Everybody talks about swing spped in golf...wouldn't surprise me if MiLB guys hear it all the time.