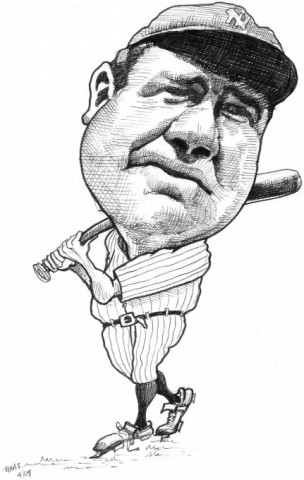 If you just joined us in the bleacher seats :- ) at Bill James Online, the last 15-25 "Hey Bill" mailbag questions are always up in front of the (mere $3) paywall.  Also, Bill has given us at SSI a free hand to excerpt him.  That reflects James' displeasure with the "gimme gimme gimme" authors who resent anybody reading their professional material without sending them a dollar first.  He suggested once that such an author should be removed from all public libraries ... as well as from any other public attention ...

For thirty years, baseball fans have considered James a sort of free public resource, walking up to him in lunch cafeterias and sitting down and all that stuff.  As a rule he's taken this attitude very genially.  One thing that counts huge in his favor, you ask me.

They talk(ed) politics at BJOL as well, though the last month or so it's been limited to Harry Truman and other relics of the past.  :- )  American politics, ah, America itself, has just gotten too hot to handle.  Don't know why this paragraph is in here, but ... Abe Lincoln during the Civil War, "if you don't laugh at it you'll wind up crying."  Feel free to laugh at both candidates in SSI article Shout Boxes, but smile when yer do it ...

He said this today re:  Dan Vogelbach.  From our standpoint, re 'Bach.

There is a certain level of hitter--the David Ortiz, Frank Thomas, Edgar Martinez level of hitter--who is always seriously undervalued as he is coming along.    You take any of those guys or anybody really like him, and you will find SOME scouting reports written about him as a young player saying that he can't play and will never make it.
The reason this happens is that scouts are trained to be skeptical of guys who can JUST hit.   The scouts see lots and lots of guys who can hit, but who can't do anything else.   A scout goes to a college game, picks up the stat sheet; EVERY GAME there is going to be some big guy who is the best hitter on one of the teams, bats cleanup for them, but can't run or throw.   You can't use them.   You get in the habit of just writing them off; you can't use them.
But then once in a while, once every 10 years, there is that guy who is like that but who is SUCH a good hitter that the other stuff doesn't matter.   But from the amateur scout's perspective, it is very, very difficult to know who that one guy is.   (I had originally written that "there is no way of knowing", which is generally true, but you know. . .maybe a scout can see something.)   But when a kid is battering college pitching, there is really no way to know whether he is that one hitter in 5,000 who is SUCH a good hitter than he is just going to continue to beat the hell out of pitchers as he moves along the ladder.   You don't know that, so the David Ortiz/ Frank Thomas /Edgar Martinez /Cecil Fielder gets put into the same bucket with all of the other guys who can hit but can't run or throw.

(1) Notice that James is not relating the way HE sees it; he is relating the way guys like Jerry DiPoto see it.  You can infer that DiPoto is hoping for a lottery ticket at a big-time hitter in 'Bach.

(2) The other add:  Servais' odd remark, a week or two ago, that Vogelbach will hit for very plus power in the big leagues.

(3) We scalded cats are quite used to having pots of Justin Smoak hot oil poured on us.  We kinda have to shake that off.

Once again ... even in Seattle we've seen at least our share of results come out of our system.  Kyle Seager has become, at least to this point, the Seattle version of Sal Bando - a key 3-4-5 RBI man playing a sparkling third base.  Mike Zunino is back in the top-3 pick conversation, slugging .496 in the bigs this year.  Nick Franklin, now age 25,has a 119 OPS this year.  Brad Miller, now age 26, is slugging .497 this year.  Michael Saunders, maybe a late bloomer, is slugging .490 at age 29 along with all the other things he does.

You can be sure that James' take, for what it's worth, is that we Seattle fans overreacted to Smoak, Ackley, and Montero, and refused to Alex-Gordon it on the other guys.  If that be so, we should be as enthused about Dan Vogelbach for next year, as we were about all the other guys before him.

Head says yes; heart says no.  But the head also says that if Vogelbach (age 23 this year) became an Anthony Rizzo (age 24.5 when he started raking) comp, nobody should be shocked.

< Previous post
M's -2 behind the Tigers, with 10 to play
Next Post >
La Liga all shook up
Blog:
Mariners Prospect Talk
Tags:
Dan Vogelbach

Led me to a possible answer I've been looking for.  With the outfield, how do you fit everyone?  Well, what if there's no jobshare at 1b next year?  If you want Smith and/or Guti back they may have to pick up some 1b in that scenario.  Dipoto will certainly acquire a few dozen pieces before That's all at issue anyway.

I'll admit to being tentative about 'Bach at times and it's largely due to Ackley, Montero, Clement, Reed, the list goes on but I'm done following it.  I want to see the success and I'll remain patient.

Smoak, Ackley and Montero specifically?  We are talking about years of waiting on each.  Some guys come through after longer, but the collective compounded frustration for years with them simultaneously...It's hard to minimize or compartmentalize.  I think it's probably a fairly unique experience for a fanbase,though I could be wrong.  There were plenty of Smoak detractors but few who didn't think Montero or Ackley would eventually hit.  For some years there.

++ Some guys come through after longer, but the collective compounded frustration for years with them simultaneously...It's hard to minimize or compartmentalize. ++

You definitely can't minimize it, but this is a Grand Theme on James' website, that the Royals (etc) benefitted from investing in young players.  It's also a roto axiom as you know, "Age 26/27 with Experience."

The *feelings* about Clement, Reed etc (good reminders!) can't be erased, but the argument is still there...

Maybe Zduriencik brought all these guys up too early.  Maybe the idea is that you can ease the growing pains by leaving them in the minors until they're closer to age 26?

Strangely enough, Vogelbach approaches and hits like a contact guy despite looking like a slugger and having above-average raw power. Am actually worried about his power output more than anything. I'm pretty sure he'll put up good OBPs, though not high averages. Hes been striking out a lot despite staying back on the ball, which doesn't bode well for his MLB readiness.

Has had MASSIVE LH/RH splits in the minors. Looks like an extreme platoon bat in the sense of Seth Smith or Adam Lind. LH weakness, glove, contact approach, limit his upside. Current upside for me is the quality platoon 1B/DH career path, assuming no chemical enhancements.

Hes not ready though. Needs at least one full year in AAA IMO, and an offseason with Nelson Cruz. Ms need to figure out 1B elsewhere for 2017.

++ Hes been striking out a lot despite staying back on the ball, which doesn't bode well for his MLB readiness. ++

Or, since he had 97 BB and 101 K last year (if I remember from looking at it earlier this week) the K's are a result of deep counts?

No doubt about it, Vogelbach's instincts are to make contact first and drive the ball later.  It's weird to see from a guy with his body shape.

Complicating matters is the coming FA market. There are limited opportunities to improve the club via FA without getting into a savage bidding war due to few front-line options (i.e. in the OF or SP). One position that is relatively flush with some good/great players is 1B. Bach might turn into a decent 1B, although like Taro I'm skeptical about his splits. But Encarnacion is already a force at 1B. The Felix/Cano/Cruz window isn't going to stay open much longer.

After all these years you can guess where Dr. "Stars & Scrubs" Detecto comes down on this one ... Question is, after DiPoto's winter comments last year, does anybody read him as being at all willing to go for one more "Big Game Hunt" ... certainly would be delighted to think so.

I'm normally against these

I'm normally against these types of signings, but I feel the Ms window of contention is about to close shut. Felix is declining into irrelevance. Iwakuma is declining. Cruz and Cano are well into their 30s and had near career years. Even Seager is unlikely to repeat 2016, and is not getting any younger. Our farm system is a barren wasteland. This is a fringe contender for the playoffs, but it is also a roster on the verge of collapse.

2017 is our last shot at this. We need to do capitalize NOW or we need to rebuild ASAP. Half-baking is not going to cut it. It hasn't for the last 15 years.

I wonder what DiPoto's reply to that would be

Because he must be more clear about Felix than anybody is, and he must know that Nelson Cruz is year to year if not month to month.

He believes he is rebuilding on the fly -- bringing in Vogelbach and Gamel and Miranda and converting Diaz and so forth -- but he also out-bid the world for Adam Lind, Wade Miley and Iwakuma, so he obviously wanted "to play meaningful September baseball" this year.

A guy like Encarnacion costs "nothing but money," but DiPoto said some provocative things about that last winter.

With Felix no longer at the

With Felix no longer at the peak of his game (I know, I know, reinvention has been done before, and Felix showed it his last start), and with Cruz (IMHO) suffering from some injuries that have acted as a governor on his production, that window may close abruptly without health accompanied by some significant growth and consistency from Paxton, Walker, and Zunino. If those three put it all together for full seasons in 2017 we'll be all right, especially if we get a bona fide RF'er (O'Neill or via a trade) and move Smith/Guti to LF.

But if those three young players continue to be inconsistent, it is going to be very difficult to compete to (a) get in the playoffs, and (b) go somewhere once we get in.

As Taro points out, Vogelbach struggled vs. LHP in the Low Minor's.....but he's hit LHP in AA and AAA just fine, thank you.

In Kyle Seager's three MiLB years, he looked like this:

Seager and Vogelbach split their age 23 season between the fam and the bigs.  Seager hit leties a lot worse that year then Vogelbach has.

Seager lit up A-Ball LHP; Vogs didn't.  But from AA to AAA, Vogelbach was the better vL hitter.  Will Vogelbach hit LHP worse than he does righties?  You bet....but indications are that he's a better MiLB hitter of southpaw chuckers than Seager was.  Seager at 28 is now a stalker of lefties.  .717 for his career (didn't start there).  Vogs will hit them just fine.  But you keep Lee around next year to help him out.

I'm the odd duck, I would rather see him in there now than Lind.