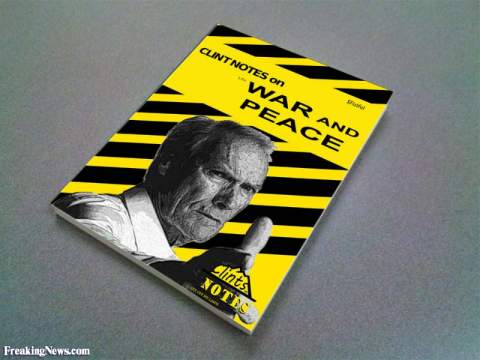 A'ight, youse mooks.  Let's see YOU win the internet, if it's so easy.  Eight years from now, when you're touching your Captain Picard Klatpin to place calls to each other from across the break room, they'll remember your ingratitude.  :: bah humbug ::

We kid, we kid.  Tell us everything that needs to be better, starting with the shtick, of course.  Then smile nicely and ask what we take in our coffee.  Personally, I take 2500 mg acetominophen and a sprinkle of dandelion.  If you could hang a coffee drip for me, so much the better.

CliffsNotes, according to the first 25 or so words that CliffsNotes is allowed on Wikipedia, are "student study guides that explain literary works."  With the next 25 or so words, the ever-objective Wikipedia complains that CliffsNotes "lets" students bypass the actual literature.  Share with the collective why this would be a bad thing, Comrade.  The list of 100 most-assigned college lib arts texts is quite abominable.  But then, so are Dr. D's noodlings, so -- as with most of his and Howard Johnson's work --  this post collapses pleasantly in on itself.

"Letting" you, the faithful reader, bypass actual baseball literature has always worked for SSI.  (Dr. D favors "letting" you do as you please.  You're welcome.)  Here, we'll just give you the essential and you can be on your way.  The below applies to Nick Neidert.  Andrew Moore, who was taken way later in the draft, is irrelevant and will be dismissed in a postscript.

WHAT GORDON SAID ABOUT NICK NEIDERT IN THE SHOUT BOX

(Can't figure out how to resize.  CAPTION:  Nick Neidert Actual Size)  Okay, okay.  You don't have to ask what we take in our coffee.

WHAT OTHERS ON THE NET SAID ABOUT NICK NEIDERT

Not much that's interesting.  One thought floating around is that MLB clubs are crazy to not like short righthanders.  But not only is there no crying in baseball, there's no drunken blogging, either.  Well, there is, but not that you the SSI reader cares about.  Short righties do throw the ball on the plane of the bat.  Erasmo Ramirez and Ian Snell say hello.  Do you have any idea how fine Hisashi Iwakuma has to be every pitch he throws?

That said, Neidert is hardly a Smurf.  Erasmo and Snell, although they are personifications of the idea rather than legal proofs of it, walked easily under a bar 6' off the ground and pitched like they could walk under one 5' off the ground.  Neidert is a lithe, whippy 6' 1" and is as physically different from Erasmo as Jar Jar Binks was from that froggy guy who was mean to him.

At Bill James Online, there's been a lot of talk about post-HS pitchers going more and more with Tommy John surgery even pre-emptively.  (How a surgeon squares this with his ethics, Gordon can write up for us.)  You would think Nick Neidert would be a candidate, if anybody was.

Supposing you've got a chance to draft Chris Archer but you gotta wait five years?  Somebody draw up a list of the David Robinsons and Roger Staubachs of the sports world.  Ichiro was kinda like that.

:: snaps out of hypnotoxic bliss a few minutes later ::

< Previous post
Fly By Your Instruments, Not Your Instincts
Next Post >
Be Right Witcha
Blog:
Mariners Prospect Talk