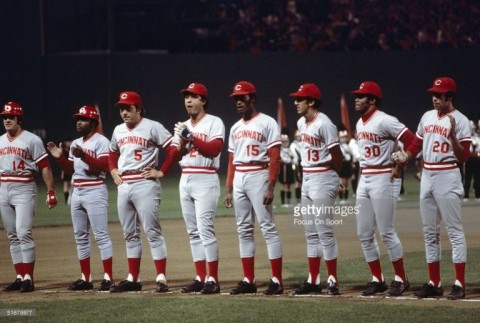 (8) None of the above guys had two years in AAA anyway (well, not until AFTER their splash debuts)

The correct answer, of course, is (9), none of the above.  Ben Gamel isn't a Seattle Mariners prospect.

Now, if Jay Buhner had failed in his transition from New York to Seattle, THEN you could worry.  But since he didn't, Dr. D for one is going to feel perfectly free to hope that Ben Gamel becomes Colby Rasmus.  Or somebody.  Certainly Gamel and Rasmus share physical similarities.  They both look like a very specific Lex Luthor henchman.  The one who Batman is about to grab by wrist and ankle and use to make a human-shaped, cartoon-slats hole in the drywall.

Seriously, I'm at a loss to think of which Mariner ever pulled off Gamel's look.  Great, great baseball face.  But can you imagine if a 1910's ballplayer had spotted him with that huge wad of Barbie-pink bubble gum hanging out of his mouth all game long?  This is big-time TV nowadays, man.  Somebody's going to say SOMETHING.

By hitterish Valle means ... no, scratch that ... by hitterish DR. DETECTO would mean adaptable, calculating, supremely confident, in control of his faculties, vaguely threatening.  It's a term you used for Ken Griffey Jr. as a rookie, for Seth Smith nowadays, for Robinson Cano at any time in his life.  You get a bit of a field-level sensation that it's the pitcher who is in trouble, rather than the hitter.

To which we've got to add that, yes, Gamel had excellent takes all the way through the game.  Deciphered the break on the ball early, decided on the (correct) takes early and with conviction.  HOWEVER, he got three good pitches to hit that we noticed, and forthwith he:

In hitter's counts he Wagged More, Barked Less.  Which bumper sticker works well during those pesky Oakland street riots, but less well with men on base.  But the Exec Sum:  yes, the guy looked like a Paul O'Neill "Hitterish" type for one game.   Till he swung the bat.

The same could happen to Boomstick for one game, of course.  It's one game and Dr. D's responsibility is to look "bloggerish" in the postgame.  We report, you decide.

If you saw the game, you saw Gamels respond to a 4-0 deficit in the bottom of the first by walking.  Beautiful!  Then Guillermo Heredia smoked one into the LF corner, Jefry Marte scampered over to collect it cleanly, stopping Gamel at third ... NO WAIT HE'S COMIN' AROUND.

No throw.  There is no telling what the old timers would have said about Cool Papa Bell on that play.  That he ran it backwards?  That he dipped snuff between second and third?  That you'd a sworn he forgot to touch two or three bases on the score?  Suffice it to say that there hasn't been a Mariner who picked 'em up and laid 'em down like that since at LEAST Casey Kotchman.

Well, Brad "Crazy Legs" Miller was fun to watch on a triple.  And Ichiro, we're not going there.  But I like Gamel's chances to create invisible runs on the bases.

If Gamels puts up a .330/.400/.475 slash line in September, as he easily could, then we'll obviously have no problem trading him this winter.  For Roenis Elias, minimum.

Or if we decided to keep him, the 23-year-old Ken Griffey Senior joined the MLB fray in September 1973, batting .384 for one month with .570 worth of extra-base hits.  Hey, man, I was there.  Senior then had a decent 1974 and beginning in 1975, provided the Reds with many years of .300-and-plenty.  No, we're not guaranteeing a perfect comp here.  Griffey Sr. was my own boyhood icon for "hitterish," a guy who couldn't do all that much except slash the ball on a line any where, any time he felt like it.

M's have got an interesting new hitter.  One game in, he remains interesting.

When I look at Gamel, I see a cross between Eric Byrnes and Jeremy Reed... at least in the looks department, and I really hope nothing like either in their Mariner careers.

Byrnes is an inspired call Rain :- )

1st two at bats I was stoked to his is disipline. Absolutely knew the strikezone. Third at bat even more impressed. With a robot ump he would have drew a third walk, instead he struck out looking to end the big 2nd inning. Ackley had many problems but one seemed to be the accumliative effect of the lefty strikezone. Well... thats the first one to Gamel.

Agreed on the robo-zone walk

And if umps want to job him on pitches three inches outside, here's hoping he'll just keep walking back to the dugout Olerud-style.

Ackley seemed programmed to either All-Star Or What's The Point and Gamel seems to have accepted his repeat of AAA in good grace.  Here's hoping his makeup is different from Ack's.

FiveThirtyEight calculates that, in a vacuum, the M's would be 5 games better if they kept everyone they drafted...

For what it's worth

2. I like guys from his template to not have the long one-hand follow-through.  But it does create leverage and loft on pulled balls.  I think it does give him a decent shot at 14 or 15 homers PDQ.  He will roll over some weak GBs to 2B as the trade off.