Skip to main content
KK
Konspiracy Korner - the U.S. Constitution and sundry
at SSI, express any idea you like. In an adult tone, with respect. Thanks Bat! 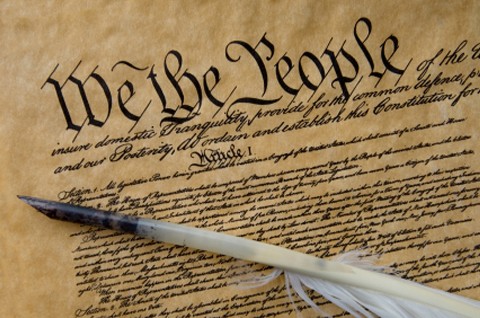 Bat571 brings the Anthem discussion to a rather thunderous pause with the following gem:

As a retired Navy Officer and proud member of a military family whose roots are similar to those cited by James Webb in "Born Fighting" (Scots-Irish (Ulster)), I believe I'm entitled to an opinion on this. My family  has fought in every American war since those against the French and Indians. Outward show of patriotism as support for the government and the military is fine, but it is just as patriotic to point out the places the country needs to improve on, or where we fail to live up to our ideals as a nation.

I grew up and came to manhood in the Civil Rights era and the Viet Nam era. The trials of those years made America a better, richer nation, with more opportunity for everyone. Now, we no longer want to share that? Is that why my family has fought in America's wars - so we can keep all the blessings for ourselves?

Somehow, patriotism has beome associated with the nostalgia for a "simpler, better" time, (or even an earlier time with a white-dominated power structure). I grew up with Japanese-ancestry American kids whose parents had been "resettled" and Jewish-ancestry American kids who lost family members in the Holocaust. Was that a "better" time because my family was doing well?

The War fought by the "Greatest Generation" was fought by a segregated military. FDR knew of at least some of the Holocaust, but felt politically unable to do anything but win the European War as quickly as possible. Many feel the time of the 50s when America bestrode the world was the best of times. I think the best of times were expressed by MLK as "I Have a Dream".

To me, then and now, questioning whether we're on the right track, and trying to persuade the greater public to support change and to be tolerant of others we share this nation with are the essence of what it means to be an American citizen. Along with that willingness to change is a willingness to share the blessings we enjoy, both with our fellow citizens and with the greater world. And the greatest of these blessings are those freedoms guaranteed by our Constitution, which the miltary vows to support and defend  (N.B. - not to support and defend some potentate). Extending those freedoms and some of our prosperity to all we could has been what really made the "Greatest Generation" great.

My "name-line" family arrived in North America in the late 1630s (elected County Clerk in 1638 in Binghampton, NY). The other lines of my family, Portuguese Morisco seamen and Scots-Irish lumbermen, were here by 1715. So, other than Native Americans, I think we're as "old-line" White, Celtic/Lusitanic, Protestant/Mormon, as it gets. But that  pre-revolutionary population did not make America great. All they could do is set the standard of being the "City on the Hill" that the Puritans spoke of, and that President Reagan re-invoked as the American destiny.

I think I understand how this country became great - immigration, trade, entrepreneurship, developing our resources - especially our human ones, and adapting politically as necessary, under a Constitution which was and is a human marvel. To resist change is human; to vilify those who feel change is necessary is, possibly traditionally American, but still not helpful. Even the Constitution has mechanisms for change; the Founding Fathers were incredibly wise. Would that we inherited some of that wisdom.

The Defense Department officials trying to cultivate support for the military - both recruitment and the military budget - are doing their best to encourage patriotic sentiment. But I heartily agree with Fallows; many times it's less than sincere among the political elite. Sometimes I think it also goes a bit too far. But this hoorah about the anthem is as "poseur" as it gets.

It's a funny thing; most of the military guys I've known have felt just about the same way.  They roll their eyes just a bit at the "rah-rah" guys who take the National Anthem hyper-seriously.  For them, love of country means far MORE than standing for two minutes and then forgetting about freedom until the next time a song happens to occur.

By the way:  Cindy and I went to the game tonight and when the Anthem started, the server stopped taking our order.  About half the crowd seemed to put their hands over their hearts and such.  I'm not that type, but about halfway through I did put my cap over my chest, to show respect for them.

Bat571 brings up the fact that America is about the RIGHT to protest.  Just so!  And it is precisely here, in the territory of this point, where I personally wonder how much the Evergreen College socialist kids understand about the USSR, or Saddam Hussein, or Mao-Tse Dong, or the Kims, or what real totalitarianism is really like.  Love Trump or hate him, I notice that the kids seem awfully unafraid of insulting this terrifying dictator.

The internet may prove the salvation of free speech.  When the UK jails somebody for reporting on pedophilia, it gets out.  Not because of 20th-century media, but because there is no way to herd the cats that are the YouTubers and bloggers of the 21st century.

Bat calls the Constitution a "human marvel."  We're in our 3rd century now of living as a free people .... why?  Essentially because our society respects a single document to such an extent that --- > those who try to gnaw at it, to call it an outmoded essay by old white men, those folks, --- > cannot gain traction.  They can't even gain enough traction to amend a single clause in the Bill of Rights.  .... again, with Twitter and the Kyle Kashuvs of the world playing a large role ...

Take away the guns, which is step one in any totalitarian evolution?  (Research 1938-1944 and how badly any group of Jews coveted even five or ten firearms, and the difference they say the guns would have made.)  In the comments, gentle Denizen, you can write about how much you believe the U.S. public should be disarmed.  You have the right!  Your problem is a simple one:  others will argue the opposite.  It's been that way since 1787, and God willing, it will be that way for another 240 years.

Take away the right to be safe from unreasonable search and seizure?  Take away the right to a fair trial (as in the recent UK case), provided that the one being tried did something really wrong like disagreeing with you about the obvious?  What ensues in America is:  a public debate about the Constitution.  And EACH time, Sisyphus' attempts to roll totalitarianism up the mountain gets kicked back down the mountain.

The system of government that you and I have is the worst possible.  Except for all the alternatives.  Including "anarchy," which evolves into "the survival of the strongest."

Thanks for the mini-essay Bat.  Hope to see 50+ replies to it.