Skip to main content
Hottest Groks
Wade LeBlanc: Malcontent has Dr. D teetering on his heels
every 87 MPH lefty is the next Moyer. Could this actually be the exception that proves the rule? 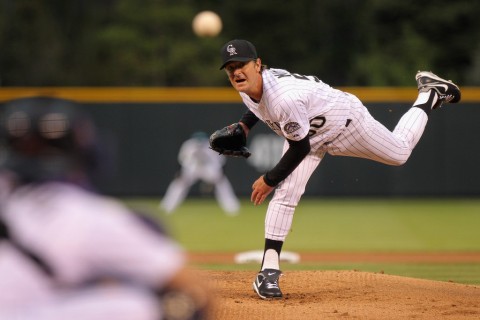 About three starts back, Andrew (Malcontent) offered the outRAGEous opinion that Wade LeBlanc had a very nice chance of becoming the second Jamie Moyer.

This is the sort of assertion that is rejected out of hand because (1) every 87-MPH lefthander is the next Jamie Moyer, whereas (2) there have been exactly two Jamie Moyers in all of baseball history, those being Moyer himself and Preacher Roe.  (It so happened we asked the Founding Father whether there are any precedents for Moyer -- soft-tossing lefties who wandered the tundra with survival beards, for 10 years, and then became upper crust All Stars.)

On the other hand, this WAS coming from Malcontent, so you have what Scott Adams loves to refer to as "cognitive dissonance."  It is as if G-Moneyball told you that some scrub in A+ baseball was going to be one of the 10 best players who ever lived.  Both ideas (G and Top 10) cannot possibly be right together, and both ideas cannot possibly be wrong together.

Brilliantly, Dr. D solved the problem by ignoring it.

Almost as brilliantly, Wade LeBlanc solved the Mariners' problems by tossing one remarkable start after another.  He could no longer be ignored, so Dr. D settled in on Saturday with a bag of chips and a can of soda to see just what exactly was going on here.

One thing LeBlanc does indeed have is the Moyer 77 MPH drop change.  The following observations about it can be computer-logicked as "TRUE" clauses:

1) The shape of it is Ecstasy Personified, and we're not talking about the street drug.  It rolls off the table Time. after Time. after Time.  Dr. D would pay $30 Pay Per View just to watch this man throw a changeup.  It's as good as any we've seen except Moyer's, maybe including Moyer's.

2) The location of it is far beyond "consistent."  It comes out of his hand and hits the low-away corner for a strike as if there is a magnet in the ball.  Somewhere along the line, this man polished and refined and honed this drop change until he can throw it in his sleep.

3) He throws it fully 1/3 of the time, drawing scads of embarrassing swings.  Because he does it so often, the enemy hitters can never really let the bat fly.  It is a flinch situation.  As with Moyer.

4) .... for some reason the run value on it is a little bit high, over a scant 40 IP; no doubt that's because a few of them leaked out (not that kind of Leake!) and hurt him.  But you can take our word.  It's a fearsome weapon.  Remember Doug Fister's change, his rookie year?  This is WAY better than that.  It's got not only arm action and separation, but that critical drop-flop finish to it just as the batter swings.

Mal and I sat there (on Slack) and watched LeBlanc paint the black on one righty -- 5 of 6 pitches were 86-87 fastball and they were ALL in a 4" strip on the corner.  The ump walked the hitter.  But seriously, LeBlanc can paint.

He's at 1.58 BB per game on the season and that is despite all the reasons that he is paddling upstreme on his ball-strike count.  He's AIMING to nick the corner, constantly -- and almost never walking anybody.  That is plus-plus command, by definition, Mr. Scout there.  You can't do better than a 1+ walk rate.  But doing it with 87?  C'mon now.

If you or I could pitch the ball into a teacup, you or I could win in the majors.  87 MPH is not a death sentence; it is a total lack of margin for error.

LeBlanc twirls his gloveside cutter (-3 MPH, 83) with almost the same command.  So it's a lateral whipsaw -- the hitter leans out over the plate (to align the outside corner with the center of his bat) and here comes the fastball -- NOOOPE! it's not swerving armside!  It's coming AT you!

Such a pitch is called a "backup" pitch.  Some people, even those around baseball, think 83 MPH doesn't hurt.  We've told you the story of a beat writer wandering around behind home as Moyer was warming up ... WHOOP the ball got loose and hit him in the face.  A real quick trip to the hospital and a gruesome injury.

That is not a tennis ball they are throwing around out there.

You can't throw a drop change to a left hand hitter; it falls right into his loop zone, the natural place his barrel goes even if he's not trying.  That essentially leaves Wade Leblanc with two pitches vs LHB -- a slowball in or a slowball out.  Maybe up, maybe.  Or pound the knees, knee CAPS better be, and hope for the best.

Dr. D could be wrong here; maybe he just hasn't thought it through.  Jamie Moyer had some problems with LHB, but Jamie Moyer had 3 pitches rather than 2.  He had a real nice Marc-O Gonzales curve ball.

So my last remaining question -- well, there are two.  (1) What is LeBlanc's game against lefties?  and (2) can this guy really execute in such a hair-fine manner, game after game?  (You realize we mean, can he execute in 70% of his starts.)

So what happened here?  If this guy got good, how'd he do it?  Malcontent (again) points out that he spent a year in Japan.  Dr. D wavers instantly as soon as this argument pokes its nose anywhere out of its cubbyhole.

In Japan they are very good at the soft game, better in fact at it than we are.  This is a totally feasible explanation for LeBlanc's refinement.  Remember James' axiom:  given enough time, MOST or ALMOST ALL pitchers would figure out SOME way to get batters out.

LeBlanc was never awful; his career ERA is 90 coming into the season.  A 90 pitcher is a perfectly decent #5 starter, maybe #4.  It's just that suddenly he is managing games and locking down lineups like Moyer in his prime.  The 7.0 / 1.6 / 0.9 slash line is near-Marco-esque ;- ) though LeBlanc's 8.1% swing and miss rate isn't SUPER inspiring as to his K's going forward.  (Ian Kennedy gets 8+ K's with an 8-9% whuff rate and LeBlanc only needs 6 or so strikeouts with a 1+ walk rate.

We don't know whether the M's will stick with LeBlanc through his next two bad games, much less through the year.  But man, I'm taking Malcontent's Jamie Moyer shtick a lot more seriously than I had been.  The man has flat-out thrown dimes this year.

I've been busting Dipoto's chops this year, well, like he cares, right?  But he grabbed LeBlanc as a stop-loss and maybe, what do you think?!   Did he see all of the above before the move?  Assuming even that the above is LeBlanc’s new, post-NPB reality?

Hungry for more Dr. D shtick?  Well, of course you are.  And sumptously shall ye dine, should you click through to his second blog Detect-O-Vision.

LeBlanc does have a curve

Links don't seem to be working normally, so I just laid them out.  Pitcherlist shows his curve, brooks says he's been using now often every game, with the most coming in his last start, 14% of his pitches on the day (and a third of his pitches to lefties, which is to say 10, while throwing only a single change to the LHB apparently).  It moves about 5 mph slower, and breaks lower than and in the opposite direction of his change.

He got 2 swinging strikes from lefties in the last game (I checked, according to Savant they were against Kepler and Morrison, alas-no video).  He definitely had the pitch in drydock before the last game, but he seems to be gaining some confidence in the pitch at this point.  I'll take a look at the playback of the game and see if I can spot them during my Memorial Day maybe.

Okay, that brooks link is a real pain

But you all know how to get there if you want to look.  But anyway....I like Wade's chances of being the next Moyer, but if he is always going to be hard to trust.  This kind of control artist is much the same as a knuckle baller, any start could be a bad start, any start might be the last time he can consistently get major League hitters out because his control has to be so fine.  He could have the feel for the next 5 years or lose it in the next 5 starts, but the fact that he has it at all right now, start after start is something special that I'm happy to enjoy.

What he really needs is to establish a personality of professorial brilliance with the press the same way Maddux and Moyer (and Miguel Batista!) managed to do.  Throw out a few gems about randomizing first pitch strike intention or maybe he could just crib from SSI? Sell some jerseys, get a cheering section (The LeBlancs), compete for a Cy Young around 40, and then we can make serious comparisons to Moyer ;)

Whenever a pitcher's results change, I ask "is he doing something different and is that difference likely to be permanent (change in approach) or is it a variable skill (fluctuations in command, pitch location, etc)...if the latter is true, then you have to wait a lot longer to tell whether the change is real or random.

In LeBlanc's case, I see three significant changes in the statcast data.

1) he's becoming more of a flyball pitcher over time

3) the Mariners are actually ahead of the game for once, and are shifting more often against lefty hitters but much less often against righties (throwing his game, you should expect righties to either hit it hard up the middle/to right or top it softly to the pull side...or when he misses, hammer it on the air pull side)

Moyer, at his best, was an extreme flyball pitcher...pop ups, cans of corn to the outfield on hitters who were leaning with the butts sticking out to cover that invisible change up. But this is a skill stat, so we have to wait and see whether the trend is real.

The last...that's real, knowable and permanent and should result in LeBlanc beating his xwOBA consistently as long as the team keeps defending this way when he pitches.

I think you're right about the shifting

He's absolutely smashing the BABiPs of RHB, but I would say that he's actually handled righties pretty well for years, probably because of that change, but the key to his side's if going to be finding consistent success against the lefties.

To that end, he does seem to be getting the best depth and horizontal movement on his curve of his career, and since the "springy" balls appear to be gone his hard contact numbers are sinking back to his career norms (lower than average hard contact for his career).   When you sort to his stats on starts vs. LHB (when he's used his curve), they are batting .250/.286/.350 against him.  The Mariners may have figured something out this year about curve balls, as this has quietly become a curve ball heavy (and improved for Pax, Marco, Leake, and now LeBlanc?) Staff.