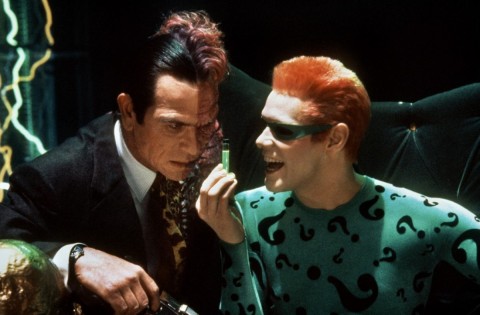 My son dragged me to the lasted Pirates of the Caribbean serial.  The movie was unfunny, it was grotesque in spots, Johnny Depp mailed it in.  The movie was lifeless and the cameos were self-congratulatory.  But!  I was glad that I went.  The guy who plays Capt. Barbosa is riveting.  And the backdrop, the water and the whirlpools and nature at its most threatening, was enjoyable.

There are a lot of movies like this:  Movie Blows Chunks, Actor Rocks Hard.  The Last Stand was a cruddy movie overall.  But there is something about Arnold Schwarzenegger where I just enjoy every scene he's in.  I think it is because he is such a massive "Winner" in real life that you're always fascinated by what's going on in his mind.  Also Johnny Knoxville is kewl.

Remember the musical guests in Blues Brothers?  HEH!  Jim Carrey as the Riddler in that hopeless Batman movie:  Is Every Body Listening?  Here's the Bargain!  I'd go to that movie and ignore the rest of it, in order to catch Jim Carrey's scene where he bargains down Two-Face.

You can think of your own.  But the point is:  baseball fans don't have to be engaged in a pennant race, in order to geek out over Mitch Haniger tonight.  The 2017 Mariners have LOTS of fascinating ballplayers who put on great invididual performances, even if the overall movie turns out to be a bomb.

BEN GAMEL - everything else aside, doesn't this guy LOOK really cool?  Doesn't it make you smile to watch him step into the box, and to watch him move around the bases?

TAYLOR MOTTER - He has struggled mightily but Dr. D is still very interested in where he can go after he makes his adjustments.  And the persona?

GUILLERMO HEREDIA - I'm pretty much swooning here.  His stats are backing up the +15, +20 runs glove concept, and he is already a quality hitter.  But as a role player?!

JARROD DYSON - I'll walk into the front room to watch HIM take an at-bat.  His stolen bases are looking practically automatic, and I'll always watch a stolen base.

MIKE ZUNINO - Almost better separate this one out ...

JEAN SEGURA is not in the game tonight but man.  I never tire of watching the "right handed heir to Ichiro" confirm his trajectory.

JAMES PAXTON - has hit a road bump, which discourages me precisely as much as Randy Johnson's 1993 road bumps did.

SAM GAVIGLIO - of COURSE I'll tune in a ballgame for no other reason than Sam Gaviglio.  Gotta see where he's going.  Another career pregnant with possibilities.

JAMES PAZOS - another interesting question, this time the very real possibility that Pazos will become a dominating AL setup man.

I could literally watch an M's game for any single one of the above actors.

If the 2017 Mariners wrote off their pennant chances right now -- and there is zero reason to do that -- they'd be awesome to watch as the 2017 Rainiers.  :- )  Bill James once claimed that baseball was never more than a few seconds from the front of his mind - that "I sometimes stop thinking about baseball in a movie theater, but it has to be a good movie."

The backdrop at Safeco, it's a nice setting.  And there are more than a few Captain Barbosas for me to watch.  If the good guys steal the pirate ship and win the day, that will be fine too.

See you at the ballpark,

...it's obvious none of them are watching.

Heck, I'm not WATCHING - I hardly can, where I am - yet I'm paying attention. There is so much potential on this team; we have literally been derailed ONLY by injury. (Not that other problems wouldn't be continuing... but the talent would overawe those issues had we been we completely healthy - or even just an AVERAGE degree of healthy!) Then of course we could be ignoring that whole 'winning' nonsense, and look at the sheer interesting characters and talents we have to watch - as Doc says. What, Cano isn't tune-worthy? How about Edgar? I guess DiPoto doesn't really get his screentime in-game, but man... there's an epic series about to release a few dozen new episodes, if ever there was one.

I don't think national writers can possibly catch everything. But how do so many not catch ANY of this?! There's a vibe in the air around the Mariners that won't go away, not when they cough up four after returning to .500, not when key players head back for their second DL stint, not when we follow 10-0 with 0-10. The talent this team possesses is obvious and so the end of this season's story promises to be must-see TV... but you don't have to wait for the final chapters to get the action going. Wake up!!!