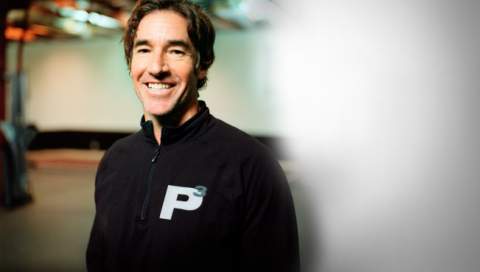 BeachBody, which manufactures P90X, Insanity, Body Beast, etc., is an oily parent company that borders on multi-level marketing.  BeachBody itself, I got no use for.

Tony Horton can't be happy about his association with them, but ... . I think he believes that it is a loud microphone from which he can attempt to influence people towards the right ideas.

Most people have a tendency to assume "one home DVD exercise program is as good as another" and that's a fair assumption until you look into it.  HAVING looked into it, I see Tony Horton (P90X) as the man who has revolutionized "functional fitness."  The fact that he brought in Marcus Elliott for P90X2 helps cement that.

Jack LaLanne's widow once ran into Horton at a convention and gave him a big hug, telling Horton that he was the heir apparent to her husband.  LaLanne was into health, performance, exercise for the purpose of becoming a better human being, and that's what Horton is into.  "When she said that, I just said, Okay, shoot me, there's nowhere to go from here."

Horton just happens to be one of those guys who was very into functional fitness, who researched it, and came up with all the right ideas.  In every industry there's a guy or two like that.  In fitness, it's Horton.

The bodybuilding forums sort of wave Horton off because he's not big.  He doesn't go into the gym to do the "teenager lifts," a bunch of bench presses and curls; he's not about working out so that you can flex into the mirror.  I dig this.

Horton will walk onto an army base and ask, "Who's the pushup champ here?", and, at age 54, destroy them in any boot camp exercise they choose.

Three basic ideas you need to "get" in order to "get" Tony Horton and Jack LaLanne:

The original P90X was about four basic categories of bodyweight exercises:

You cycle these quickly so that it is both power and cardio.  If you hadn't noticed, this is the same basic concept that the U.S. Army has used in boot camp training for 100+ years.  The Army measures health very simply, by using:

Exercise isn't rocket science.  Show me a guy who can bang out 60 pushups, 60 situps, who can touch his toes and run a 13:00 two-mile, and I'll show you a guy who can go to Iraq and break things.  The rest is conversation.

Of course Horton is extreme - able to climb a rope with only his hands, upside-down - so he finishes his philosophy off with "WORK ON YOUR WEAKNESSES."  You can do 40 chin-ups?  Great.  Now it's time to learn how to do push-ups with four balance balls.

You'll see all sorts of gym rats who do the same 8 "ego" exercises their whole lives.  At age 40, their backs are shot, or their knees are gone, or try asking them to learn ice skating.  Meanwhile, Jack LaLanne was enjoying 120-minute workouts at the age of 90.

P90X2 was indeed intended for P90X "graduates" -- it is based on Horton's own "boxes and balls" day.  These are the pushups with hands and feet on 8" rubber balls; it targets the stabilizer muscles after the large muscles are tuned.  It emphasized balance and body control, and was expressly for weekend warriors who wanted to attain NFL-style fitness and performance.

It's loaded with exercises like "One Leg Med Ball Burpee" and "Three Point Squat Press with Med Ball" and ... every military officer I've talked to has said "You show me a recruit who has done P90X and I'll show you a man who will have zero problem with basic training."

Hatha Yoga is basic to P90X.  Some of their "coaches" (yuck) will tell you "If you are not doing yoga, you are not doing P90X."  Not real far from the truth.  Most people who skip one disk, skip yoga.  In a real sense it's the toughest workout.

Kareem Abdul-Jabbar insists that yoga was the key to his extended NBA career; the Seahawks also emphasize it.  Think of yoga as extreme-extreme stretching.  Your ankles have no muscles in them; one-legged "Tree" poses, on a med ball, are the key to making the ankle ligaments stronger and more supple.  It's almost derelict for a pro athlete to refuse these treatments.

(1) Fascinating to me that Marcus Elliott is consultant to (1) P90X and (2) the Seattle Mariners.  To those who are Horton / LaLanne fans, like me, it makes only one conclusion possible:  the Mariners' fitness program is absolutely state-of-the-art.

(2) It makes me wonder why Michael Saunders felt it necessary to go elsewhere for his physical training.  I mean, why? What did Elliott's program lack?  For me, it calls into question Saunders' "independence."  There is independence and there is being recalcitrant.

I dunno.  There's my take, from the third deck.