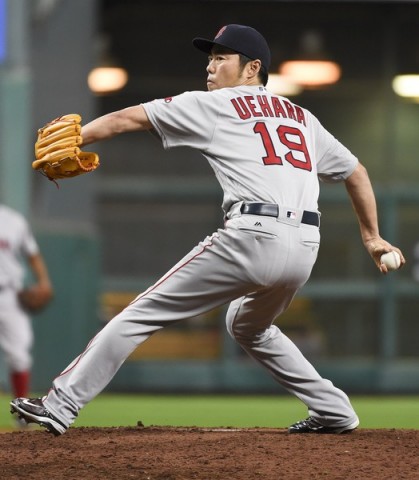 You wonder if the M's would think about Taro's idea about 'Kuma in the pen.  Bear in mind that Taro knows NPB starters/relievers like you know interior line play in the NFL.  Well, maybe that's a bad example... like Geoff Baker knows the blue lines in hockey? ... no ... suffice it to say that I'd listen to Taro's opinion on Hisashi Iwakuma before I'd listen to my own.

Nippon pitching isn't about genetics.  It's about a way of approaching the game, a way of preparing.  There is no racial element to comparing one Cuban to another, or one Nippon player to another.  They are isolated environments with distinctive ideas about the game.

In medicine they have a general diagnosis along the lines of "chronic wear and tear."  Dr. D has this in places himself.  It doesn't mean that something's going to rip in half, necessarily; it can just mean you're going to be weaker.  Jered Weaver's wear and tear just kept reducing his speed, and then it began to eat at his command.  Come to think of it, this winds up happening to, um, everybody.

It seems quite feasible to me that Iwakuma would be back to 89, 90 MPH if throwing two innings per week.

The usual question could be, can you throw feather-soft paintballs right into the mitt, Pitch One, as a reliever?  The difficulty of that is why most RP's are max-effort flamethrowers.  Not to say Dennis Eckersley -- and Koji Uehara -- couldn't do it.  If a great control pitcher can throw that way from Pitch One ... Eck's comment was "if it's me against you one time, I like my chances."

My Q for Taro would be whether he thinks Iwakuma would have his best command in this context.

For what it's worth, not a ton -- are Iwakuma's stats good in inning one?  For his career, his best innings are IP 1-2, this despite the fact that better hitters lurk there.  His CTL is 235:47 lifetime in those innings.

It's just a cyber discussion since the M's haven't whispered it in any way, shape or form.  But!  I could easily see this occur suddenly:  "We just think this is a way for Hisashi to get some velocity back right now" is a perfectly normal Baseball Story.  Also, the very precedent of Uehara himself is valuable in tamping down the fiercest opposition.

Since the 3-4-5 slots are already dubious, it would take a lot to move Iwakuma out.  Namely, their certain knowledge that his starts are not presentable on television.  If that's true, this org will be the first to know.  It's a great organization.

A more than fair argument for a BP move.  He would have to get shelled for a couple of more games, well...one, before there was any internal discussion, I suppose.

But we've got some young guys knocking on the door, loudly.  Gallardo should be worried.  Kuma has a bit of rope yet.

What I've been thinking.  1 more start like that and I'm waving banners and such.  Right now I'm on the fence as to whether it's necessary due to Gallardo partially.   One more time through the pair and then evaluate.  I'm assuming since we haven't heard anything yet that there's no medical recourse that would be better.

The need right now is bigger in the rotation although there are options.  In fact how nice is it to be saying "bring this player up" and "play that player" as opposed to "we should trade for..."?

His stuff is well suited for

His stuff is well suited for relief given it's the kind of arsenal that plays up if you go higher effort. Rise  fastball, split, etc.

I do think both his command and stuff will be pretty drastically improved in shorter stints. To what degree its hard to say until you actually throw him out there.

It seems to me in the last two years, and last year especially, that Iwakuma has been pacing himself to go extra innings (incentive related earnings). It's  made him worse, hurt him late in games at times and late in the year.

He looks like he's done as a starter and was always a logical option to convert later in his career.

If it's easier to get Kuma out than Gallardo, do it.

Seems we've got two problem spots, and the existence of a strong lineup doesn't negate the imperative to improve what clearly needs improving.

Rumors of his demise...

... may be overstated. Not that I have a ton to go on here, or that I would presume that I understand Kuma better than Taro (or Doc) does. My two cents is merely this: he's had one disaster start, and two mediocre ones. Mediocre because he had six BBs and four Ks in them. He also only gave up six hits in 12 innings, albeit with 3 well deserved Back Leg Specials. I get that ever since Kuma signed, we've all been waiting for his bionic arm to abruptly fall off... and when that didn't happen, we all switched to waiting for him to hit the critical mass point of diminished stuff. Maybe he's there now. Or maybe he's muddling through a mediocre stretch, trying to figure out how to emerge from the cocoon as a fully-fledged Jamie Moyer. Normally hoping for someone to become Moyer is another way of saying they're toast, but if anyone has a decent chance at that kind of renaissance it's got to be Hisashi-best-command-since-Cliff-Lee, right?

Of course I have nothing against discussing what our fallback position is if it turns out Kuma entered this season like Austria-Hungary entered WWI, looking outwardly promising by internally on life support. If so Doc is right, the org will be all over it soon enough. They're pretty good these days. My only point is that of the things that worry me right now, Hisashi Iwakuma's arm, after a start where he said his front side was flying open all the time, is not terribly high on the list. He looked crisp in Spring Training, and now he's had a few bad starts. Let's see if he can't bounce back. I won't worry unless he gets bombed in two more starts, quick succession. Otherwise I say let him work through it.

BTW: Sorry I turned into a ghost again. I'm still lurking, but my schedule doesn't allow me to do much more than that. Thanks to the wonder of MLB.tv robber barons, I'm blacked out of Mariner's games until almost midnight these days. So I spend the evening avoiding spoilers, watch the game until 2am, and then have to go to morning classes before I can consider getting in a comment. Luckily the conversation keeps chugging along without me, and apparently all it takes to bring me out of the woodwork is an article attacking a Civic, who I then feel obligated to play devil's advocate for. Abandon MLB(tm) vets at your own peril!

Was also going to suggest it much like Taro.

Uehara's a bit of an aberration because he's always wanted to play.
He went to a JHS that had no baseball team (did track), a high school that already had an ace (this means you don't get to pitch much), missed a year of college baseball because he couldn't get in and still became one of the best pitchers in Japan.
So, his approach is more or less do-anythign-to-play.

That said, I think Iwakuma is might be a player type that would be receptive to relieving.
But you'd definitely need to talk to him to get him to roll.

But that's Qualifying Offer money, which is typically declined these days.  You would think that both Iwakuma and the GM's are sophisticated enough to see a light IP year as a plus going in to his contract.  They're going to be very skittish if he's throwing 85 MPH and spending time on the DL in Aug-Sept.

So if I were the M's I would consider throwing Iwakuma the player option that is 100 innings away, and converting him to RP.  But that would be pretty unconventional.

I see a couple hurdles coming with this thought process

I could see the money being an issue for sure, but...

The biggest hurdle is Kuma's endurance itself. We all believe Kuma pitches better with a longer rest, and the M's want relievers who can pitch back to back games. Those 2 beliefs don't mesh well, and probably will prevent the M's from even talking about it.