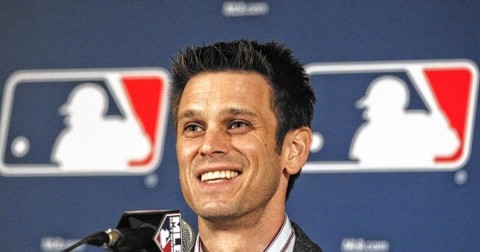 The Times posted a video, after MLB.com, with a fairly meaty 9-minute Dipoto interview.  We'll do a quasi-transcript with a bit of kibitzing - call it 80% Jedi, 20% Jemanji maybe.  You know that Dipoto would (justifiably) have objections to a few of Dr. D's phrases, so head over and watch yer ownself.

Q.  Any young players you were happy with in 2017, that made progress?

A.  (truncated) Mike Zunino made a "huge step forward" last year, was always a quality defensive player, now has "finally become a force" at the plate.

Mitch Haniger we think had a "breakout" year and will give us 5-6 years of "above-average" play in right field.

Ben Gamel at age 25 did a great job and we think "really makes sense for us going forward."

We could go on - Guillermo Heredia, James Pazos (mentioned a few times - Dr D), and "we were thrilled" with in-season acquisitions Mike Leake and Erasmo Ramirez.  James Paxton had a breakout year and will be in the front of the rotation for us.

A. (Dipoto):  So we have created a "sustainable" roster (his buzzword), where over the next 5-6 years the Mariners have a roster they can work with - using far less churn each offseason.

DRDT (takeaway):  Heredia's 0.0 WAR didn't hurt him with Dipoto, as it shouldnt'a considering the shoulder.  Pazos, Leake and Ramirez are in there.  Doesn't sound like Gamel's on much of a fence either, as we inferred from the fact that he continued to pile up huge AB's even after his BABIP turned south.

That's still 3 young OF's for CF/RF and if Haniger/Heredia are going to share CF, and the M's go for a bat in a corner the three young guys will still gain the benefits of a job-share.

Cruz in an Otani scenario is one way that works.  We Hot Stove fans can cat about J.D. Martinez or Jose Bautista.  There are some offensive bats out there.

Q.  Anything you're disappointed with?

A.  Mostly our inability to stay healthy.  We used 40 pitchers, tying an alltime record, and 17 SP's.  But we can make progress on that and this winter we'll stabilize that pitching situation.

Q.  What about the powerful AL West?

A.  We understand the clubs around us.  Not much separates us, Texas, Anaheim, (maybe) Oakland.  The best team in baseball resides in our division and it's going to take some luck to catch Houston but our job is to separate ourselves from the other three teams.

he wasn't publically disappointed with the quality of baserunning...the regression for several pitchers...and holding to C the Z.

I understand not throwing people under the bus...but isn't part of accountability letting fans know you're holding people accountable?

Given that he already

Given that he already mentioned that a couple of weeks ago, at least the baserunning, I guess it's his call how often he wants to include the issue in his ongoing offseason remarks. But I'm with you, diderot, if I'm DiPoto (and I'm not!), I'd be mentioning it frequently. Why? Because sloppy play cost the Mariners dearly this past season, and it is not a new phenomenon with this franchise. I'd want to make sure the message got through loud and clear. Injuries were a major factor, but other factors were significant. Another one was the gradual slipping away of execution with regards to that DiPoto mantra, control the zone.