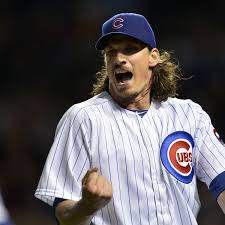 Jeff Samardzija has swagger.  His Unitesque mullet, long sharp teeth, and large snout coupled with a vicious disposition have earned Samardzija the nickname “Shark”.  ESPN quoted Shark as stating that he could get some guys out without throwing a pitch.   He just sharks em’ and he knows they are going to get out before they do.

My first experience with a player who asserted total ruthless domination over a team was Vladimir Guererro (We probably shouldn’t say his name out loud).   He owned the Mariners like no other player before or since.  His lifetime Mariners batting line was .340/.408/.606 in 120 games.  He trashed the Rangers even worse for a 1.1 lifetime OPS.  Both of these lines are significantly higher than Guerrero’s lifetime line against everyone else of .318/.379/.553. The fact that the Mariners and the Rangers were Guerrero’s division rivals is not a coincidence.  Guerrero PWNED both teams.   It is unclear what causes the trash factor.  We don’t know whether some players elevate their play against certain teams, or whether certain teams play worse against elevated players, as Shark says.  Probably both.   When Guerrero came to the plate, Mariners pitchers tried to be brave, but all they could think was “Hide the lead.  The impaler is here.”

There are Mariners players with a similar effect.  Consider June 16, 2014.  It was a day like any other, but Rangers fan !YuCanDoIt¡ had a premonition: “I got a bad feeling that Kyle Seager is going to go all Kyle Seager on us today”.  He said.  Seager did, being true to his own verb.

That game, Seager went 4/4 against the Rangers in Arlington with two doubles and three RBI’s .  As the game progressed, Rangers fans roundly cursed Seager and his ancestors.  One conceded the point.  “Yep, We are his *********.

Seager’s dominance of the Rangers is as follows:

He doesn’t play everyone like that.  His lifetime line is .262/.328/.429.   Just the Rangers have been delivered into his hand.  The Rangers getting Seagered is real, and it appears to be getting worse.

PWNership starts subconsciously, with a vague uneasy feeling that bad things are going to happen when a certain player is about to take action.  In advanced stages, a team believes that it is destined to lose to that player.  Both the PWNER and the PWNEE begin to play out their scripts of how the contest should go.  Then it does and no one is surprised by the outcome.  If the PWNEE ever wins, it is through outrageous luck and happenstance.  If the PWNER wins, all is as it should be.