Skip to main content
Guest Posts
POTD Adrian Beltre
This article is by Dr. b Kelly 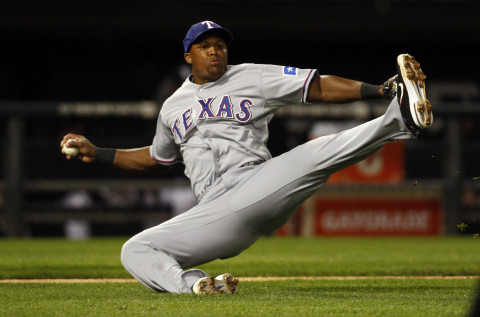 While less so on SSI and Dr. DetectoVision, Adrian Beltre and the value of his service often stimulated debate.  Now that he has retired, it is fun to assess his impact as a player.  Pulling up Fangraphs, Adrian Beltre is sandwiched between Chipper Jones and Joe Dimaggio in 33rd place ALL-TIME for position players with 84.4 WAR.  At baseball-reference it's 26th place with 95.6 WAR (they calculate defensive runs saved differently I believe).  Now it took Adrian an extra 1,200 games to generate the career value Joltin' Joe created, but that is still some impression company to keep.

Adrian achieved this value through (1) longevity -- he was an above average major leaguer at 20 and at 38, (2) sustained defensive excellence, and being a very good hitter everywhere but Safeco field. Defensively, he is rated the 27th most valuable player in baseball history (as judged by runs saved versus an average player and positional value) and the 256th best offensive player (as judged by runs created above average) or 492nd as judged by OPS+.

As a last observation, The Purple Pirate over at Lonnie's message board was convince Adrian failed under pressure and there used to be some 'entertaining discussions' on the topic with the Pirate on one side and SABRMatt on the other.  So I was curious what the win probability added statistics showed about his clutch hitting (it doesn't include clutch fielding).  The statistic goes back to 1974 at Fangraphs. Since 1974, Adrian Beltre is 106th in runs created above average and 141st in win probability added.  So maybe Adrian wasn't the most clutch hitter ever, but he performed about how you would expect.

< Previous post
KK Tribute: Sports and the Utopia of Rules
Next Post >
How to Post a Front-Page article at SSI
Blog:
Guest Posts
Tags:
Adrian Beltre