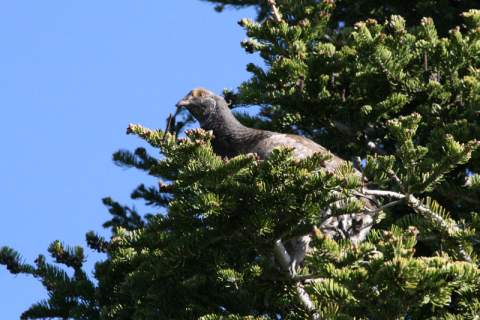 Doc instructed me to have something up on the site while he is spending a week getting a component separation technique.  I'm not sure what he is really doing this week, as I did a component separation technique on my Samsung phone, and it took less than five minutes.  The secret is the itty bitty screwdriver.  Whatever, he needs a break.   This article on crypto-zoology has been collecting dust on my laptop for almost three years.  I sent it to Field and Stream, they sent it back and then I forgot about it.  Now, its time to crack this old bottle of wierdness and see how it aged, unless you guys want to talk about how good the Padres are instead.

The Phillipines has the aswang, Mexico has the chupacabra and the Congo has the Emela Ntouka.  Ketchikan, Alaska has the sooty grouse.  The myth of the sooty grouse is as follows:  It is rumored to be the size of a small chicken, to be flat black in plumage, except for a naked bright orange-yellow spot on the neck that inflates like a balloon, it is rumored to live in the largest western hemlock tree near the steepest cliff, at the highest elevation it can find, and to give rhythmic hoots to woo grouse hens, which are rumored to be mottled brown.  These hoots are said to vibrate the ground and can burst the ear drums of anyone who approaches within 100 yards of the grouse.  As for food, it feeds mainly on the blood of mountain goats, where it makes a small incision near the ankle with its sharp beak and then laps the goat’s blood while it sleeps.  This has earned it the nickname of death chicken.

The Alaska Department of Fish and Game assumes these animals are real, and sets a bag limit on grouse at four per day.  This law seems like a bad joke, because, in the large hunting community of Ketchikan, no person has provided documentary proof of actually having shot and collected one of the beasts, ever.  Old hunters often claim to have bagged a grouse at some time in their storied hunting careers, but old hunters often lie.  One old Alaska hunter who has shot dozens of mountain goats, scores of deer, as well as moose, elk, a wolf, a wolverine, and other odds and ends, shared a single grouse story with me:

“I remember back in the 70’s, I was walking down a deer mountain, and I came to a cliff, and a grouse was roosting in a tree top, at eye level with me, and about fifty feet in front of me.  So, I got a rest with my .30-06, I placed the scope reticle right in the center of the grouse’s head, and I shot it.  I put it in the pack, and we went on our way.”

This hunter never provided photographs, a witness, a body, or any other evidence that his claim was real. Particularly damaging to his credibility is that he had a habit of keeping antlers and horns and hide from every animal he ever shot.  His wolf and wolverine are tanned and in his attic room.  He was working on what appeared to be an antler chandelier the last time I visited him.  If he really had shot a single grouse in his lifetime, he would have had the creature reconstructed, stuffed, and displayed as the crowning glory of his hunting career.

Another hunter, whose credibility is even more suspect, says that grouse hunting is easy.  He simply calls them up.  He says to go onto high logging roads, and then to blow into the tops of empty beer bottles to mimic the rhythmic grouse hoot.  “HOOT-HOOT-HOOT-HOOT”.  He says that grouse hens cannot resist it and that if you keep at it for a half an hour or so, grouse will come out of the woodwork and start landing on the road, where they are dispatched with a shotgun.  Besides probably being illegal, there is no evidence that this ever happened.  It is likely that this hunter was drinking beer at his house, blew into an empty beer bottle, and thought this sounded like what a grouse was supposed to sound like.  Then he made up the hunting story over more beer.

Being an avid deer and mountain goat hunter, I wanted to teach my young son, Paul about upland game and decided to take him grouse hunting.  The thinking behind this is that if we were going to tackle the big five, that is cape buffalo, elephant, lion, rhino and leopard, we had to start somewhere, and small children are much too noisy for blacktail hunting.  So, around the end of March, 2011, I grabbed Paul, my trusty little Ruger 10-22, a backpack and some M&M’s.  Halfway up a local mountain, I heard something that sounded like someone blowing into a beer bottle!  I couldn’t be sure if I really heard it, or I had finally gone grouse crazy, so I asked my son if he had heard it.  He said he didn’t.

We tried to follow what I thought was the hoot, and we scaled cliffs and streams and eventually ended up in a canyon with rock walls on all sides, there was two feet of snow, my son was getting chilled, and we were out of M&M’s.  The sound I heard always sounded as if it were 100 yards up the hill, even after we had already gone 100 yards up the hill half a dozen times.  We bagged it.

We have made the sooty grouse an annual hunt, but haven’t had a bird to show for it.  I thought I saw one once, but it disappeared into thin air, and I didn’t get a picture of it.  The cover photo is a supposed creative commons shot of the dusky grouse.  It is probably staged.  The dusky grouse used to be the same species as the sooty grouse.  They were called the blue grouse. Crypto-zoologists split the blue grouse into its northern and southern ranges.  Sooty grouses are supposed to have more of an orange yellow gobbler and you get three wishes if you catch one.  Dusky grouses, by contrast, have a yellow orange gobbler, and you fall into a coma upon hearing one.  Or something. Anyway, the two form a crypto-species pair, like Sasquatch and Yeti.  When one encounters a mythical beast, subtle differences in hue and plumage can be the difference between life and death.

One day, I hope to prove or disprove the existence of the sooty grouse once and for all.  Then, I can quit obsessing over the critter, and I can do something more constructive with my life.  Like finding the band-tailed pigeon.