Skip to main content
F-500 Forum
M's Free Agents, Arb Players and Super Twos
Capt. Canada has a bullseye on his back 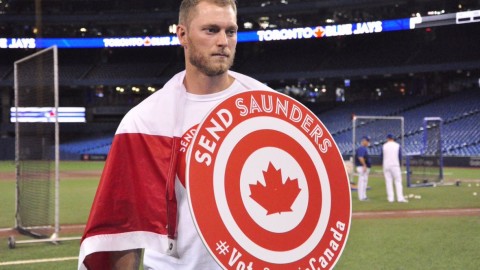 If you missed the memo earlier this year, Howard Lincoln and Nintendo appeared to pass off the baton to John Stanton and Chris Larson, who are 'fed up with mediocrity'.

Tim Dierkes relays the Super Two cut off as 1 year, 131 days.  This puts both Paxton and Taijuan well into 22% of "second year players" who get treatment as having contributed for a full year, which is only fair, since they threw 120 and 134 innings respectively.  The guess is that this will leave them making about $2.7M+ apiece next season.  In some ways, an M's fan might almost hope that would be good for their self-confidence.

Actually it's worth relaying that Jesus Sucre is Super Two, in view of Iannetta's situation, much less Clevenger's.

Am sure the M's would love to have Iannetta, Lee, and Aoki back at cut rates.  No doubt they'll expend arbitration offers to Furbush and Leonydas.  More questionable to me would be Nick Vincent and Vidal Nuno.  Y'think?

What I haven't done is calculated that cost savings and tossed it at this or that free agent target.  Cool if a Denizen did so.  Anybody notice that Mark Trumo hit 47 last year?!  Michael Saunders looks like a value buy ...

< Previous post
What is going on with Russell?
Next Post >
Real Madrid B squad scores 7
Blog:
F-500 Forum
Tags:
Payroll

I did say I hated the Trumbo trade the moment it happened. :)

I'm guessing the Mariners will tender Furbush because he won't cost much (injured players don't get raises) and of course they'll tender Martin.  I think they tender Vincent...not sure about Nuno.

I think they will try to get Lee and Gutierrez back for cheap and I think they'll sign one of Smith/Aoki...not sure what else goes down.

I doubt the M's tender a bid to Furbush. Furbush was $1.6M this year... and he has NO CHANCE of playing in 2017. A two year deal of $2M maybe, but still Charlie will be near 32 years old coming off of arm surgery.

It will be interesting to see what the M's do with Ryan Cook... he missed all of 2016 and got paid $1.1M but is basically healthy now... so he probably gets similar now... as a 29 year old... and Adrian Sampson who got paid league minimum and will probably miss at least 3 month of season next year at age 26... let alone Cishek and Zych who just had surgery and both who are questionable at best for the start of the season.

Lots and lots of relief pitchers at Dipoto's fingertips today... I wonder how much he wants to deal with the injured ones.

That does change the calculus a bit.

I'd keep Cook for depth...and I'd definitely tender contracts Nuno and Vincent.   I'd let Wilhelmsen walk though

didnt cook have Tommy John after getting hurt during rehab?