Skip to main content
F-500 Forum
How to Kill the Golden Goose
Pride goeth before destruction and a haughty spirit before a fall. 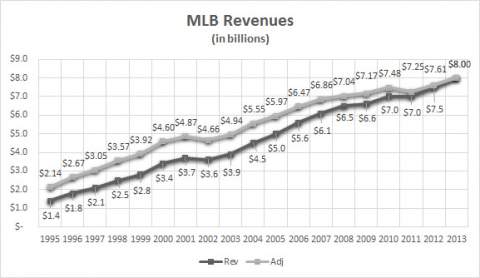 In case you haven't heard, Rob Mansfred, the new Commissioner of Baseball, is thinking up ways to make the game more profitable.  His idea is to speed up the game with pitch clocks, and to outlaw defensive shifts which has lowered run scoring.  This sort of talk should leads to sneers of derision by real baseball people.  I wish Lloyd McClendon would go kick some dirt on Rob Mansfred for us.

If a person were just going by inflation, any $2 Billion you had in 1995 would be worth $3.06 Billion in $2013.  Baseball teams are worth roughly 2.5 times the money they used to, adjusted for inflation.

Whatever the reason, the golden goose has been laying more gold than ever, and it is wise not to make any drastic changes to her diet, routine or bedding.  You cut open the goose when it stops laying, not when it doubles the production.

Considering that this is a golden goose post, a parable is appropriate:

The Montana Power Company of Butte, Montana operated from 1912 until it filed for a Chapter 11 (restructuring) bankruptcy in 2003.  The MPC was golden from 1912 until 1997.  It had stable profits, and the shares were worth a rock solid $60 to $65.  In 1997, Then CEO Bob Gannon decided (without telling his shareholders who held MPC as their stable stock) that he was bored with the stagnated profits of the MPC, and that his job had been reduced to George Jetson pushing the proverbial button and then sleeping for the rest of the day.

So, MPC sold all of its dams and generators and such, and decided to be a telecommunication company, as he wanted the company to have better upside.  The plan failed because MPC didn't know how to be a telecommunications company, and 3000 odd Montanans lost their jobs, power prices became outrageous, and many of the more heavily invested shareholders had to unretire, because their stocks were worthless.  The Parable is that MPC should have stuck with what made it valuable in the first place.

Baseball has always been the strategic sport.  This is what fans like about it.  The unique aspects of the sport, including non-uniform playing fields, no clock, no rules on where a defender can stand in the fair part of the field, and filling out a 25 man roster however a team sees fit, are fun and mysterious.  A team can abolish all outfielders, or starting pitchers, or use whatever crazy idea that pops into the managers head to give the team an edge.  The variety of bizarre fielding, hitting and baserunning tactics make me keep coming back for more.  You just never know when the next double steal is going to end in a disaster or cause the catcher to drop the ball.

The fact that baseball is getting weirder may be the reason that it is getting more popular.  Some of us like watching superior tactics defeat blunt force. to the shifting circumstances of Fortune, and how a successful leader needs to be malleable in order to, essentially, survive the down times in order to wait for the boom times during which he can make hay.

It probably doesn't seem like a great segue to the article above, but in my mind there's a link between the two pieces of writing.  In MLB you've got a system that is absolutely killing it, performance-wise, and you're hesitant to make any changes because you don't want to screw things up.  This, I think, is the same exact mechanism that saw essentially every great military leader in human history start off with a small, agile, INCREDIBLY effective fighting force that could easily defeat forces 5-10x his own force's size...but eventually he ends up at the head of a huge, lumbering war machine that seemingly has a mind of its own and isn't much better than 1:1 with opposing forces.  You reach critical mass at some point, and when you do reach that point you need to just hang on as best you can while trying to keep the thing from running off the rails.  You know that when you get a million men marching across the land, there's no real controlling anything except the direction they go, so you do your best to steer it away from the places you'd dearly like to remain standing.

So with something like baseball's reticence to improve itself seems, in my mind, fairly defensible as a wise strategic move.  *BUT* ;-) Machiavelli, and others, also are quite clear to point out that there's more than one way to skin a given cat.  Baseball, it seems, has never really suffered a downturn like many other major sports have suffered.  The mid-90's strike and the Black Sox scandal have to be the low points, no?  When those are in your top three worst moments in the sport's history, you're doing pretty darned good.  There really isn't much reason to make drastic changes...but the Hallowed State of Things that baseball leadership seems so fond of, as you recognize in the article above, is indeed a big issue for me.