Skip to main content
Dr's R/X
What the Teardown Was... and Wasn't
Alllllll aboard 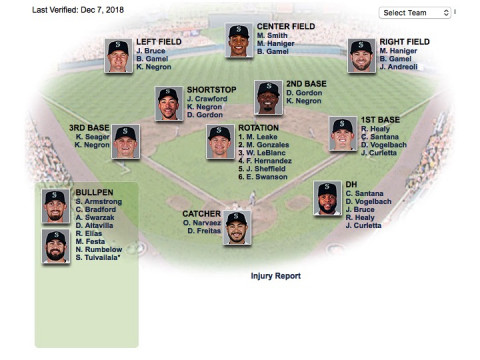 Floating around Lookout Landing, USSM, John Sickels/Minor League Ball?  Even SportSpyder, Fangraphs' individual trade reviews and scouring the earth for those Bud Light commercials where a no-nonsense king scales the walls of a prissy King of Clubs?

There was nothing, anywhere, that consolidated the M's teardown and made sense of the operation as a whole.

Oh, sure, there was snark, such as "what person of average intelligence could process this" but in terms of a real code-break of this WWII transmission?  Nothing whatsoever.  .... Which leaves Dr. D with a blank check to offer his own opinion as to what this is and isn't.

IT'S NOT A CHANCE JERRY DIPOTO DESERVES.

Since when does a GM get to ride in, decorate his office in mahogany and stainless, trade all of the previous GM's assets for his own preferred assets -- and then two years later wander into the boardroom saying, "well, that whole thing blew chunks, let's try it another way?"

.... for the purposes of bringing in a "younger, more athletic, more usable roster."  QUOTE, UNQUOTE.

This failed miserably.  Long flourish on the signature.

So why does THIS guy get to come in again and oversee the re-imagination?

IT'S NOT A CLUBHOUSE OVERHAUL THAT SCOTT SERVAIS DESERVES.

I mean, Pete Carroll had a mini-mutiny take place and they let him clean house.  But there was an important difference there.  Hmmmm.... what was it.... just had it here on the tip of my tongue.... taps chin....

A LOSS OF HOPE?

More to investigate this later, but why should this re-vamp equal a loss of hope?  To Dr. D that's just snark.  The two guys the M's got from the Yankees might easily compile for WAR than Paxton's 3.6.  The catcher they got has 3.6 WAR in his last 189 games.  Jay Bruce could bounce back.  Dee Gordon could.  Nobody expected anything from the A's; why does a :: shrug :: and a mutter guarantee no surprises from the M's?

D-O-V's verdict:  the 2015-2018 era was just another several years' worth of Mariner dysfunction, deboard the merry-go-round, next riders on please.

The most useful chart we found, believe it or not, was the simple depth chart on the M's website, at the top of the article.