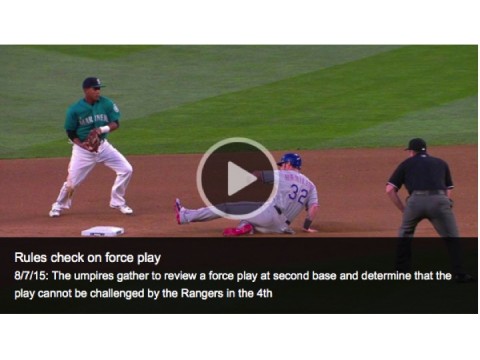 Ketel Marte was given a force out at 2B on the most blatant phantom tag we have seen in years.   The Rangers, who of course believe in the spirit of the phantom tag and who of course use it themselves, were moved to protest.  The way Some NL Team was moved to protest against Carter Capps' "Red Rover, Red Rover Send Carter On Over" pitching motion.

The umps held up the game, reviewed it, saw that Marte was a minimum of 3-4 feet away from any base in the stadium, and then sagely ruled Hamilton out.  So why did they review anything?

Here's the deal.  You see Hamilton's leg?  That is a red card in soccer, absolutely a red card with no thought attached.  His spikes are up and his knee is locked.  If the man standing up has a foot planted and that cleat makes contact with the front of his shin, you will get a Joe Theismann injury.  It happened to Arsenal three times in three years, gruesome ankle-dangling-backwards injuries.  Because of nothing more than what Josh Hamilton (of all people) is attempting to do to Ketel Marte.

Somebody tell me why runners are allowed to even consider doing this.  ... While they are allowed to do it, I don't care if Ketel Marte nods in the general direction of 2B from the outfield grass.

Browns axed us when we transition to the Seahawks.  Not until NaVorro Bowman is outed as a member of Al-Qaeda, brother.  ... though have you seen NinersNation today?  :: head down, laughs for the 100th time, ah, man :: Their sheer insanity at the quote, hiroshima hellscape of an offseason, unquote.  It's the gift that keeps on giving.

You might find Dr. D a bit out of character here, failing to sympathize with fellow human beings' sackcloth and ashes.  But as the prophet said, it's just a game, man, and if the 49ers are the most important thing in your life ... it's better you rethink your life sooner than later.  We M's fans would know.  49ers fans have not gone as hungry as M's fans have, we daresay.  Buck up and watch some football before you wind up in Safeco and taste some real pain.

But still, this 49er offseason has been like the Tenth Plague of Egypt, where the angel of death goes through sparing every AL West player who has the mark of Rams, Cards or Hawks over their door.  Has there EVER been an offseason to compare?  Where is a Bill James points system when you need it?

Anyway:  Matty 'warned' Browns that we remain 60% Mariners even in the offseason.  And even when the football version of the 1975 Reds has parachuted into our blog-o-sphere.  Sixty percent?!  Like since when does Dr. D get to talk about other stuff forty percent of the time?!  :- )

In this case, we would be glad to make this a Mariners/Seahawks blog for as long as the 1975 Football Reds are in town.  Our usual habit is to post a Seahawk article or Konspiracy Korner article or Bishop vs. Knight Ending article as a 'junior' article behind the usual baseball shtick.  Does that sound kosher, or no?  It's your community.  If you walk up and buy tickets to Hostel, brother, that's what you're going to get more of next time.

It's interesting to see that Seahawk 'net rats are lined up in solid goose-step march formation against Kam Chancellor.  It's amazing the way the billionaires can program us against the millionaires.  But that's what you'd predict, isn't it.  Donald Sutherland loses only in the movie fantasies.

Bill James has a great article up.  Which, in one section of it, argues that it's time for the USA to stick a spoon into the sludge of Corporate America and begin to break up the mega-banks and their ilk.  You don't have to be a socialist to recognize that there comes a "tipping point" at which --- > concentrations of wealth and power begin to interfere with the smooth functioning of a free-will market.  Usually right wingers and left wingers push against each other so hard that they wind up taking absolute positions:  either Walmart is angelically good or it is demonically evil.  You gotta love James' ability to see hot-button political issues in shades of grey.

Too often we get immersed in the letter of the law, in the semantics of the situation.  Judge not according to the appearance; judge righteous judgment, Dr. D has been told.

Somebody pointed out that the NFL, NBA, and MLB are horrible monopolies, especially when it comes time for Seattle to cough up $400M into a new stadium.  True, but ... sports leagues you have to see in shades of grey.  They're not exactly hurting our society.  If they are, feel free to swear off them.

No, Dr. D is not pro-Kam Chancellor.  And he likes the fact that football players don't run the asylum, the way baseball players and especially! basketball players do.  But step back and it's odd to see public sentiment against this guy turn so quickly.  It's KAM CHANCELLOR.  He and Lynch are the heartbeat of the miracle.  And Chancellor does, in fact, deserve a raise.

Not that I'd give it to him.  We're just amused at the social dynamic here.

Hisashi Iwakuma threw a pitch Friday, the batter swung at it, and then the pitch hit him in the back foot.  What is he, the right hand Randy Johnson?  The old Billy Beane grumble against Jamie Moyer, "we get better swings off Pedro than we do off him."  Like hitting mosquitos with a willow switch.  The change-speed game can be a wonderful thing.

It was Iwakuma against Cole Hamels!, and the Rangers are RED hot, and WBC-san kicked Hamels' tail up and down Edgar Ave.  You're telling me that Iwakuma isn't a TOR?

That would be like telling me Kam Chancellor isn't worth the same as all the other Seahawk stars.  Find a way to make him happy, can'cha.  If it were Microsoft stock you'd think of something.

< Previous post
The Boone, The Edgar, and the Montero (in Safeco)
Next Post >
First Mariner Who Was Younger than You
Blog:
Dr's R/X
Tags:
Ketel Marte
Kam Chancellor
Hisashi Iwakuma

Gotta laugh. Things have gone so badly for the 49ers I had to check Google to see if Navarro Bowman actually WAS outed as an Al Qeda supporter.

Re: Marte and The Neighborhood Play, right there with you.

Re: Mariners vs Seahawks, personally I think you've struck a pretty good mix as the Seahawks have DEMANDED some serious attention in the Pete Carroll era.

Re: The strangling of the American dream by the axis of mega-corporations, mega-banks, and a corrupt political class, right there with you. Just read a couple of days ago that the richest counties in America were mostly in the Washington, D.C. area.

Re: Kam Chancellor and a hold-the-line-but-find-a-way mentality. Yup. You gots yourself a real problem if you don't satisfy The Hammer. Of course what's driving this conundrum is a self-imposed NFL salary cap. If you're going to enjoy parity, you gotta put up with the salary regime that's propping it up.

Re: Iwakuma, I don't know what to think. I wish I had the confidence in his success going forward that you do. In my book health issues have derailed his promise.

... when healthy and in rhythm DaddyO.  No arguments there.  How often that will be going forward, I dunno.

Used to be there were several rent-an-aces like this, who were Ferraris for 20 starts a year and the playoffs... Cone, Tudor, etc.  Not sure such a pitcher is well matched with us...

The breakdown I pictured

I tried to respond directly to your query, Doc, about more Hawk

material.  Short answer: I like the balance, but it's going to become (right after they win the 15/16 Super Bowl) an imperative to make the Seahawks the #1 subject at ALL Seattle sports sites ;-)  Still, I'm all for making them earn it...

The Konspiracy Korner stuff, though, now there's something I'd love to see more of.  The main issue is that it does appear to be a likely place for un-SSI/DOV-worthy interactions, given our relatively small record.  I'm not sure the best way to deal with it, but have always found your interpretation of the 'moderator' role to be an extremely fair and supportive one.