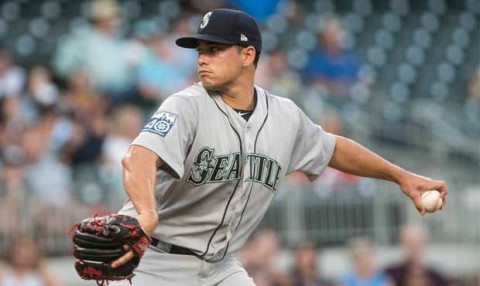 Thanks for the patience, amigos.  The last few weeks we've been doing three articles per but that's NOT the new norm by any stretch.  If I'd a known about the circumstances when doing the Patreon drive I'd have held off, trust me.  But just the same please accept my heartfelt thanks.

Sodo Mojo revisits the 2018 trade deadline for us.  They cut it as fine as re-evaluating the Tuivailala-for-Elledge deal, go through Duke and Warren and Maybin.

Sodo Mojo swoons at the five games Tui pitched before tearing his Achilles', and calls him a major asset going forward with his 4 years of club control.  Their grade at the time A-; their new grade B.

Duke on the other hand is a true LOOGY, with a piddling 5.6 lifetime K rate and no hair-fine BB rate to compensate, so if he can't come in and get one lefty there's no point.

Not included in the article's summary is Dipoto's trade of Adam Moore for Denard Span (116 OPS+) and Alex Colome (results:  scintillating; attitude:  boggling).

VARIOUS AND SUNDRY on the statistical side

I didn't know that a reliever could get 3.5 WAR.  Edwin Diaz did ... that is, he did know, and he did do it.  This tied him with James Paxton for the team lead.

I mean, I sort of knew you could get 3.5 WAR as a closer, but Mariano Rivera never did.  He got 4.3 one year setting up Wetteland and throwing 107 innings, but much more to the point, Mo averaged only 2.09 WAR per season in his career.  Think about that a minnit.

In a 19-year career as closer, Mo got 3.2 WAR twice as his highwater marks.  Excluding the one setup year.  Aside from that he never hit 3 WAR in a season.

Speaking of a piece to build around, Marco Gonzales also pitched -- pitched I sez -- his way to 3.3 WAR this year, only 0.2 less than Paxton.  Want to hear the funnier part?  That's despite the same number of innings, 150 to 161.

There are pieces here.