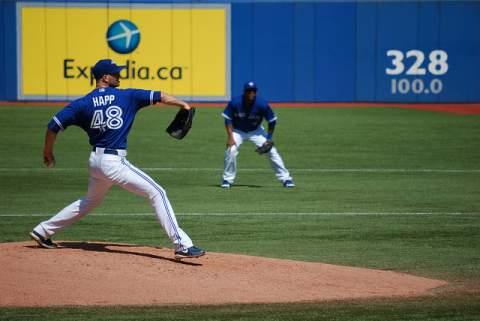 A.  Mickey will be retaining $2,300,000 for his services this year.  These services will be comprised of rehab exercises.  I'll take $2M for six months' worth of yoga, if you'd like to pay me for it.

Saunders is tall, good-looking, filthy rich and a celebrity.  Oh by the way, in terms of his medical sitch, personally I would swap him in a heartbeat.  We're not talking Shakespearean tragedy here.  The guy's got a knee.  His life ain't over.

Q.  Are some guys injury-prone?  What's the "evidence"?

A.  This "where is the JAMA article" shtick would be a pox on the internet if we heard it occasionally, but we hear it every single time.  What's the statistical evidence that love exists?

Just 'cause you don't know how to measure it, doesn't make it an old wives' tale.  If you think about it, you will realize that maybe 2% of what you believe, is based on statistical analysis.  A saber "study" is great, but let's keep it in proportion.  This one method of investigation is not The Yellow Brick Road to Truth.

Dr. D told his son (an accomplished jock) about the news.  The look on John's face was priceless.  "Yeah.  He stepped on a SPRINKLER and is out for the YEAR.  Meanwhile, Robinson Cano showered after practice, got soap in his eyes and was DL'ed until 2017."

Some guys just step on their feet wrong, you know?  Ichiro gets up for a midnight snack at his sister's, steps on a Tonka truck, and the moment his foot touches it he bounces off it.  You know what I'm saying?

Mickey is just a guy who lands on his feet heavy.  He clomps.  He's going to be in the training room.

Run Ichiro's career all over again, 25 years' worth of it.  What is the chance that, next time, he's going to step on a sprinkler and lose a year?  Yeah.  But it ain't like this is Saunders' first injury, either.

Q.  Is there anything that Saunders could do to address this?

A.  Dr. D is a big believer in P90X power yoga.  Your steps get lighter under you.  You get more in tune with your movements.  The U.S. Army is adopting it.  It's about having your feet under you properly on the battlefield.

You step on a sprinkler while focused on a fly ball, you're liable to turn an ankle.  Out a couple weeks.  Y'know.

Q.  Could the M's have predicted this injury, or is it just hindsight?

A.  It's pusillanimous to pretend the Mariners "couldn't have" predicted it.  They did in fact predict it, and publicly.  What's with saying they didn't?!

Two guys walk out of a bar ... no, really.  One of them says "I'll be okay" and he hops in his Camaro to drive home.  The other dude calls a cab.  They are both placing wagers -- one a risky wager, the other a conservative wager.  AFTER THE CAMARO GETS PULLED OVER, and the DUI is sitting handcuffed in the back of the squad car, it's very poor form for him to grouse that the taxicab guy was just lucky.

Dr. D himself enjoys risky wagers, and sometimes they bite him.  When they do, he doesn't turn around and tell his conservative friends that they were just lucky.

Michael Saunders is well capable of 5.0 WAR.  He's also capable of doodly with a double side of squat.  Zduriencik bet on the doodly-squat.  Now that he collected, he shouldn't be hearing anything other than "good call."

A.  Stars & Scrubs is risk-averse by its very nature.  At this point the Mariners have a good five backup assets ready to step in and (very possibly) play well if somethin' happens:

Having spent 2-3 years desperately hoping for Justin Smoak to do his thang, the 2015 Mariners have turned things around 360 degrees, as Blake Griffin would say.  They're well-nigh resilient.

A.  Three things I didn't know about Happ:

It must be March.  Dr. D sees Chris Young v2.0, except that Happ will be parsecs' worth of cooler.

Q.  How much are you kidding about Saunders' knee, or is this TIC provocation?

It's tough.  It's a shame for the kid.  Those guys put a lot of emotion into prep'ing for their goals.  Then, boom, Bullet Bob blasts the lead vehicle and you're back to 8th through no fault of your own.

One of these years Saunders is going to be an overnight success, Carlos Guillen-style, and when he does we hope he gets it.  That he's blessed.