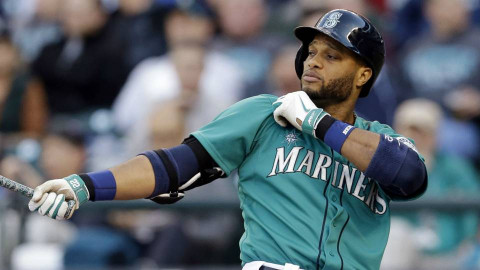 Q.  What is the basic paradigm here?

A.  The Mariners traded a fairly good regular catcher for a solidly good center fielder.

The catcher is erratic with high upside and the center fielder is dependable with a lower ceiling and higher floor.

The deal gets rid of one of the last Zduriencik holdovers.  :- /  Can't have those previous-regime personalities dirtying up your roster.  When you win it's gotta be with players you found.

Q.  Why would you deal a catcher for a center fielder?

(1) It's a "waiting for the next shoe to drop" move.  For absolute sure, Dipoto will follow this move with other deals, perhaps major deals.

(2) I think Dipoto dislikes Zuumball's erraticism and strikeouts.  Remember, the M's were one of baseball's 5 lowest-K teams in 2018.  I think the industry is juuuuuuuust about ready to turn around here and Dipoto can be given credit for being ahead of the curve.

(3) There is a discussion going on, at BJOL, as to whether slow corner OF's are becoming obsolete.  Some plays in the World Series are being held up as evidence.  Corollary:  speed in the OF is becoming a "sine qua non," an aspect of your team that you must have, according to this theory.

Ergo, it seems to the Mainframe that Dipoto is stockpiling speedy OF's, especially those who are effective with the bat.  Mallex Smith had 3.5 WAR last season, based on his .367 OBP, his 40/52 stolen bases, and his gap power.  He's a fast Denard Span.

So, you could say that there are two major faultlines in baseball on which Jerry Dipoto just hopped to the safe side of.

Q. Assuming Smith is a young star, and Zuumball doesn't crush 40 homers a year ... what do the Mariners do from here?  Robinson Cano just responded to the trade today by growling that he is the ballclub's second baseman.  Dipoto's rebuttal was a rather milquetoast "we'd like to see Gordon in the infield where possible."

A.  Cano's attitude complicates the situation majorly.  If he were to take over 1B or DH and rake from there, you'd move Gordon's fancy mitt to 2B and be sitting on a beatiful defensive lineup.  However, as so often, ballplayers want to win on their own terms, even when there is no money involved whatsoever.  Such a shame.

If you could just let Cruz go, and redeploy his $16M elsewhere, fine.  Or if you could swap Healy, fine.  What you do if Cano is ossified at 2B .... well, you've got not only Gamel but Denard Span playing LF in front of Gordon.

One interesting and encouraging thing:  Dipoto has already indicated a willingness to pull rank on Cano.  It worked over the course of a month that followed being busted for drugs.  Will it work for five years during which Cano has the ability to fracture the clubhouse?

Or can Dipoto find a taker even for the $24M Cano?  Would it require his packaging James Paxton into the bargain?  ::shudder::