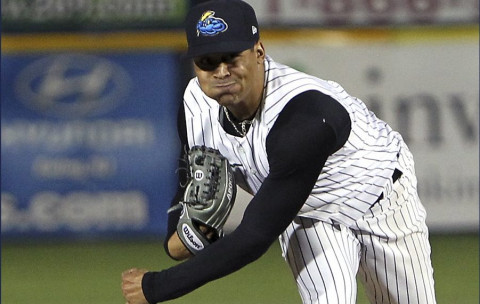 Sheffield is the #31 prospect in pro baseball; Baseball America has this to add about the 22-year-old lefty:

Originally acquired in the trade that sent reliever Andrew Miller to Cleveland, Sheffield ranked as the Yankees’ top prospect. The lefthander used a mix of three pitches that each ranked as above-average or better to blitz the upper levels of New York’s system en route to his big league debut toward the end of the season.

He starts his arsenal with a fastball that sits in the low to mid-90s, and couples the pitch with a slider and changeup that each grade as 55s on the 20-to-80 scouting scale. He throws both of his offspeed pitches in the mid- to upper 80s, and he worked hard in 2018 to take a little off of each of them to add a little bit more separation. He dealt with a minor shoulder injury this year that cost him just one start.

If he can repeat his delivery a little bit better and add some finesse to his arsenal, he could fit in the middle of a rotation. Command and control issues are scouts biggest concerns with him—they led to struggles in his first big league action last September. There are scouts who believe he will fit better as an effective power reliever.

Here is an SB Nation Pinstripe Alley that asserts the Yankees were trying to push Sheffield at the D-Backs for one year of Goldschmidt as opposed to two of Paxton.

The comments are interesting and it's amusing to review whether the Yankees' fans are more set on Goldschmidt or Paxton.

ESPN has a mini-roundtable on Sheffield for Paxton, with the obvious point collecting around these sites that Sheffield is --- > a pending ML-ready pheenom.

Fantasy Hype leaves Sheffield as a lefty Marcus Stroman, possessing a "HIGH-90's" heater and "a great cheap hold in dynasty leagues" (in other words, a profitable youngster to stick in your farm system).

And here is John Sickels from a couple of weeks ago on Sheffield.

< Previous post
What the Teardown Was and Wasn't
Next Post >
Too many bleepin' 1B/DH cooks!
Blog:
Dr's R/X
Tags:
Justus Sheffield