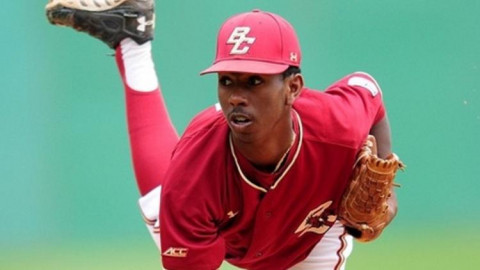 Daddy-O pointed out, quite adroitly, that owning the #31 asset of anything (Sheffield) isn't worthy of a fireworks launch if there are 32 people milling around looking for dance partners.  True dat.  The Mariners did not rake back an Edwin Diaz 4 years younger and here are a couple of pernts to take with you:

1) Teams usually don't.  Usually the top 10 prospects in baseball, if they are ML-ready, are untouchable for anybody anyway.  ... well, you might as well try to deal for Kluber.

Not one but at least three orgs scratched their heads, why would the M's take that one?  We offered better.  ... the D-O-V crunches that it was because Dipoto returned also OF Jarred Kelenick, apparently his pride and joy from the whole return, and RHP Gerson Bautista along with two salary-dump contracts.

Jarred Kelenick is 19, was a 1-6 pick, and is #62 among baseball's top 100, so places above Justin Dunn.  Interestingly, M's org #6 Logan Gilbert was was of two kids that Dipoto "didn't think would get to us" as they watched Kelenick and Gilbert.

With Lewis at 4, White at 5 and Gilbert at 6 I don't have much difficulty buying into the idea that the M's farm is top 10.  The question is, of course, whether that's an intelligent goal, to rip your Safeco ballclub from limb to limb to that that bushers look good...

The M's top 30 prospects list has Dunn above Kyle Lewis -- pause on that bus stop a moment, would you please -- and scouts him thusly:

Dunn spent most of his time at Boston College as a reliever, albeit one with multiple pitches. A move to the rotation during his junior season greatly improved his Draft stock, landing him in the first round where the Mets nabbed him with the No. 19 pick in the 2016 Draft. After a solid summer debut, the Mets sent Dunn straight to the Class A Advanced Florida State League for his first full season and he struggled a bit there, finishing the final month of the season on the disabled list. He bounced back with a strong 2018 season, pitching his way to Double-A, and then he was dealt to the Mariners in the offseason blockbuster trade that sent Robinson Cano and Edwin Diaz to New York.

Even when he struggled, Dunn was just fine pure stuff-wise. His fastball was consistently in the 93-95 mph range and he was able to reach back for more on occasion. His slider can serve as a true out pitch, flashing plus with good late bite. As a reliever, he hadn't worked on his changeup much, and it's behind the other two pitches, but he does show feel for it. He'll need it to get lefties out, something he's made some progress with. Dunn is athletic and repeats his delivery fairly well, but he has had some command and control issues.

A certain learning curve was to be expected, given Dunn's lack of starting experience, though being shut down at the end of his first season didn't help quiet detractors who worried about his size and durability. He answered some of those questions with his strong 2018 campaign, showing he has the stuff, and stamina, to start.

You could cut-and-paste any or all of that into Taijuan Walker's early minor career file folder.  Y'notice?  Not that they're stylistically mirror images, but in terms of where they are sitting on baseball's quality ladder.  Taijuan was also mid-100's give or take, would have been credited with 95 and sloppy offspeed stuff, etc.

Not bad for the 2nd guy in the deal.