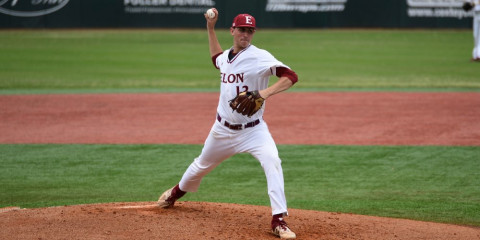 At this link rat cheer you can review a video of the young man tossing 92-98 MPH fastballs.  Yes, we say "tossed" because he's got an extreme starter's rhythm.  If Edwin Diaz "max effort" be one end of the dial, this is the far other end.  He's got a loose backstroke, a smooth throughstroke with miles of clearance, and watch how lightly he lands on his front foot.  Back in the day they'd have called him good for 150 pitches.

It makes sense that he'd have a Gil Meche throwing motion, in view of the command it must take to run a 17:1 control ratio in college.  Here is a USA Baseball article on him with lots of quotes from his manager and pitching coach.  Here's his pitching coach on the 17:1 shtick:

"It's quite a floor, ain't it?" said Elon pitching coach Sean McGrath. "He's the best of both worlds. He's a command guy, kind of what you see from a mid-major Friday or Saturday guy who's a mid-to-upper-80s guy, and he's doing it at 95. And beyond that, he's doing it probably better than most ever do it."

"... He's really taken to being able to leave the zone, because the beginning portion of this year, he was so much in the zone that he was putting guys in swing mode," McGrath said. "Then he learned, 'OK, I can pitch a couple balls off or I can pitch a couple balls up, and they're probably still gonna offer.' And he commands it well enough that even if you do it 1-0 and 2-1, you're not afraid you're gonna go walk them, and it gets called more because he has the reputation."

Here is the MLB release on the M's signing Kirby and their #2 pick, 6'6 LHP flamethrower Brandon Williamson.  A quote from the M's scouting director:

“It kind of punches you in the face when you look at it,” Mariners scouting director Scott Hunter said of Kirby’s numbers following the selection. “You actually have to ask if it’s real. With all our technology and analysis and different video stuff, it is. I don’t think anybody in the country even sniffed his strikeout-to-walk rate. Obviously it’s something we do here and we value. He fit in perfectly.”

Seattle sees a lot of upside in both Kirby and Williamson, a 6-foot-6 lefty who recovered from labrum surgery in both hips and went 4-5 with a 4.19 ERA, 89 strikeouts and 36 walks in 77 1/3 innings over 16 starts for TCU this year as a junior.

Here is a White Sox blog back in May, hoping that Kirby would slide to them, in case you're really putting off work.  :- )  But a better link than that is this one from The Scorecrow, which gives an interesting strengths-and-weaknesses analysis of Kirby.  An excerpt being

If I was picking in the 14-22 range, this would be my guy. He throws with better control than any other pitcher in this draft.

... Kirby paints the strike zone perfectly. If you want someone that can maintain control in high-pressure situations and not hand out free passes, he’s your guy. He has four quality pitches in his repertoire. His fastball can reach 98 miles per hour, but it usually sits in the low-mid-90s range. He will be able to throw harder once he continues his development. His fastball and curveball are deceptive and can definitely be great secondary and tertiary pitches. His changeup is a work in progress, but it has a nice sinking movement that makes it hard to hit. Everything points to him being at least a solid number two or three starter.

Kirby needs to work on his curveball and slider command. He throws them well, but not consistently. For those who don’t know, a pitcher having control means that he can put his pitches where he wants them to go. Command is a matter of his pitches doing what he wants them to do, such as a curveball dropping out of the strike zone. His curveball and slider tend to hang around in the strike zone at times, so this is something that needs refining.

should be able to be one of the more reliable pitchers in Major League Baseball if his development goes as planned.

.. and went on to predict that Kirby would go #14 to the Phillies.  What's interesting here is that everybody -- Baseball America, Fangraphs, everybody -- had him at #14-18, so he slid a bit to the M's at #20.  First half of the first round, say 12, doesn't sound like it would have been unreasonable.

My kind of draft pick.  If Dr. D were drafting, the light loose delivery and the K/BB ratio would have clinched it; he'd have been jacked up about getting Kirby at the 20.