Skip to main content
Dr's R/X
Five Lefties?
Wouldn't be the weirdest thing to happen to us lately 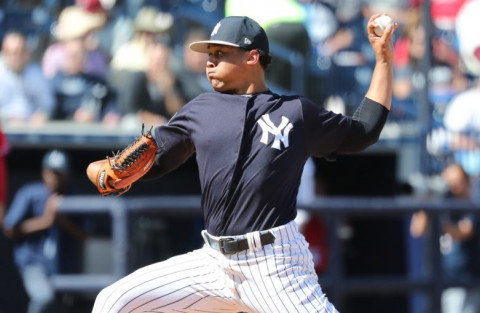 Q.  Is it possible to run five lefties?  Four?  Can you go with even three?

A.  Tracy Ringolsby does a great little piece right here that helps us with the heavy lifting.  Yes, there have been playoff contenders that ran 5 lefties together for long stretches.  Recent contenders.

So the top five starters on the depth chart not only might become, but actually ARE, lefty.  Sheffield stays down only for two months for service time purposes, about the time they have to tip the cap to Felix.  Leake is widely known to be trade bait.

I'm not saying there will be 5 lefties hard on the barrelhead, but it's worth arguin' about how many we CAN use.  LOL.)

And, it didn't hurt them to be pitching in Yankee, as it won't hurt us to be going in T-Mobile :- )

The 2016 Dodgers appeared poised to run 5 lefties:  Kershaw ... Kazmir ... Brett Anderson .. Alex Wood ... Hyun-Jin Ryu.  That was the subject of Ringolsby's piece.  Which ya excerpt right at the heart, thusly:

A key point with the Dodgers' left-handed starting candidates is they have been capable against right-handed hitters. In the last three years, Kershaw has allowed right-handed batters a .197 average, second lowest for a left-handed pitcher. Kazmir ranks 12th among lefties, allowing a .241 average; Ryu is 16th with a .247 average; Wood is 34th at .265; and Anderson is 38th at .273.

Dr. D will leave it to some ambitious Denizen to check the lefty/righty splits for Marc-O, LeBlanc et al.

The 1965 Dodgers :- ) are #7 on the all-time list of most starts by lefties at 112 games:  Koufax, Osteen and Podres.  Three other guys collected odd starts.

All that said, I'd be fine with flipping some 'spects for Kluber to balance it a bit.  True, it might be a little less fantastical to get Justin Dunn up here, but since when did Jerry Dipoto care about that.