Skip to main content
Dr's Prognosis
M's 3 ...
Sure as rain, John slides across with the winnin' run 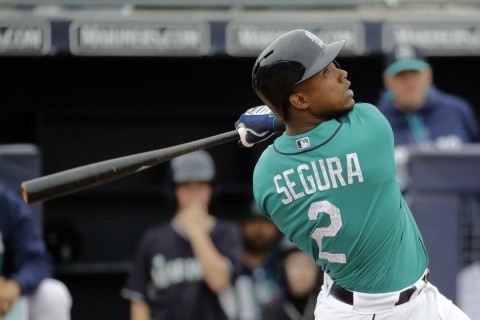 Against Michael Fullmer, it looked like the M's were going down to one of the best-pitched games of the season.  Against Francisco Liriano, it looked like the M's were going to be no-hit (and Liriano did take a no-no into the 7th).  Again Tuesday, the A's had one of their two good pitchers, Trevor Cahill, scheduled and HE had his A+ game in full swing going.

On Tuesday, it so happened that Mike Zunino hit a long, sharp LF double ... that got the benefit of a wind-blown 170 PX to clear the LF fence and tie the score.  Finally, Jean Segura scored to win the game (more in his section).

In all fairness, this isn't a recipe that wins against Houston or NYY, because those teams don't run out of bullpen pitchers.  But!  You don't play 162 games against Houston and NYY.  You've got to play .600 ball against the non-elite teams.  So be it.

Were you thinking the pesky rodent Angels would be three down to us right now?  'tis true.  J.A. Happ got 5 runs for himself -- off Garrett Richards LOL! -- and then stomped them the rest of the way, never really giving them a chance.

The Orcs are fighting viciously after three days of running on nothing but maggot'y bread, but finally we were able to put them down, pile their carcasses in a heap, and send a smoke signal to Gandalf.

(1) Received a vicious slider, below his knees and outside the zone.  Leaned over and leaned out, got the barrel on the pitch, covered it, and flined it into right field.  I think I teared up for just a moment ...

(2) When Guillermo Heredia hit one deep to the RF gap in the rain, took 3B ... whoops!, a slight bobble and HERE COMES THE PLAY AT THE PLATE ...Segura flashing his SPEED to make this 1B-to-HP play in any way feasible to start with.

(3) Courageously dove, headfirst, into the catcher's gear.  Paid the price.  Outstanding pain score on the play, but the dive made the difference between safe and out.

Segura is playing like a star, and he's part of the M's position in the standings right now.  Did you know Jean Segura means "John Sure" en espanol...

I'm enjoying watching a .439 OBP in the 2 hold and am enjoying Dan Vogelbach in the DH slot at #6.

You got me there.  Following an 80-game suspension and a broken toe?  ... the M's now have one easy out in their lineup, for at least two weeks.  BAH!! Humbug.