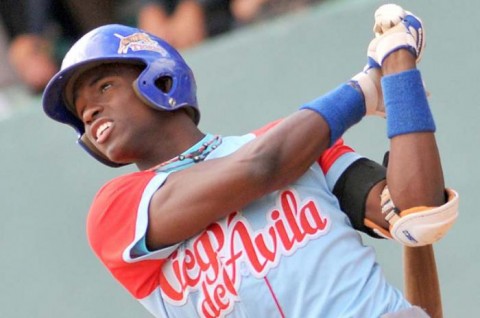 19-year-old Cuban OF Luis Robert has been cleared to sign with an MLB club on May 20th. What big market team that's not the Angels, Blue Jays, Cubs, Diamondbacks, Dodgers, Rays, Red Sox, or Royals could use a phenom center fielder? The teams listed are likely ineligible to sign him as they are limited to $300,000 or less during the current signing period.

The blurbs around the 'net have the White Sox and Cardinals connected to Luis Robert.  This is apparently the kind of kid that they've been watching since he was 15, nay, even 12 years old.  An uber-Cespedes per the scouting reports.

Other teams listed as 'not having exceeded their bonus pool limit' for 2016-17 are the Padres, A's, Astros and Reds.  Might this conceivably be why we offloaded Paul Fry, to get the extra dinero needed to make a play?

Scrubbed the 'net for some hint of WBC-San or HWMNBN being on notice as needing to perform better.  Saw not a whisper, so we are going to see both of them at least the next 3 times each.  Let's hope we get some 8-6 victories.

WAS nice, though, to see Mike Zunino get a vote of confidence yesterday.  Haven't a clue what Brock and Salk were on about.

Jean Segura IS playing AA baseball while on the 10-day DL, though the plan is for him to join us on Tuesday rather than on Friday.

If you're not traveling to Oakland for the glorious sunset (on their confidence) Thursday, we'll probably be here to live-blog the game fer ya.  In this thread.

Seriously, if HWMNBN wasn't on notice, he sure performed yesterday as if so... so, good?