Skip to main content
Dr's Prognosis
Linkables
Dr. D takes the "over" on Ichiro in 2018 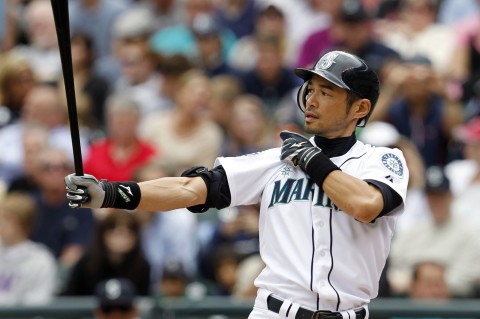 Assuming the "over" is about 10%, 20%, of course on HOF'er Ichiro Suzuki as a free agent to Seattle.  Maybe we could put gold piping on his shirt sleeves, or something?  Give him on onyx acupressure stick for the soles of his feet?

JeDi opens up / does not open up on Shohei Ohtani, and on Ichiro GASP, in this article.

"Obviously the Fighters have acknowledged they're going to post him and Ohtani himself has suggested he'd like to try his trade in MLB. We'll see where it goes," Dipoto said. "But he's an incredibly talented player. We, like 29 other clubs, have scouted him extensively. I'm sure whether it's the Nippon Ham Fighters or somebody else, they're going to be incredibly fortunate to have him."

... "I can only think of one other time that it's ever happened and that was well before I was born," he said. "He's obviously an incredibly talented player and whoever gets him will be quite happy, I'm sure. It's a unique skill set and there's a reason why he's attracted so much attention. He deserves it."

Wow.  Now we know what's up, right?  It was amusing however to hear the "Babe Ruth of Japan" tag again.  You ever try to estimate what THE Babe would get with Scott Boras guarding the mines of Smaug? ... never mind ...

"I've always admired what he's done, whether it be scouting him or playing in the same division while he was with Seattle when I first got to Anaheim, or in the years since just watching what he's accomplished," Dipoto said. "He's one of the best baseball players in history, regardless of where they've played. And as such, he should be respected.

"I think his history and legacy in Seattle is both important to the franchise and important to Ichiro. So the fact he's now a free agent, it certainly leaves a door open. That being said, we have to address our needs and in what order they go."

Now, THAT is about two blocks farther than SSI ever expected to be on this little Ichiro evening jaunt.

Back in the day, the Armstrong day, the M's used to love love love bringing back fan favorites like Griffey, and they tried to get back Omar, and a bunch of other guys.  That's assuming they could ever construct them at all.  Maybe they still do.

Ichiro has been a quality glove and his last two OPS+ are 100 and 75, so Dr. D sees little harm in rolling the dice on an UP year from the Hall of Famer.  But that's just Dr. D.  Given Ichiro's following here, and assuming there is no monstrous #5 outfielder in his way (let us assume, cough, Shohei Otani), it's not hard to visualize.  :- )

Thanks for the update on Filia, my man.  He can rope it.

And I'm with you.  I have no opposition to Ichiro coming back this way.

In 1940 Thomas Wolfe penned a classic work of American literature called, "You Can't Go Home Again." I wonder aloud whether he was thinking about Ichiro and Seattle when her wrote it. Hmm.... (tongue embedded firmly in cheek).

1. His 1st half / 2nd half splits would indicate he can still adjust and contribute.

2. I like the idea of him sharing an OF slot with Ohtani - he gets rest, and Ohtani can take the night after his starts off. And he's a good PH/PR on the days Ohtani is in the field. Really not a horrible idea for a bench bat, particularly if Gamel is able to backup 1B.

3. If the M's really do go all in (i.e., sign Darvish AND Ohtani), it's a chance to get a ring and in the uniform of his HOF days.

4. Signing him probably won't happen, but I won't be mad if it does. And if the roster size increase is approved at the Winter Meetings (to 27 with 13 pitchers max and a September roster of 21 per game with 9 pitchers each game), then the Ms *ought* to.

Arrieta had a terrific ‘15, a very good 16, and a pedestrian ‘17.  His ERA, H/9, FIP and HR/9 have increased two seasons running.  His innings pitched have decreased two years running.  He's likely not the pitcher he was in’15 or even ‘16, yet that is how he will be paid.

From MLBT-R:  I find the interesting part the last bit.  Dipoto indicates that priorities are 1B, CF and SP.  So from that, I think we can deduce that Haniger isn't going to CF next season.  See my comments on Jackie Bradley Jr. in the Santana thread.

Mariners general manager Jerry Dipoto acknowledged to reporters at the GM Meetings that his club has interest in right-hander Shohei Ohtani, though like other GMs, his comments were mostly vague (link via Greg Johns and Joe Frisaro of MLB.com). “We, like 29 other clubs, have scouted him extensively,” said Dipoto. (Johns and Frisaro note that Dipoto and VP of scouting Tom Allison watched Ohtani pitch in Japan this past September.) “…He’s obviously an incredibly talented player and whoever gets him will be quite happy, I’m sure.” Dipoto wouldn’t comment on whether the team is giving serious consideration to a reunion with Ichiro Suzuki, who is now a free agent. While Dipoto suggested that Ichiro’s free agency “opens a door,” he went on to add that he’s “not entirely sure” it’d be a priority, given the team’s needs at first base, in center field and on the pitching staff.

As has been floated many times, Ohtani is a big fan of Darvish. What hasn't been floated, but is almost certain, is that Ichiro had god-like status in Ohtani's youth. "Come play with your hero and THE legend of your youth.  Why not sell the three of them, Japanese Dream Team-style, to come to Seattle together? Just hot-stove spit-ballin', but it's an angle worth exploring, nonetheless.

A RF/DH jobshare with Cruz/Ohtani/Ichiro isn't THAT much worse defensively than we had in the Jack Z era.

That being said, the least likely of the Japanese trio to make it to Seattle, imho, is Darvish (I just don't see Dipoto paying top-tier prices on SP). Ichiro being most likely. With or without Ohtani, I'm down for hosting the Ichiro final act.

And ... it really is one thing, having ONE other guy to go with you on a trip to a foreign country.  It's another thing if it's a group of 3 or 4, another thing entirely.

Was very surprised to hear Dipoto refer to an "open door" but I think they're going to lay the transom over Dan Vogelbach's talented bat...