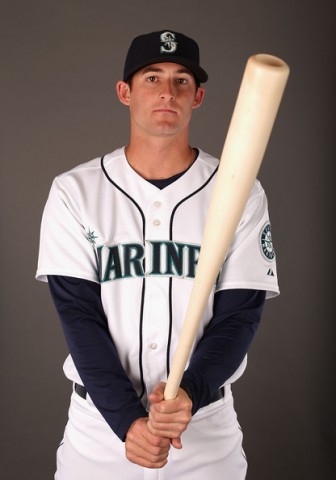 Hip-banging in the mosh pit off, um, Myself ... to the dance tune of K:BB ratio vs Reflex Decline.

The Logo has been, at ages 23-25, a league-average hitter (100 OPS+ exactly!).  This despite being mildly unlucky on balls landing on grass and on fly balls going over the fence.  The magic age for Post-Hype Syndrome is next year for him.  John Benson's fantasy maxim for major, league-winning breakouts:  Age 26 With Experience.

You may narrow your eyes suspiciously at this maxim.  However, Justin Smoak, Dustin Ackley, and Michael Saunders do not single-handedly* override an industry pattern.  And, yes, we're talking about a baseball industry, not a Mariners "industry" ... if Jerry DiPoto can help in any way with this player development thingie it will be okay by Dr. D.

When DiPoto talks about "getting more athletic," he's talking big picture, saying that the Mariners' roster had too many Jack Custs and Matt Stairses for his liking.  JeDi's vague public comments have, in a way, reminded us that there are 14 major league GM's who know the M's better than we do.

Well, better than you do, anyway.

Anyway, where can the M's get more athletic?  The entire infield is set:  2B and 3B are manned by stars, ossified as far as the eye can see. Ketel Marte can hardly be a specimen here.  OK, first base?  Among all major league first basemen, Logan Morrison is the best candidate to play in the NFL or NBA or Aussie Football League, or whatever.  What would it even mean to get "more athletic" at catcher?  You want a catcher with 8 stolen bases rather than one?

Infield ain't the idea.  And we doubt that JeDi is talking about Taijuan Walker charging the batter's box more often.  Pleasantly, outfield is available.  :: he ticks off the points on his fingers ::

(1) The Angels were top-5 in Defensive Efficiency Rating in 3 of DiPoto's 4 seasons.

(2) Bill James, who (of course) invented DER, originally guessed that the biggest key is "speed in the outfield."

(3) The Mariners used to have a good defense, under Blengino and Kotchman and Endy Chavez.  But this year they were -7 runs, -24 runs, and -12 runs in LF, CF, and RF.   YOWWWWCHHHHHHH

(4) DiPoto singled out Seth Smith for praise.  He likes "lengthening" the lineup.  There are no absolutes in baseball.  If your best Scrub is not athletic, you ain't directing this comment at him.

Honestly, kids, you find Dr. D a team where all OF slots are very minus defenders, and he'll find you a team that underperformed.  Well, you know what he means.  We've been watching this factor since the 116-win Mariners.  Find a puzzling team for overperformance or underperformance, and the FIRST place you check is whether the OF gloves were 0-for-3 vs. 3-for-3.  Kansas City last year was +20, +20, even.

Teams that have three bad OF gloves, or three good OF gloves, there is often a "tipping point" there, a critical mass issue.

:- ) Well, that's not really all, but you see one decision that is resolved.  According to this logic.  The position player to add would be in CF.  And the interim GM wasn't gaining a lot of ground by trying Stefen Romero there ...

Like who?  Denard Span, Dexter Fowler, and (um) Austin Jackson I think are free agents.  No need to laugh; AJ and Edgar haven't yet had their crack at a ballroom dance, and AJ used to be one of baseball's top 20 WAR players.  The good news about buying Span?  He just signed on with Scott Boras.  Gear up for the leatherbound copies of "Denard Span:  a Historical Perspective" featuring more glossies of Tris Speaker than it has of Scott Podsednik.  (Though Boras settled for a 4/$48 deal on Michael Bourn a year or two ago.)

But Dr. D fancies more the idea of trading for a young developmental player you believe in.  Not a thing wrong with selecting CF as your slot for that; at least you can say speed never slumps.  You get a baseline 1.0, 1.5 WAR from a fast rookie CF ... unless perhaps you're talking about James Jones.  Don't be surprised to see Miller LF - Jones CF - Money Elsewhere - it would be a manifestation of DiPoto's personal tastes.

We're sure the Twins would cough up Byron Buxton with little encouragement.  Where's G when you need him?  What would be a feasible hijinks to bring in a talented young CF?

Brad Miller in CF?  It ain't out the window.  The M's will use their geometry algorithms to make a call there.  Just pointing out that "more athletic" looks like either, Move Over Brad, or else bring in a gold glove left fielder with Colin Cowgill's bat.

Tomorrow's news today, babe.  First prediction post-DiPoto was that we could all grin, rub our hands until they burst into flames, and get ready for a 2016 Iwakuma.  Lo and behold, here's DiPoto's full-court press.  Which was okay by WBC-san, who had already begun his own full-court press on the Mariners.

I wanna see the megawatt smile in the postseason.  You?

So the Mariners have three objectives this off-season...find a real CF...could be Sam Fuld even...someone who is +20 runs on defense, even if they don't hit much...find a 6th starter cheaply to back up the youngins.  Find three cheap, effective relievers.

That might be a Prime Computation even, a low-rent Scrub band-aid who makes the M's more athletic for 2016.  You put Brad Miller in a LF and you're almost an athletic club by virtue of that alone ... :- )

What are your thoughts Matty on a 34-year-old Fuld vs. Shawn O'Malley and his glossy 11:12 EYE in a two-page "sample"?

O'Malley isn't a plus CF

He can play CF...but he's not plus out there.  I keep him around...he's an interesting young player and under DiPoto, he's probably going to get a chance to play around the field (he likes flexible guys)...but he is not a starting CF.

Fuld was just a name I threw out there as "this guy is basically free to have and is a plus CF"...there may be better choices...O'Malley ain't it.

DiPo could as easily be talking about RF, where Cruz and Trumbo have roamed, er, lumbered this year. I note that they put Miller out there the other night, not to good effect, but give the kid break.  Fuld is a nice bench guy but that's not where I'm aiming. I think someone more like Dexter Fowler is more likely.

"Where Cruz and Trumbo have lumbered" HEH!

Absolutely.  The OF generally .. that seems to be the place where the Corporate Policy could be implemented.  We underlined Miller-to-LF a bit tongue-in-cheek, but Miller moving left instead of right will be a twin "athleticism" upgrade.

'course if we're talking about an OF of Miller, Seth Smith, and Guti in the corners, that's basically what I was saying above, whichever flank you go with.

He's flashy...scouts THINK he's good defensively...but the numbers have never been there.

So I don't think that's the way to go.

During my B-R scan this morning, I was looking at the International League and trying to find a "young" CF with resume of good CF leather:  I can't figure out how to do a CF AAA search...so I have to wade through each team!

Ben Gamel in Scranton, Dalton Pompey in Buffalo, Darin Mastroianni in Syracuse, Jackie Bradley (who has a +dWAR CF MLB glove), Julio Borbon in Norfolk (he was a +1.4 CF glove in Texas in '10), Trayce Thompson in Charlotte (But he's had a great initiation for the White Sox and may be off-limits), Abe Almonte (Really!) in Columbus, Daniel Fileds in Toledo.

On the other hand, we do have a + CF glove on the squad.  It would mean you move Marte off of SS, however.

The Yankees didn't seem to think that Flores was a CF guy, but liked him in LF.  I'm assuming they were right.

And I reiterate, I would give Kivlehan a ton of CF reps this winter.  I want to see what he has there.  He's certainly "athletic!"  He'll hit 20+ homers, too. I don't know if he has the CF chops, but I want to see.

And I bet you could get John Jay from the Cards.  The Cards also have Rafael Ortega down in Memphis.  He has a gawdy RF/9 in CF this year, and a great eye.  Check him out.

"We have a plus CF on the squad"

That's funny too.  :- )  Given the backdrop of your previous kibitzing.

I like Pompey a lot, for example.  Bradley ain't goin' nowhere...not after his hot finish to 2015.  So...you're looking at Mastroianni (who can't hit even a little bit), Pompey (who also struggles with the bat but is hilariously fast and has some pop) or guys who are less polished than that for cheap options.  Now John Jay...THAT is interesting.

++ Ben Gamel in Scranton, Dalton Pompey in Buffalo, Darin Mastroianni in Syracuse, Jackie Bradley (who has a +dWAR CF MLB glove), Julio Borbon in Norfolk (he was a +1.4 CF glove in Texas in '10), Trayce Thompson in Charlotte (But he's had a great initiation for the White Sox and may be off-limits), Abe Almonte (Really!) in Columbus, Daniel Fields in Toledo.++

I don't suppose we could sweet-talk you into your opinions on each of the above... I ran into the same problemo; if you want to Google the stock of ML-ready center fielders, where do you go?

Also, there's the issue of Buxton-type players who just did hit the majors.  Might take a big trade to get one...

I like Marte's SS work. He seems better defensivly then Miller and he's a good lead off hitter so far. I think I'd see if we could trade Taylor or Miller for a close CF prospect. Probably impossible.