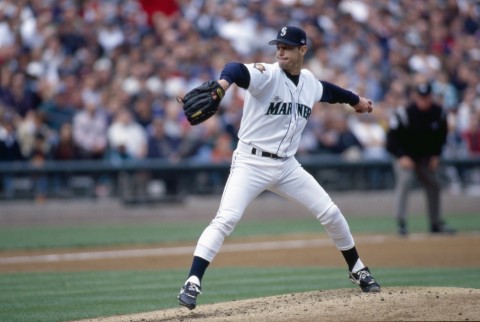 You kids probably think that Jamie Moyer threw ERA's of 2.18.  He did not.  He pitched his game as perfectly as it can possibly be pitched, and THAT one you can believe.  He hit the mitt with his 88-MPH fastball as often as any pitcher hit it who ever lived; he had a wipeout David Wells bloop 11-to-5 curve, and he had a fadeaway changeup that is one of the best changeups baseball has ever seen.

He had it all.  And he delivered it perfectly, with tremendous braininess and strategy.

But here's the thing.  A pitcher of that template, of the Tommy John template, can never dominate the way a Kershaw or Paxton can.  Baseball isn't built that way.

His ERA absolutely crushed his FIPs -- in the Kingdome!  That's the tribute to his deadfish changeup and his pitchability.  "We get better swings against Pedro than against Moyer," moaned Billy Beane.  Moyer was one of the first guys that we sabes realized was beating the .300 BABIP; he was .270.  ...and we argued about it for five years before allowing it was a Moyer skill.

Earlier this spring I thought Marco was having some hot games, in terms of his "clamshell" command.  Ball hits the pocket, catcher clamshells the top of the glove down over it.

Today it was totally crazy.  I haven't seen command like that since Jamie Moyer.  He changed the eye level, he went in and out .... just a long string of 50's on the dart board like Felix Hernandez wishes he EVER had thrown.

There's also the big 2-plane curve, an excellent comp to Moyer's, and he keeps it down.  He'll rip off that crackling curve, outside on the black, and just below the knees.... he's got an after-tell.  When he extends out a touch more, to get below the knees, he stands up and hikes his jersey back into position at the shoulders.

As Matty aptly put it, the change was consistently + today, not ++.  Moyer's was always, every game, +++.  There is of course hope that Marc-O will develop his change further, back to where he already has shown it, in 2013.

But then again Marc-O throws a hard slider as a 4th pitch, commanding that too; right away, how many SP's command 4 pitches as rookies?

And Marc-O throws not 87, but 92-94 MPH if the broadcasters are to be in any way believed.

These twenty years, across STATS and SportSpot and DOV and SSI and everything in between, have you ever heard Dr. D compare any M's pitcher to Jamie Moyer?  But Marc-O's command simply drops your jaw.

It's not in the nature of such pitchers to be unhittable.  Marc-O is not going to run an ERA of 2+.  But he looks like a plus #3 major league pitcher to ME.

That kind of command

with that kind of arsenal *might* put him closer to Prime Cliff Lee than Prime Jamie Moyer, no?  Moyer was indeed amazing with his control and that changeup--one of the best in the history of the game--but he could never take control of a game like Prime Cliff Lee.  Moyer's was the most successful high-wire act in the history of the game outside of knuckleballers, but Lee's dominance almost felt inevitable during his prime.  For a guy throwing 92+ with pinpoint command AND a formerly-80-grade-changeup AND a pair of legitimate breaking pitches that he can throw where he wants to?  Yeah...that's a special piece.  It's not Paxton or Felix, but it's probably just a tier down from the latter in terms of upside.

With the possibility.  His K/9 during the spring was higher than Moyers 8 year stretch, but so was his BB/9.  H/9 significantly lower as well.  Seeing him repeat it into the season and through years is the only question remaining.

On paper the Cliff Lee comp makes sense, but...

Lee was simply the best pitcher in baseball at the top of his reign, a baseball immortal ..... in the words of Bill James, let's see if the kid is good before we ask whether he's great :- )

But far be it from Dr. D to take a No Cheering in the Press Box tone with yer.  If you like his chances to make a run at Lee's echelon's, you keep right on pushin' that ...

Moyer ran that 8 years as a plus #2 (126-56 record too, age 33-40)..  So maybe here's your second Leake level starter behind Paxton and Felix.  The picture gets clearer.  The rotation looks fuller.  This wasn't Marco's first pinpoint start this spring either.

Though the results are very good

There is something not yet "there" with Marc-O.  It is pitch sequencing, or confidence with the cutter and change, or something.  He was executing this or that pitch well, but not game managing IMHO.

The other thing Gonzales has that he's had since college is "mound presence" aka "the guts of a burgler". Like Jamie, and Jason Vargas, and Cliff Lee, and Derek Holland, he's not afraid to throw HIS pitch, and take the consequences. Jamie gave up the MLB record # of home runs - but Safeco really helped him. Other than 2004, his Safeco HR/9 numbers are quite good. So it may be with Marco. His BB/9 can only be helped if his natural tendency to challenge batters doesn't result in 1st-inning HRs or triples.

Kershaw,, the Big Unit, and Paxton are in another class; Cliff Lee, maybe also. But with Derek Holland (who threw a bit harder) and Jason Vargas (who didn't throw quite as hard, but harder than Jamie), you have a couple of pitchers who majored in guile and control and trying to avoid hard contact. A rotation of a rejuvenated Felix - Paxton - Leake - Gonzales - whoever (Kuma by June?) is going to win a lot of games. It may be that Paxton can go 18-6, while Gonzales is 14-10; but every game over .500 counts big.

Nice to see the man drop by!

And give his update on his old adopt-a-player.  You've got a chance to look VERY good on this one, bro'.

Points well taken on Gonzales' makeup.  It can be seen in his body language, and again today he controlled the damage (with men on 1B-2B or 1B-3B IIRC) 2-3 times quite neatly, just like Jamie used to.  Sniff.  I think I'm going to cry.

Yes. Several stadiums down there have guns and display velo on the "big screen", even if it isn't on game day. Blowers is pretty careful not get too rah-rah; I think we can believe him.

If you haven't seen it yet, check the full YouTube video of Zunino catching a recent Marco pen (sorry no link). It's fascinating and amped me up for MG.

Zuumball's energy in general, and he obviously was positive about our boy.

Not to sound off-tone but a cut fastball is not rocket science; if you have a gloveside fastball, it's going to set up your armside fastballs.  Question in my mind is how many cutters a game Marc-O's elbow can take.

First indication on that will be the F/X against the Giants.  He only needs about 12 per game if judiciously used.  Cutters can be supplemented a bit with a tight-spin slider like Marc-O's.

I didn't see the game, but is he really throwing a cutter? Never did before near as I recall. And it was the cutter/sinker combo that turned Cliff Lee into an unhittable machine.

If what you describe of Marco's control is sustainable, that'd be enough almost no matter what he was throwing. His off-speed stuff is good enough that if he truly commands the fastball he'll be the best 3 in the AL. I'll have to see it to believe it, but maybe all he needed was confidence and he seems to have that right now in spades.

His elbow is back, at least from now, and he's driving the cutter in over the righties' hands.  He's throwing the changeups to LHB, even, as a TJ sinker to hit the shins.