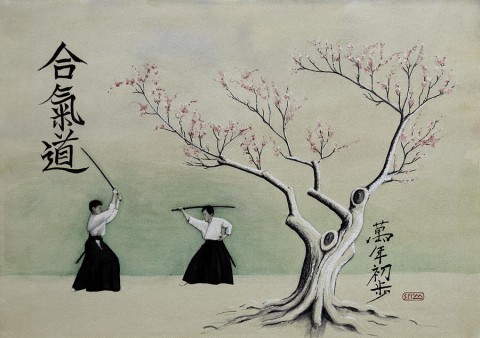 In some parts of Japan in the year 2016 A.D., police officers are required to have a black belt in aikido.  If you train on the mat with American cops, they all use kludgy aikido moves that date back to when people like Gozo Shioda sensei first came to America.  Kludgy versions of it, he says?  He means it in the humblest way possible.  Most policemen have had two hours of aikido and didn't know it.  That's how organic these movements are.

Steven Seagal, for real, is one of the finest aikido practitioners who ever lived.  They didn't want to promote a gaijin to 7th-level black belt.  7th is a spiritual award for artistry.

Aikido, uniquely among martial arts, can be taught in U.S. penitentiaries.  Its moves are 90% defensive and its spirit is that of reconcilation rather than anger.

It's the best martial art, not to make a value judgment.  Best in terms of what it does for you as a person in the 100% of your life that does NOT consist of fistfights. It could come in handy if somebody took a swing, but it transcends that.  Which is good, considering no martial art will ever be used on the street.

We hadn't visited this concept lately, the concept of "Why don't we listen to Nippon baseball people more than we do."

Don't have the time to cut all the still shots for yer, sorry.  So open a 2nd window if you're innerested...

At the 0:50 mark on this video, you can enjoy the remarkable suddenness.  Check out the stillness of the bat head before launch.  Dr. D has no idea how you hammer a nail without raising the tool first, but some athletes can.  Google Bruce Lee's four-inch punch.

Ted Williams' first rule of hitting was "be quick - quick!"  You, the esteemed SSI denizen, don't spend 80% of your Vogelbach time scratching your head over his HR numbers.  You review all the videos watching his quickness at the plate.

Does the "quickness" skill translate from AAA to the majors?  Easier to sympathize with DiPoto's greed for Vogelbach after you watch six, eight minutes of Vogue through the quickness lens.

At the 0:10 mark on this video (and in a few other spots), you can watch him slow the bat down on an offspeed pitch.  Like Ichiro did, like Cano does on those lasers into the corner and like Ketel Marte does.  Except if you watch closely, you can see Vogelbach's willingness to move his CG around to match a pitch, unlike Cano and Marte, like Ichiro.

This Fangraphs post is a pretty fun read on the HIT tool.  Don't agree with all of it, but Kiley McDaniel takes "bat control" to mean the decelerated bat we (and Bill James) have talked about so much.  We'll agree to disagree.

But think about it.  When's the last time you watched a Major League player, other than the three guys we just mentioned, take that little arm swing and square balls up the other way?  If that's bat control, how come only Wade Boggs and twenty other HOF'ers have it?

Does the "emergency blonk to LF" skill translate up out of AAA?  You ever need to hit something you weren't predicting?

By the way, at the 1:05 mark on the above video, you can watch Vogelbach thrash a pitch down the 3B line.  He does so on purpose, visibly.  Way cool.

Somewhere along the line we mentioned about lefty hitters needing to beat the shift in the year 2030 A.D.  Honest question:  do you think Jerry DiPoto was thinking, "here's a lefty with OBP who has pre-learned how to defeat shifts"?

By by the way, for those of you who still remember Alvin Mr. Mariner Davis, the sudden launch and the compact followthrough, enjoy swings like the one at 2:05.  The one at 3:30 is also Alvin and shows the uppercut potential lurking.

At 3:45 on the "Best Wishes" YouTube you can see the raw power.   Words would only clutter the visual.

Grok 3.5 too:  that last Vogelbach homer got much of its power from the lefty pitcher.  These days all the relievers throw 95+ MPH.  Perhaps even after Edgar is done with him :- ) Vogelbach will retain the memory of how to let the pitcher supply the power ... handy for those pesky rodent Matt Bush types hanging around the AL West...

Earlier we compared the "take what they give you" attitude to Kyle Seager's.  This attitude allowed an open learning curve.  It's the essence of aikido's "turn when pushed, enter when pulled" philosophy:  LISTEN to your opponent.  Seager is the anti-Brandon League.  At first take, it seems Vogelbach is too.

Aikido uses swords, by the way; the sword paths are similar to the paths of fists, but elongated so that you can grok the interactions.  The painting above is called "Always Beginning."

Some athletes think their pre-fabricated pitch sequences should always work if only executed perfectly.  Other athletes, like Russell Wilson, are always beginning.  Dunno about you, but I never tire of the life lesson we got in RW3 vs RGIII vs Kaep vs Johnny Football.  That's what sports was about back in the day, character.

That much value judgment over a baseball swing?  Sure.  A sports person's sports motion tells you about him like Mark Twain's books tell you about him.  Bill James started* his Abstracts by admiring the way good defense correlated with Nice Guy.  Barry Bonds, on the other hand.  Where does practice time on defense get you.

G-Money had the quip that if Vogelbach's plane had banked 45 degrees in Montana and headed down to Oakland, you could be sure of Vogue becoming Beane's next Jason Giambi.  Heh.

Hey, Dr. D didn't sit down to become charmed by Dan Vogelbach.  The aiki mechanics did that all by themselves.

< Previous post
G-Moneyball on Dan Vogelbach
Next Post >
We Will Buy and Sell, and Get Gain
Blog:
Aiki Mechanics
Tags:
Dan Vogelbach

I just like the way he swings the toothpick

And it DOES look like a toothpick in those big paws. Easy wrists, really strong hands and forearms, simple motion and good rotation.  He can arm-swing for doubles the other way when he wants or rear back for serious pull power.  If Gar can get him to hit the same all the time, keep his weight back and trust his natural power instead of "Gearing up" for a fastball... yeesh.

His one big problem (staying back on off-speed stuff and not getting out on his front foot) is what Gar has managed to address with Martin already this year and Martin's power has gone through the roof as he's now able to drive that off-speed junk.  Give Vogelbach some time with Edgar and I expect good things - the raw material of his swing is really nice.

I keep forgetting the hands thing

Ever hear the story about Frank Crosetti and the way he squeezed a rubber ball all the time, on the team plane, etc etc ... weighed 165 lbs. and could bring anybody on the team to their knees in a handshake ...