Skip to main content
F-500 Forum
Kris Bryant to AAA
Boy, it must really stink to be Kris 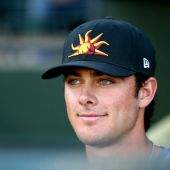 There has been discussion around the 'net:  are there any ethical issues that bear here?  Personally it bothers me, vaguely, that Kris Bryant is one of the Cubs' best 25 players, that he has earned a spot on the Opening Day roster, but that the Cubs are about to go through the motions of pretending that he has not.

The best arguments on the teams' behalf are apparently:

I think those are strong arguments.  But here's the deal-io.  Theo Epstein is swearing on a stack of Bibles that finances have absolutely nothing to do with the decision.

Mojician can educmacate me on "implied admission of guilt."  If there isn't a thing wrong with delaying a player's free agency, why not say that this is what you're doing?

Epstein also says that no decision has been made yet.  Why would he say that, when it is obviously not the truth?  Why not announce the TRUTH:  that under a different system, Bryant would be in your lineup, but under this one, he's being held back a while to make more dinero off him?

Epstein says that he has always -- 100% of the time, no flaws in his 13-year track record -- kept rookies off the Opening Day roster because:

“When you weigh all the variables, thus far over 13 years, it’s always landed on the side of sending the player back to Triple-A,” Epstein said. “A.) To get in a good rhythm in games that actually count, so he can come up at just the right moment. B.) So you can preserve depth and give other players opportunities. C.) So he doesn’t have to deal with the weirdness of Opening Day, when even veteran players feel kind of off their games. D.) So if there’s an adjustment to be made to cold weather, it can be done in the minor leagues in a better environment.”

So he's weighing variables, and it just so happens that it's always best to send the rook down.  But he'll let you know how it goes this time.

In reality, we all know that Epstein is bolstering his legal position with these quotes.
....

Nolan Ryan used to answer questions about cheating (stepping in front of the rubber) by saying, "Those things are part of the game."  That's a lot different from Ryan Braun's reaction to charges about cheating.

Lying is seldom ever worth the price paid.  It works in the short term but usually the waiter presents his bill.

Prov. 20:17Bread obtained by falsehood is sweet to a man, But afterward his mouth will be filled with gravel.

John Hart on TV, when he was in between jobs, gave an actual straight answer, which I enjoyed hearing.  "You'd like to gain the extra year, all things being equal.  But it doesn't play in as much as people think it does.  Generally you want your best 25 on the roster."

For him, it didn't.  And for me, this is an ethical issue.  I would solve it by changing the rules.  Maybe:  if a candidate rookie plays a game in AAA, he can't come up for 45 days.

It's a situation I hate to see.  Would welcome other camera angles.